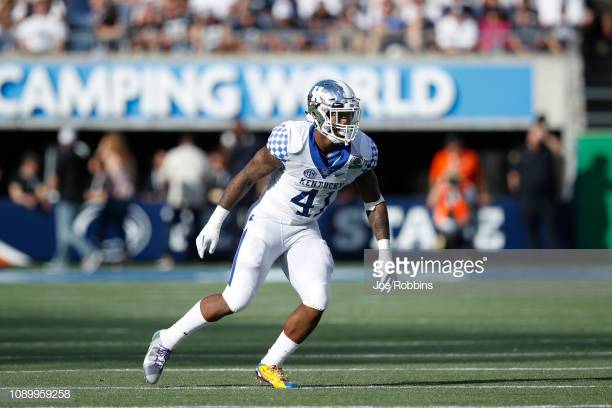 – Fantastic size and build, doesn’t need to grow into his frame
– Excellent get off, definite threat off the edge and capable speed rusher
– Shows ability to bend the edge and better flexibility than expected for a man his size
– Hand use improved from junior to senior season, does much better job defeating blocks and disengaging in the run game
– Played in a 3-4, used as an outside linebacker, spent plenty of time off ball and dropping into coverage
– Playmaker in coverage and uses length to his advantage
– Great closing speed and shows an impactful finish
– Creates space as a pass rusher because of his arm length
– Statistically productive and finished career with a remarkable senior season
– Experience at both outside linebacker spots, though most often spent time in the boundary
– Asked to wear a lot of hats defensively, playing off ball, split over receivers, stunting, should transition to NFL faster than others
– Good football IQ, reads tackles sets and able to counter when given two way go as a pass rusher

– Needs to get stronger in the run game and with his bull rush, want to see him play to his size more consistently
– Plays a little too high on non speed rush moves, can expose his chest when attempting to swim and get stalled out
– Will get upfield too far on some of his speed rushes, needs to counter quicker and more often
– Could stand to finish more plays, left some sacks/TFLs on the table

If there’s a guy I’d want to start this draft process with, it’s hard to top Josh Allen. Allen may literally be a top five pick in this year’s draft as a premier pass rusher, which is a shame for Steelers’ fans, since he’s likely to be far out of their range, even in a trade up scenario.

He’s built similar to Bud Dupree but his game is plenty different. The biggest contrast is Allen’s ability to turn the corner. An area Dupree struggled with coming out, and still does, a reminder that stiffness like that is tough to change. He combines a fantastic first step with the flexibility to turn upfield and finish the play.

In part, what led to his jump from his junior year, recording just seven sacks, to his senior season, where he racked up 17 of them, was his hand use. A little underdeveloped his junior season and it didn’t always let him turn the corner. Take these two plays, the first from 2017, the second from last year.

2017: wins the edge but can’t knock the right tackle’s hand down. He wraps around him, and Allen can’t finish the play, getting worked upfield.

This year. Same speed rush. He’s able to knock down the inside hand of the left tackle, cleanly winning the edge, and recording the sack of Nick Fitzgerald.

Maybe some of that has to do with coaching. I obviously haven’t followed Kentucky too in depth but I remember Dupree saying he didn’t have an OLB coaching in college. The Wildcats have a good LB coach now in Brad White, who spent the last several years with the Indianapolis Colts. And I think that’s been beneficial to Allen’s career.

Allen is definitely going to be comfortable dropping into coverage and doing all the things linebackers will have to do in the Steelers’ scheme. He dropped into coverage all the time. Mostly in simple zone schemes, the hook/low-wall defender and funneling receivers, but he still made his fair share of plays.

This breakup on a two point try against Florida in September. A scramble drill where he made a diving tip to force the incompletion.

And this one in coverage near the goal line against Texas A&M.

The biggest issue I see in his game? Aren’t a lot of clear flaws but I want to see more power on his bull rushes. For a guy his size, he should do more damage and be more of a power/inside threat to tackles. Watch him struggle in his bull rush against the RT (#65). Steps aren’t in sync with his hands and the tackle is able to anchor.

Still, in a league where you need great pass rushers, Allen is one of those guys. It’s too bad he’s probably gone long before the Steelers get to turn their card in.