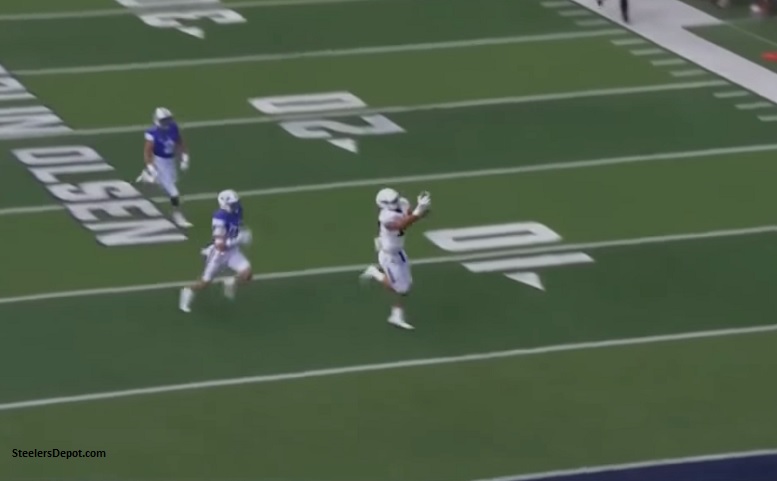 It may seem odd that out of all the possible prospects at hand, I have chosen a tight end from Utah State to begin my draft profiles with. You might even be asking why you should even care about a tight end. I promise though, that if you bare with me, you will not only come away impressed but you will also leave caring substantially about Utah State tight end Drax Raymond.

The NFL as we know it today is all about matchups and versatility. You will not find more importance in the match-up aspect than at the tight end position. A modern-day tight end has to not only be able to block as both a run blocker and pass protector but must also be able to be an effective receiving threat against linebackers, cornerbacks and safeties. Raymond fits the bill on all these requirements.

Whether it be as an in-line tight end, an H-back or split out wide, Raymond shows comfortability and success in all three alignments.

Starting off with the traditional in line tight end role and also a play the Pittsburgh Steelers run from time to time – the tight end screen. Raymond begins on the left side of the offensive line, slips behind his blockers and is off to the races from there. The Utah State tight end showcases his elite speed, which may be tops of the tight end class and heads to the endzone for a 30-yard catch and run. Raymond is not only showing first gear speed here but also second level burst as he blows by everyone, that alone leaves his ceiling high when it comes to his yards after the catch ability.

He can catch from the formation and Raymond is also more than capable of delivering a block from the formation as well. Lined up beside the right tackle, the Utah State tight end chips in on a block and drives the Michigan State defender backwards, paving the way for an easy touchdown. Here is just one of the many examples of the versatility I spoke about earlier.

Where tight ends are getting all the glamor for their play in today’s NFL is their play out wide. Well, at 6’5 and 250 pounds, Raymond is a nightmare to cover out wide as he is just too big of a mismatch for defenses to cover. On the play above, he is going up against a zone coverage but he shows good ability to find the soft spot and is able to reel in a high throw for a huge first down. He has good hands, though they will need to be more consistent as he also had a few high point drops sprinkled over his tapes.

There is a huge reason why 28 of Dax’s 41 receptions in 2017 went for first downs. His football IQ is just off the charts when it comes to recognizing zone coverage and immediately getting his head to the quarterback when he finds the soft spot. He does it again above, turning his head back to the pocket as the defender lined up across from him heads toward the flat.

Let’s not forget the H-back position where Raymond also showed comfortability and success during his time at Utah State. The play breaks down here but focus on #87 who stays on his toes and ends up delivering a crushing block to the San Jose State defender. Once again, this is a combination of his football IQ and mean streak showing its value.

Raymond is interesting, even intriguing as a prospect and could be one of the bigger sleeper tight ends in this year’s draft. It would come to no surprise to see him shoot up draft boards should he put on a good showing at the Senior Bowl and NFL Combine.

Will the Steelers look at tight ends during this year’s draft? Possibly, but that may ultimately depend on the future of Jesse James. Should James depart in free agency, do not be surprised to see the Steelers grab a tight end during the NFL Draft. With Vance McDonald’s injury history, the team would be foolish to not grab an adequate back up. Raymond would make sense as in that regard and should he remain on the board long enough, it would be a great move to make.