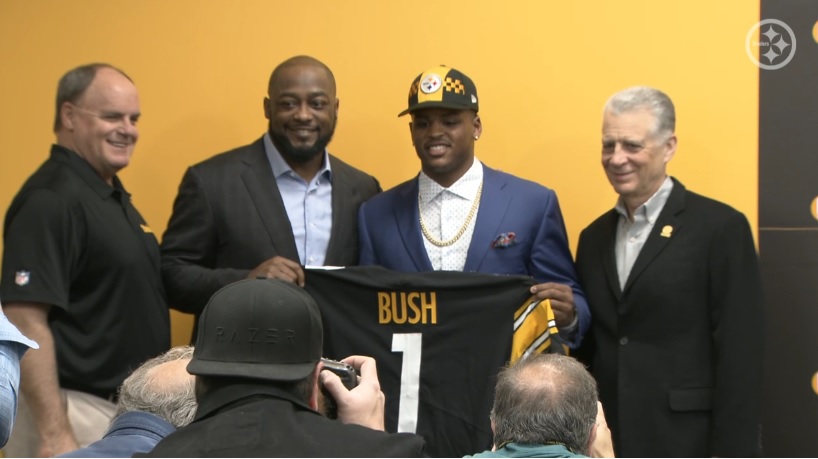 Entering the fourth season in the NFL for the Pittsburgh Steelers’ 2019 NFL Draft class haul, things have been hit or miss for the players that then-GM Kevin Colbert brought in.

Coming out of the 2019 NFL Draft, there was plenty of reason to be excited for the Steelers’ haul as the black and gold broke convention and traded up into the top 10 to land inside linebacker Devin Bush, who they hoped would put an end to the never-ending carousel at inside linebacker following the tragic injury to Ryan Shazier.

Now, entering the 2022 season, the returns on those picks hasn’t quite lived up to expectations. Names like Smith, Buggs and Gray are no longer with the organization, while Gilbert and Layne haven’t quite developed into anything more than special teams players at this point in their careers.

Snell has been a decent option at running back in a pinch, while Gentry has developed nicely into an intriguing No. 2 tight end overall in recent years. Then there’s Bush and Johnson.

This is one of Diontae Johnson's best plays of his career. The route, the separation, tracking the football, playing through contact, getting a foot and knee inbounds to complete the catch. Elite moment. #Steelers pic.twitter.com/LmjQoc5Q2W

Bush looked like a real find as a rookie, turning in a strong first season in the NFL on an upward trajectory. Then came his torn ACL early in the 2020 season, knocking him out for the rest of the season. In 2021, returning from the knee injury, Bush was disastrous, leading to the Steelers declining his fifth-year option, setting up a make-or-break season in 2022 for the young Steelers’ linebacker.

Johnson has had the biggest return on investment for the Steelers, developing into a legitimate star-caliber receiver, one that is one of the best route runners in the NFL while also handling a significant workload, as far as targets go. He’s struggled with drops throughout his career, though, and is still awaiting a new contract from the Steelers, if it should come at all.

All that, in a way, led to an average 2019 NFL Draft re-grade of an average “C” from Bleacher Report’s Maurice Moton Thursday. That’s not surprising overall. A lot of it hinges on the decline of Bush, and the lack of interest in extending a guy like Johnson to this point, according to Moton.

“The Pittsburgh Steelers added players who produced right out of college, but they seem hesitant to commit to their top picks for the long term. Devin Bush has trended in the wrong direction after getting a couple of votes for Defensive Rookie of the Year,” Moton writes regarding the Steelers’ 2019 NFL Draft class. “In 2020, he missed 11 games. Last season, quarterbacks targeted him, and the 5’11”, 234-pound linebacker allowed his worst single-season marks in coverage with a 70.2 percent completion rate and a 102.8 passer rating. The Steelers declined to pick up the fifth-year option in his deal.

“Diontae Johnson wants to stay in Pittsburgh for the long term, per ESPN’s Jeremy Fowler. The Steelers may want to see him build on a 2021 Pro Bowl campaign before they open the checkbook for him in a contract year. Justin Layne hasn’t been able to carve out a lead role. He’s served as a backup for all of his 43 appearances. Meanwhile, Benny Snell Jr. has seen a drop-off in his rushing production with a limited workload. In 2021, he recorded just 36 carries for 98 yards. Barring a turnaround for Bush and a long-term contract for Johnson, this class looks mediocre in hindsight.”

With hindsight being 20/20, it certainly does look like a mediocre class overall, one that would likely rank middle of the pack from the Hall of Fame career of Colbert’s as the GM and Director of Football Operations for the Steelers from 2000 through the 2022 NFL Draft.

Make no mistake, Colbert has had some dud classes. I wouldn’t call this one a dud overall, considering when healthy Bush is a solid linebacker (2021 not withstanding) and Johnson is a high-level receiver. Getting sound special teams players in Layne, Snell and Gilbert is good overall, but the Steelers expected more out of at least Layne and Snell, but they haven’t quite seen that yet.

The misses on Smith and Gray don’t hurt as much overall, considering they were Day 3 picks. What does hurt is that Smith didn’t even make it through training camp with the Steelers, getting cut on August 31, 2019 before landing with the Jaguars in October of that year. He eventually circled back with the Steelers for a few weeks, but was then ultimately released again. He’s currently a fullback with the Raiders.

If the Steelers didn’t move up to 10 overall for Bush, maybe this draft looks a bit different, especially with a second-round pick to prop it up. If Bush doesn’t get hurt, he’s probably still trending upwards as a dynamic linebacker. Ifs don’t count though, especially in professional sports. It’s a mediocre class overall, and could look much, much worse if Johnson leaves in free agency and Bush flops again in 2022.