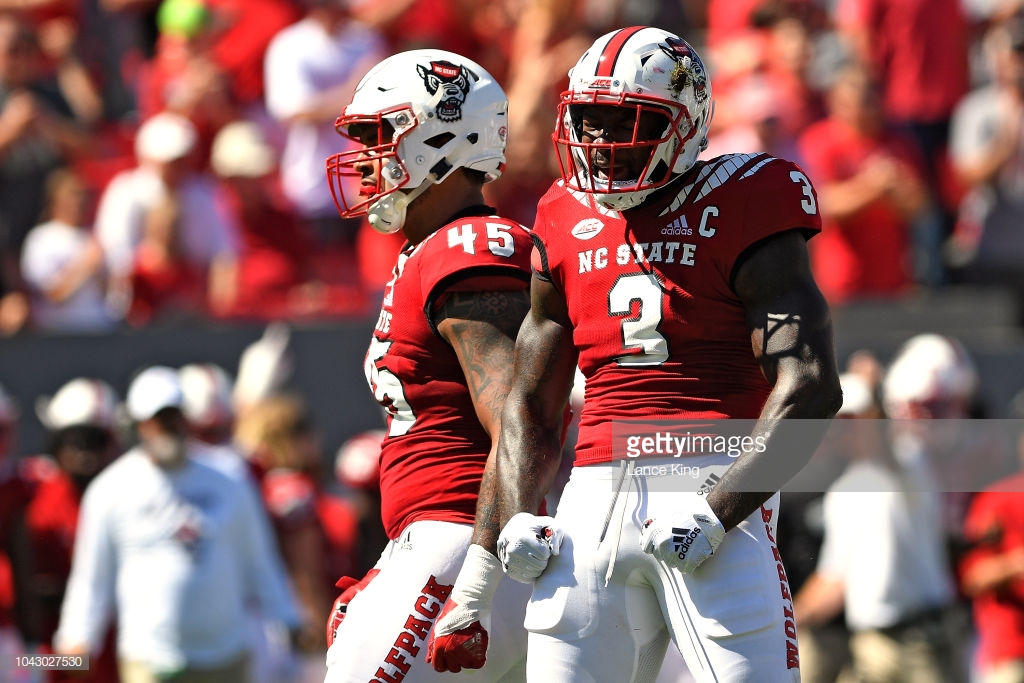 -Sudden lower half that allows him to move quickly directionally
-Explosive first-step quickness coming downhill
-Strong, violent upper body as a tackler
-Comfortable playing in space;
-Understands drop depth in zone coverage, and has shown the ability to film hips and run down up the seam in coverage
-Consistently around the football; tackling machine
-Versatile defender that can fill a number of roles

-Slow to read keys and process what is happening in front of him
-Can be distracted with eye candy from offense, putting him out of position or a step too slow to read action
-Doesn’t trust his eyes completely once he processes
-Needs to develop hand usage to keep blockers off of him
-Can take himself out of plays by guessing which hole to fill
-Doesn’t offer much juice as a pure pass rusher unless given a runway as a blitzer
-High pad level, which leads to big target for blockers

-Finished four-year career at N.C. State with 235 tackles, 17.0 tackles for loss, 6.0 sacks, 4 interceptions, 9 passes defended, 3 fumble recoveries and 3 forced fumbles
-Originally recruited to N.C. State as a safety and played first two seasons with Wolf Pack in defensive secondary before switching to linebacker during 2016 redshirt season
-Finished second in tackles in ACC during 2018 season with 104 stops
-Started just one season at N.C. State, his senior season. Rotated in during 2017 season at linebacker and finished as fourth-leading tackler for Wolf Pack.

Every now and then throughout the draft process, a player will pop up following the season that you never really heard of. Once that player pops up and you get your eyes on him, chances are they’re going to impress.

That holds true with North Carolina State redshirt senior linebacker Germaine Pratt, who made the switch from safety to linebacker during his redshirt 2016 season, before then blossoming into one of the top tacklers in the Atlantic Coast Conference his final season with the Wolf Pack.

At a well-built 6-foot-3, 240 pounds, Pratt looks the part of today’s ideal linebacker in the NFL. He’s tall enough, very strong for the position, has a ton of range, and has the athleticism to play the position at the next level.

But as a guy playing linebacker for just his second full season, he still looks very raw for the position despite the productivity.

When watching Pratt at N.C. State, you’ll see how hesitant he is once the ball is snapped. That’s because he’s still new to the position – last season was his first season as a starter – and is still trying to pick up how to quickly read his keys and process the action in front of him. Couple that with a high pad level that leads to a big target for blockers and it can be hard for Pratt to make plays consistently.

Here you can see he struggles to diagnose what is happening in front of him along the offensive line, which leads to him raising his pad level to try and see into the backfield, rather than reading the linemen.

Once that happens and he realizes what’s coming, he tries to slip under the block, but that completely takes him out of the play, leading to a gaping hole on the left side of the N.C. State defense and a big run on the read option by the Tar Heels’ quarterback.

Clemson really took advantage of Pratt’s struggles to read his keys and ignore the eye candy by the offense in 2018, repeatedly catching him with the jet motion from Amari Rodgers, allowing offensive linemen to climb to him at the second level.

On the goal line, Pratt was caught watching the jet motion and didn’t pay attention to the uncovered tackle in front of him, resulting in the Clemson tackle reaching him and erasing him before Travis Etienne crossed the goal line for the touchdown.

I have full faith that this can be coached out of him at the next level, but it’s certainly a concern on tape leading up to draft day.

What really stands out with Pratt is his lateral movement and range for the position. As a former safety that added some weight and muscle, he still moves really well sideline to sideline to make stops.

Against North Carolina in 2017, Pratt was all over the field, both when lined up, and making plays.

Once the ball is snapped here, you can see Pratt start to drop into coverage. However, once he sees the quick swing pass to the North Carolina running back, watch the closing speed from the middle of the field to the far sideline for the tackle. That’s rangey stuff right there.

I mentioned how strong and violent he is as a tackler. He’s not a big hitter by any means, but as soon as he gets his hands on you and his arms around you, you’re getting slung to the turf hard.

You can see he’s a bit slow to read this play here as well, but watch what happens when the Syracuse running back hits Pratt in the hole. It’s almost as if he hit a brick wall going full speed. There’s no give from Pratt, and once the initial contact is made, Pratt wins easily, slamming the back to the ground.

These types of plays litter Pratt’s tape, and it gets you excited watching him, simply because he’s so raw, yet so productive and such a sound tackler. He’s a lot like Colts rookie linebacker Darius Leonard was coming out of South Carolina State.

Like I said earlier, he’s still raw for the position, but he’s constantly around the football, rarely misses tackles, and is versatile enough to line up all over the field for a defense at the next level. He’s right in the mold of the new-age linebacker, and could have a big impact right away.