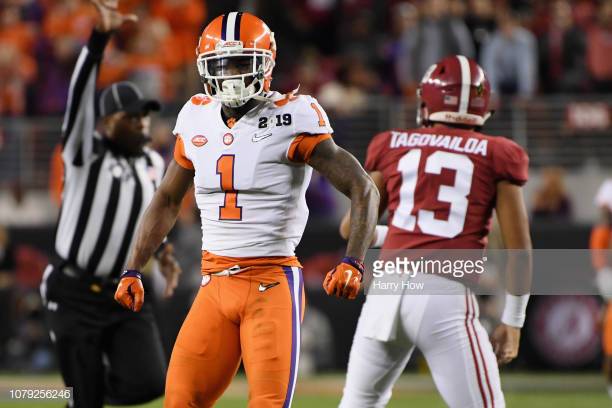 – NFL frame, room to grow into, but looks the part
– Physical in press man, his best trait, with a strong punch and ability to stun receivers off the line
– Uses length to make plays in coverage, can contest the catch point
– Willing and good enough tackler against the run and in space
– Experience playing both sides, field/boundary, and even saw some work in the slot
– Shows ability to recover and get back in phase, takes good angles, and has some veteran “tricks,” shows a speed turn off the line
– Played in a variety of coverages and alignments on a good defense with a great coach
– NFL bloodlines

– Too tall in his pedal and shows stiffness when transitioning in off man/zone, vulnerable to giving up a step over the top
– Clunky footwork when threatened vertically, struggles to stay in a line and will begin to open his shoulders, makes it harder for him to smoothly turn
– Not an incredibly physical player as a tackler
– Straight line speed is average, likely won’t test super well
– Is probably scheme specific, tailored to a Cover 1/Cover 2 heavy team with their corners rolled up
– Average starting experience
– Statistically, poor production

You can compare Mullen to the player I recently profiled, Penn State’s Amani Oruwariye, in a lot of different ways. Tall corners with length capable of making plays in coverage. Mullen is a little more scheme specific in his projection. This is a guy you definitely want closer to the line of scrimmage for the positive traits he shows there and some of the negative ones he has when you play him off the ball.

He’s not afraid to get in a receiver’s face. In fact, he thrives on it.

Even when he played off, he still wanted to get in someone’s grill. Aggressive move but he read the route and bumped the receiver off his break. Watch Mullen at the bottom of the GIF.

But I definitely worry about him as a space player. Don’t think he’s a great athlete and you certainly see some tightness in his hips. Footwork isn’t helping him either, though that can be cleaned up and improve his projection.

I like Oruwariye more than I do Mullen. Feels a little more athletic, better playmaker, though Mullen is definitely a better tackler. Both guys figure to be in that “second tier” of corners behind the likes of Greedy Williams and Byron Murphy and do fit what the Steelers are looking for. Given that Mullen is a Power 5 underclassmen, I figure his name will be in the mix, though right now, I don’t think I’d love the pick. Gives me a Trae Waynes feel but again, won’t test as well.