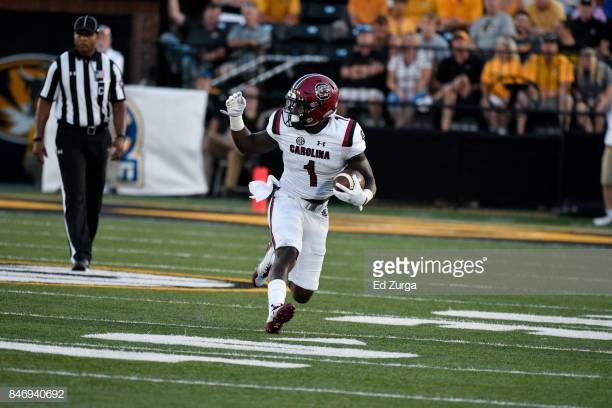 – Excellent speed in the open field, coupled by elite acceleration that allows him to get up to top speed almost immediately
– Burst at his break point as a route runner, sets up corners with head/body fakes and creates space at the top, especially on in-breaking routes
– Wins in the red zone with his ability to create space, makes up for a lack of size
– Versatile player and dynamic in a variety of ways, a true gamebreaker who consistently made big plays and found the end zone
– Tough player, gives top effort, and harder to bring down than you’d might expect
– Times his jump well on vertical throws and shows ability to high point the football
– Quick to the tuck after the catch, gets upfield and back to speed after the catch
– Willing blocker who will sacrifice his body
– Big-time threat in the kick return game, team found tons of ways to get the ball in his hands (receiving, running, returning)
– Despite average frame, big hands (10 1/8 inches, largest of any WR at Senior Bowl)

– Average frame and build
– Will struggle to consistently make catches outside his frame, limited catch radius
– Can get pinned to sideline and swallowed up by bigger DBs in press coverage on outside releases
– Limited productivity, in part due to injuries
– Injury history, medical red flags, early history of soft tissue injuries

Explosive. Dynamic. Playmaker. You want to find a guy who fits all those adjectives? Deebo Samuel is your dude. Production doesn’t mean everything but it’s hard to ignore with him. When the ball was in his hands, he was finding the end zone. That’s one of those intangibles scouts and coaches love. Randy Fichtner has talked about it. They want guys with a knack for the end zone.

Samuels showed that speed as a receiver…

He won in the red zone too on in-breaking/slant routes too. So he can produce for you even without being the biggest dude around the goal line. Love how he beat press coverage in the first clip.

The guy even throws his body around as a blocker. It’s easy to see why teammates hold him in such high regard, twice named MVP, basically for the two seasons he was mostly or fully healthy.

There are some obvious size concerns, but let’s make it clear, the dude is nearly six foot. It’s that $1.99 vs $2.00 psychological difference. He’s not tiny. And he can struggle to catch outside his frame if the ball isn’t thrown right on target. One of the biggest concerns are the injuries, especially his early history of soft tissue (hamstring) problems. That stuff can derail a career but it’s a positive sign those injuries seem behind him and he’s taken better care of his body.

But I’m a big fan of this guy. Productive career, one of the best players – not just receivers – at the Senior Bowl, and he has the makings of an impact player. If you’re looking for that “X” receiver to replace Antonio Brown, should it come to that, Samuel is a good place to start.

Games Watched: vs NC State (2017), at Vanderbilt, vs Missouri, at Clemson, Senior Bowl