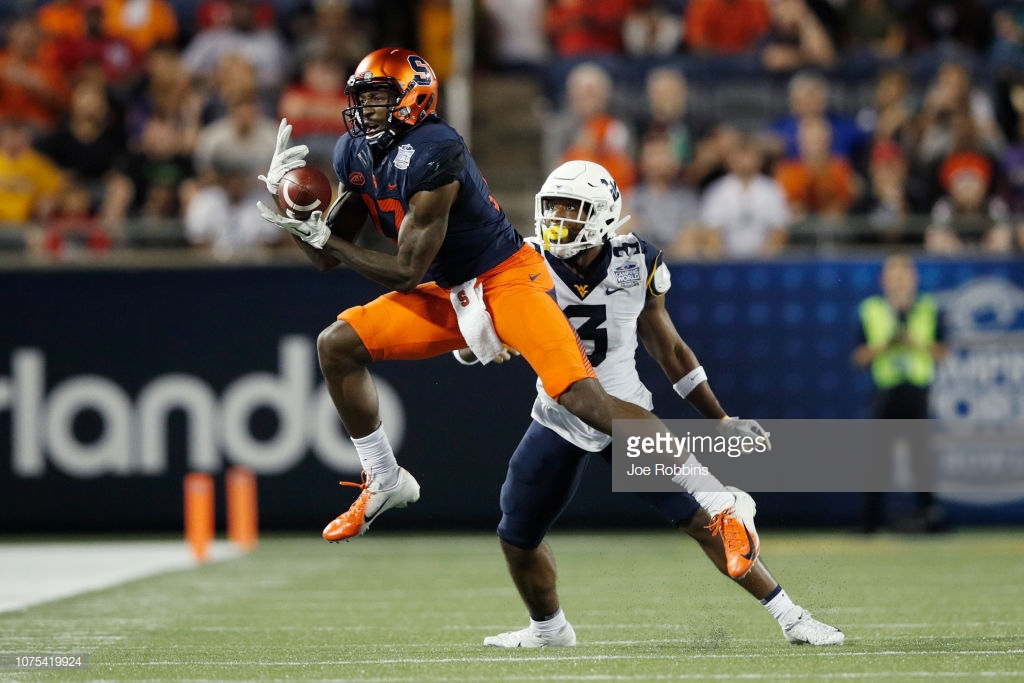 -Long strider that gets on top of defenders in a hurry
-Makes terrific adjustments to the ball in the air and times adjustments late so as to not tip off defenders
-Huge catch radius with soft hands
-True home run threat that is comfortable operating out of slot or boundary
-Adept special teams player; served as Syracuse’s gunner on punts throughout time with Orange
-Physical route runner that consistently creates separation with force

-Limited route tree while at Syracuse
-Lacks consistent effort as a blocker
-Doesn’t offer much after the catch in terms of creativity or splash YAC
-Tends to body catch the football quite a bit; needs to learn to consistently highpoint the football with his size
-No suddenness or acceleration to his game on underneath routes
-Misses spots down the field on go routes, forcing quarterbacks to hold the football and adjust on the fly

-Finished four-year career at Syracuse with 64 catches for 1,048 yards and 8 touchdowns
-Huge senior season saw him haul in 51 balls for 906 yards and 6 touchdowns, averaging nearly 18 yards per catch
-Appeared in 27 career games at Syracuse, starting 15, including all 13 in senior season
-Redshirted in 2016 due to high ankle sprain after three games
-Earned an invite to East-West Shrine Game after huge senior season

If you’re a general manager searching for a true home run threat in the 2019 class at wide receiver, look no further than Syracuse’s Jamal Custis.

I think I’ve identified the big, tall, fast WR I want the #Steelers to target in the middle rounds. Know it’s super early in the process, but I keep coming back to Jamal Custis out of Syracuse. 6’5”, 224, said at Shrine Week he’ll likely run a 4.4.

While a starter for just one season at Syracuse, Custis broke out in a big way as a senior, showcasing his ability to be a home run threat in Syracuse’s “Orange Is The New Fast” offense under head coach Dino Babers.

As the deep threat for the Orange, Custis had a limited route tree at Syracuse that consisted of go’s, fades, and comebacks. Rarely did he work underneath at Syracuse, which has created some questions about his overall game.

However, despite being a known deep threat, he consistently got deep on deeps, whether that was on the boundary, or running out of the slot.

There’s nothing fancy to his go routes. He works through contact really well and is crafty enough to get away with a bit of offensive pass interference more often than not, allowing him to utilize his physicality to create separation.

When running deep routes, Custis really tracks the football well. He reminds me a lot of current Dallas Cowboys rookie wide receiver Michael Gallup, who I profiled for Steelers Depot last spring. Custis has a knack for tracking the football when it’s in the air, and does a nice job of making adjustments on the ball in the air without losing speed.

Here against Pitt at Heinz Field last season, look at the way Custis works down the far sideline and tracks this football over his shoulder, getting a foot inbounds with possession for the catch. The senior receiver made these types of catches look routine throughout his final year at Syracuse.

As a blocker, Custis leaves a lot to be desired. He can stalk block when it’s schemed into the play for him, but he won’t go out of his way to lay a block in the run game.

When I say schemed into the play, this is what I’m talking about. This is a simple bubble screen to Sean Riley against North Carolina State at home late in the season. With Custis’s size and strength, he’s able to lock up the cornerback here and walk him out of bounds. The play doesn’t go for a big gain, but the block shows what Custis can do when the want-to as a blocker is there.

With such a big frame at 6-feet-5, Custis has a huge catch radius. He tends to body catch the football quite a bit in situations where he shouldn’t, but make no mistake: he has really good hands.

I mean, just look at that grab! That’s spectacular from Custis. To be able to adjust mid-route and throw a big paw out there to snatch the football out of the air like that is some special stuff right there.

The thing that will set Custis apart from a number of other receivers in the 2019 class is his ability to play on special teams. Full disclosure: I covered Custis his first year at Syracuse while I was pursuing my Master’s degree, and was present on Signing Day.

Right away, Custis showed he could play on special teams due to his speed. He primarily saw the field his first few years as a gunner on punt coverage, which helped him hone his ability to beat press coverage as a receiver.

He’ll finish the play off too.

Look at the way he finishes this punt coverage. Sure, it’s not a textbook tackle, but he shows off his reach and his hand strength to rip the returner to the ground deep in his own territory. That will play on Sunday’s right away.

Overall, I am a big believer in Custis’s talents, not only as a special teams player, but as a wide receiver in the number 2 of 3 role in the NFL. He’s a guy who can take the top off of a defense consistently, tracks the football really well in the air, and has a knack for the splash play, which is what most offenses are searching for in today’s game.

With just one year of starting experience, he will need some additional time in the NFL to develop into a complete receiver, but all the tools are there for a guy who is getting severely overlooked in this wide receiver class.