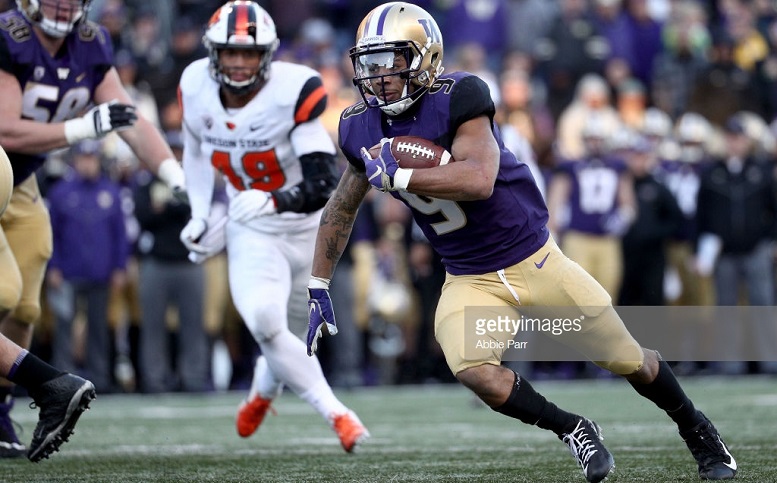 If you’re like me, you’ve been tainted by the recent history of the Steelers drafting smaller players. So let me say this right away. This is not Dri Archer and this is not Chris Rainey.

This has been a public service announcement.

And recent NFL history has shown that smaller players can have success in the leagues. Currently in the NFL you have guys like Darren Sproles, Dion Lewis, Matt Breida, Tarik Cohen and Philip Lindsay who are of similar size.  All have made important contributions their respective offenses.

I have watched a lot of Myles Gaskin over the past few years and there is a lot to like. From the stats above you can see how productive and how durable he has been.  In four years he missed two games to injury (shoulder) while touching the ball over 1,000 times.

He’s a very patient runner and has excellent vision. On zone runs to the inside or outside, he lets the play develop. He doesn’t run to the first sign of daylight but will wait to find the best running lane before accelerating forward. And he’s equally adept running in gap scheme where he can follow pulling OL or hide behind a blocker and cut of his leverage.

To be a good running back there are two things that I feel are extremely important. First, you have to be able to make people miss and be able to create. Every play is not going to be blocked perfectly. There will be defenders in the backfield.  Lateral agility and quickness are paramount and make the difference between getting tackled for a loss and making positive gains.

Against Utah, the DT beats the centers block and gets 2 yards deep in the backfield.  A quick hop right then left before getting downhill for a 7 yard gain

Vs Arizona State, this play is designed to go inside. When that is cut off he uses a jump cut and speed around the edge to get 13 yards.

Secondly, you need to be able break tackles.  Good backs run with good leverage, have good contact balance and finish forward. Gaskin has these and is able to take hits, bounce off and keep moving forward. He is slippery has a knack for avoiding big hits which is crucial when running in between guys who outweigh him by 100+ pounds.

Against Arizona State, the DL beats the TE’s down block and crashes into the middle. Gaskin hits the breaks and then accelerates before the OLB can get a grip on him turning a possible loss into an 8 yard gain.

Against Ohio State, a direct snap was a play Washington used often in short yardage situations and had a lot of success. Here he shows the patience and vision, finds a good gap and runs with good leverage putting a shoulder into the safety at the 3 and finishing forward just short of the goal line.

Receiving skills are also a need with more offenses using the running back in the passing game. Gaskin was not used a lot in the passing game at Washington and what he did run was primarily in the short area. Screens, swing passes and check down routes were bulk of his opportunities but he was used on deeper routes like wheel and corner routes occasionally with success.

Against Rutgers, he’s flanking the QB to the left. Nice play design flooding the left side with 3 receivers and only 2 defenders to cover. He releases around the edge where the LB has to decide to cover him or the TE. He runs a corner route getting behind the LB making a nice catch over the shoulder while showing off sideline awareness to stay in bounds.

Vs Utah, the wheel route against a DE is an easy win for Gaskin. The safety tries to undercut the route. Gaskin shows good hands going up to make the catch and then take it to the house 76 yards.

Pass protection is a vital part of the game for RB’s if they want to be on the field on third down. Gaskin has worked on this part of the game and is showing improvement. On inside rushers he often uses a cut block and shows good timing to execute the block late to make sure he gets his man down. His upper body strength isn’t quite enough to handle outside rushers straight on. So he’s adopted a half man technique where he stays to the inside of the rusher. When the rusher tries to take the outside rushing lane, Gaskin uses leverage to get into his ribs and push him up the arc behind the QB.  His improvement in this area gives us a small glimpse at his work ethic.

Against Arizona State, a good rep doing what I outlined above.

The Steelers may not be in the market for a running back but Gaskin could be a nice addition to James Connor and Jaylen Samuels to form a nice young, affordable nucleus in the backfield. He also could add value on special team. He didn’t have a lot of opportunities in college but excelled as a kick returner in high school.

Projection:  4th or 5th round