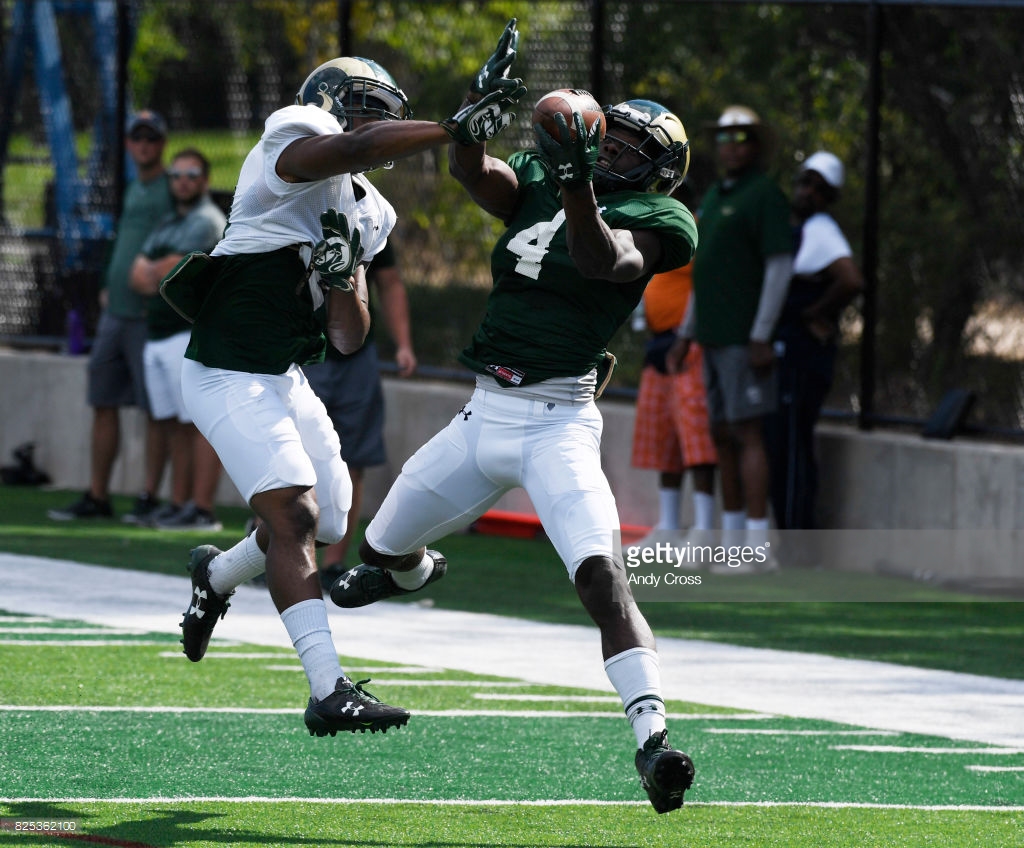 -Tracks the football very well in the air, especially on deep shots
-Physical receiver who excels at catch-point on contested throws
-Underrated run-after-catch player with the ball in his hands
-Good frame for position; has a large catch radius
-Showed improved attention to details as a route runner in senior season
-Explosive lower half as a route runner
-Put up outstanding numbers despite lackluster QB play

Living in beautiful Colorado, I have an up-close look at some high-level college football with the Colorado Buffs and the Colorado State Rams. Thankfully, over the last two years, I’ve had the chance to see wide receiver Michael Gallup up close a handful of times.

As a CSU Ram, Gallup certainly hasn’t received much of the same attention as Alabama’s Calvin Ridley or Texas A&M’s Christian Kirk at the receiver position, but Gallup is every bit as good, possibly even better than some of the top names at the wide receiver position in the draft.

A former star prep player in Georgia who was held out of Division I football for his first two seasons due to SAT scores, Gallup went the junior college route, where he flourished in his first year, before struggling with injuries his second year. The injuries then held him back from receiving the top offers he deserved, which led to him landing with CSU.

While with the Rams under head coach Mike Bobo, Gallup dominated in the spread attack, becoming a physically dominant receiver that Mountain West corners and safeties struggled to stop Gallup, let alone slow him down.

One thing that really separates Gallup from other receivers in this class is his ability to track the football in the air.

Look at the way Gallup tracks this football. Very few receivers do well in these types of throws, but Gallup pulls it in over his shoulder, Willie Mays style. Whew. pic.twitter.com/rX1q6nEwyw

Look at this catch by Gallup against Oregon State in the first week of the 2017 season.

Talk about a Willie Mays-style catch!

He’s really explosive off the line, getting on top of the cornerback quickly, allowing quarterback Nick Stevens to put the ball in the air for Gallup to go and get. It’s not a great throw, but Gallup adjusts well without losing speed, snagging the ball out of the air over his outside shoulder.

Aside from his ability to track the football well, Gallup has great awareness on the field as a route runner. He has a knack for reading what the defense is doing against him, and then finding space in that defense for catches.

Good awareness here by Gallup to push vertically, behind Idaho’s linebackers, into the soft spot in the zone coverage. Touchdown. pic.twitter.com/L0avZANaqd

Against Idaho in the Idaho Potato Bowl at Boise State at the end of the 2016 season, Gallup excelled at finding the soft spots in the Vandals’ zone defense.

As that happens, Gallup, who appears to be running a cross route at the start of the play, readjusts and pushes up the field behind the linebackers into a wide-open area of the defense for the touchdown.

Great hand fighting with Levi Wallace, completely turns him around. Really like the way Gallup positions himself to shield the ball away from Wallace, handing on through contact. pic.twitter.com/wjnOYSyOYh

On the road against Alabama early in the 2017 season, Gallup went up against some of the top cornerback talent in the nation. While Gallup did have five catches for 81 yards against the Crimson Tide in Tuscaloosa, he disappeared in the second half.

However, early in the game, he was locked in and playing very well against some really good corners. In the clip above, Gallup has fast, strong hands against Levi Wallace to knock Wallace’s hands away, turning the Alabama cornerback around, allowing Gallup to break inside for the catch.

Not only is his hand usage strong here, his footwork and ability to make the catch through contact is pretty impressive as well.

I’ve read a few takes where Gallup is afraid to go across the middle. He’s shown flashes of not only being able to do it, but being willing. Again, hangs onto the ball with a big hit coming. pic.twitter.com/kjPnCm5A37

I’ve read a few takes about Gallup that he’s hesitant to go across the middle to make catches, largely because he’s afraid to take a big shot from a safety or linebacker.

I didn’t see that at all on tape, largely because I saw him go across the middle a lot, and he’s a physical runner after the catch, letting me know he’s not worried about contact.

Here against Wyoming during the 2017 season, Gallup, went across the middle, reached behind him to make the catch and took a huge shot from a Wyoming linebacker. Not only does he hang onto the football through not just one shot, but two shots, Gallup showed the ability to go across the middle without fear, endearing him to his teammates.

Personally, I feel that Gallup is a top 3 receiver in this class. Yes, he is still growing as a route runner and tends to coast on routes at times when he’s not getting the ball, but he’s one of the top guys in the country when the ball is in the air.

He needs to work on his run blocking, and he needs to clean up some focus drops, but he’s impressive at tracking the football and has a nose for the end zone with the ball in his hands after the catch.

I’d race to the podium in the middle of the second round to grab him, ahead of guys like Oklahoma State’s James Washington, Florida State’s Auden Tate and Maryland’s D.J. Moore.