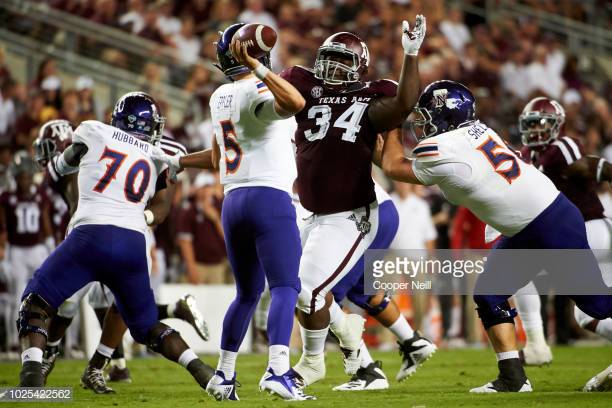 – Prototypical size for a nose tackle, thick lower body and bubble butt that generates the power he plays with
– Strong at the point of attack, tough to move off his spot, even by double-teams, good leg drive
– Lack of height creates built-in leverage against center/guards who are typically a little taller than him
– Proper hand placement on his punch and attacks with a violent strike, does great job hitting first and keeping his hands inside, knows how to stay in control
– Impressive first step relative to his build/position, fires off the ball, creating penetration, walking linemen back, or beating pullers/down blocks to their spot
– Effort player limited in space but tries to chase after the ball, not many loafs
– Productive senior year with more sacks than your usual nose tackle

– Lacks length though not a surprise given his height (32 inch arms)
– Marginal athlete who won’t win in space, squatty body who won’t run many down
– Limited pass rusher who wins with bull/rip, can’t disengage often enough and hand use underdeveloped to shed blocks in the pass game (run game could be improved too)
– Showed improvement from junior to senior season but has to stay on his feet more often, keep his eyes up and not get overextended
– Played throughout his career but only one year experience as full-time starter

Mack certainly looks like an old-school nose tackle with his stocky frame and huge lower half that should carry a “makes wide right turns” bumper sticker on it. His bottom half looks like Javon Hargrave and as Mike Mayock would call it, that’s his “power generator.” Definite bubble butt.

And it shows on tape. He combines that, and this is the key, with a quick first step. Size and brute power is one thing. McCullers has both. What holds him back is a slow get off, in part because he stands so tall out of his stance at 6’6, but at 6’1, Mack doesn’t have that problem. He fires off the ball. Watch him here.

Hand placement is important too. Creates the power on his punch and he wins so often because he’s the first player to engage. Crucial part of the battle.

But I’m not expecting him to be anything more than a power, no-nonsense pass rusher. He struggles with his steps to get vertical and isn’t going to go around anyone pretty much ever. Great look at it during OL/DL in the Senior Bowl. Club move gets the guard off balanced initially but he fails to get vertical with his next step, letting the guard recover and get square again.

The Steelers likely will – or at least should – be interested in adding some d-line depth this offseason. That could come at defensive end but they should also explore nose tackle with Daniel McCullers set to become a free agent and the team desperately needing something better than him in the middle. Said before I think they could address it earlier than the casual fan thinks, as early as Round Three. With Mack, I’m interested if he’s there starting in the fourth. Think he’s quality depth though for what the league demands today, in Pittsburgh, I’m not sure I see him ever becoming a full-time starter. He’d also obviously fit well as a one tech in for any even front and honestly, may even be a better fit there.

Games Watched: vs Alabama (2017), vs Clemson, at Alabama, vs Ole Miss, Senior Bowl