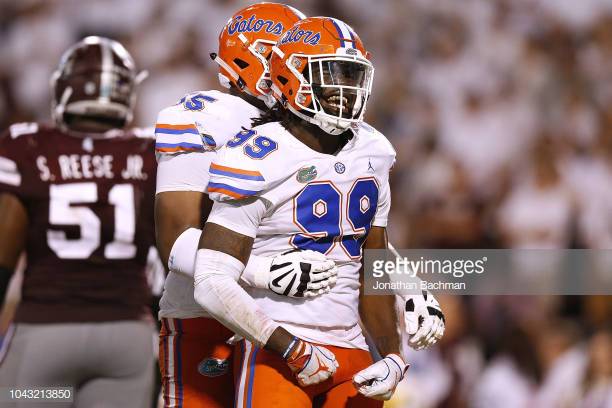 -Lightning-quick get-off that helps him win off the edge.
-Diverse rush plan with a number of counters
-Fast, violent hands to keep himself clean
-Good ankle and hip flexion to be able to get low and bend the edge without losing speed
-Highly productive player at Florida with a great motor
-Has a knack for getting tackles to overset on him due to speed
-Strip sack artist; constantly gets a hand on the football when he’s within reach of the QB

-Can get too focused on winning the edge that he abandons rush lane, opening up scramble lanes
-Slightly undersized for the position and can get swallowed up by bigger blockers
-A tick slow to disengage when defending the run
-Inconsistent at setting the edge when playing the run
-Never really asked to drop into coverage at Florida as a standup defender
-Slight frame that doesn’t have a ton of bulk to it
-Struggles to convert speed to power in rushes; must get stronger at the next level

-Finished three-year career at Florida with 78 total tackles, 28.5 tackles for loss, 15.0 sacks, and four passes defensed for the Gators.
-Recorded a career-high 11.0 sacks in 2018 for Florida
-Former 3-star recruit
-His 11.0 sacks were fifth-best mark in a single-season in Florida’s history
-Named First Team All-SEC and Second Team All-American in 2018
-Forced six fumbles in 2018, tying Clifford Charleton for single-season school record

Coming into the 2018 season, Florida EDGE Jachai Polite was obviously a name to watch in a pass rushing class that appeared very strong on paper. Much like the rest of the upcoming class, Polite lived up to expectations, setting the single-season school record for forced fumbles in a season (6), and recorded the fifth-highest amount of sacks in a single season in Gators history (11.0)

Despite being a bit undersized at 6’2”, 240 pounds (we’ll get official results on Polite at the Combine), the junior EDGE was a monster coming off the corner for a really tough Gators defense under Todd Grantham.

One thing I noticed consistently in Polite’s film was his ability to win off the edge with speed.

Polite uses his stature to his advantage, and has really impressive ankle and hip flexion, allowing him to make his inside shoulder small and dip it close to the ground, letting him slip underneath blockers for a clean rush at the quarterback.

Against Mississippi State, he did this over and over again, harassing Nick Fitzgerald all game long.

When he can’t get home like this, he looks to knock the football out. That’s becoming the next big thing in the NFL because it counts as a sack and still creates a turnover opportunity.

He’s just really good at making himself small without losing any speed or athleticism. He doesn’t look like the biggest or the longest guy on the field, but he has a knack for getting long at the top of his rush and has a nose for the football.

He’s not just a speed rush guy either. He has a great pass rush plan on each snap, and works over his blocker throughout the game, setting him up to win late in games with speed, inside counters, or long arm rushes.

Against LSU in the first clip above, Polite sets the Tigers tackle up for failure by bursting up the field, causing him to overset right away. Once Polite sees that, he hits him with the spin move back inside for a clean, huge hit on Joe Burrow in the pocket, forcing an incompletion.

Later in the season against South Carolina, Polite showed the ability to rush from the opposite side and busted out the long arm rush, stunning the tackle with the straight arm to the chest, knocking him backwards.

After that, Polite shows the ability to once again disrupt the throw, hitting Jake Bentley in the chest and getting an arm on the football, popping the pass into the air for an incompletion.

The only really glaring thing I saw on Polite’s tape was his struggles with big, long tackles if he doesn’t get a clean rush. Against Kentucky early in the 2018 season, the Wildcats started to chip Polite to give their left tackle some help on the edge. That chip threw Polite off of his speed game, which allowed the tackle to set and swallow him up.

Overall, Polite is much more than a pass rush specialist. He played the run well for the most part at Florida, and obviously brings the juice as a pass rusher. What I didn’t see out of Polite at Florida was him dropping into coverage. It will be interesting to see what role he plays in the NFL. I wouldn’t ask him to drop back in coverage at all in the NFL, simply because he’s too productive and effective as a pass rusher.

He plays in a 2-point, but dropped into a 3-point at times, so he’s a fit in pretty much any defense. I expect to see him go in the middle of the first round, but wouldn’t be shocked to see him sneak into the top 10.