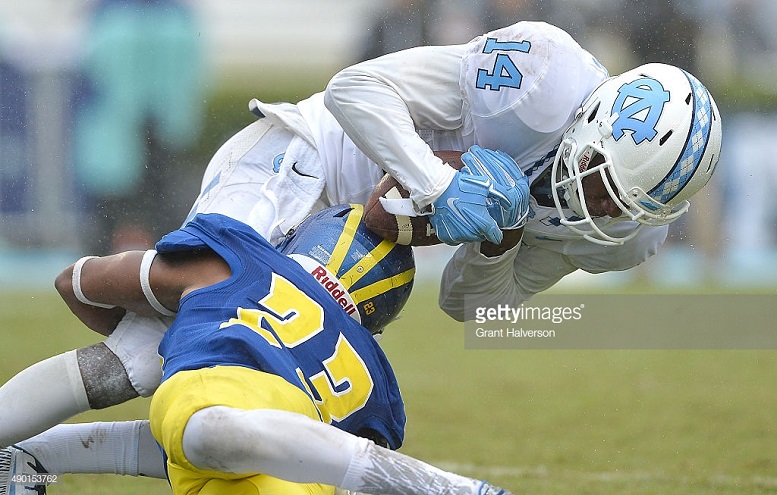 Every year at this time there we start to hear more about the FCS players who could become NFL picks. Names like Darius Leonard and Dallas Goedert from 2018 or Cooper Kupp and Tarik Cohen from 2017. This year is no different and one of those players is Nasir Adderley.

Adderley is a terrific athlete and has the football genes as you can see from the bio above and it shows in his play. He’s a bit undersized but he doesn’t play like it. He’s a very physical player. Whether supporting the run, taking on a block or defending a pass he will back down from no one.  If you were assigned to block him you better take it seriously as well.  He’s not going to wait to be hit, he delivers the hit.

At North Dakota State, WR #80 comes from the outside to block him. He spins off the block and shows his competitive toughness driving the blocker into the pile.

Also at North Dakota State, he’s going to blitz from the slot but it’s a run play. The TE is assigned to block him and Adderley snaps his neck back while setting the edge, closing off the outside running lane.

A four year starter he began his college career playing defensive back and switched to free safety the last two years.

Against the run, he is very active. He shows a willingness to get into the mix and will fill gaps among the big bodies to make tackles. He can play downhill showing his quickness or patience to scrape and react when the RB commits to the hole.

At North Dakota State, he walks up after the offense changes formation. Good mental processing to read the play and race into the backfield to make a tackle for a short gain.

Against Villanova, he’s lined up in the middle of the field in the red zone. He reacts to the run to the left, good speed to close the distance taking a good angle to trip up the runner for no gain.

He consistently flowed to the ball. No matter which side or how far away or how far he had to go to the play was he was always moving that way. He does struggle to follow the ball through the mesh point in the backfield and will fall for the fake.

At North Dakota State, he’s lined up to the left of the screen. He follows the sweep motion to the right and the QB runs right behind him for a TD.

In the passing game, he has experience lining outside from his time as a DB but the pass two seasons he was lined up deep for the most part and occasionally in the box if the situation deemed it necessary. Delaware played a lot of zone defenses with Cover 3 and Cover 4 tendencies but he has the range to play in a Cover 2 or a single high look.  He looks smooth in his back pedal, with loose hips and acceleration to turn and run. He has very good range able to get to the sideline from the middle of the field.

Ball skills are definitely one of his strong points evidence by his 11 career picks and 24 pass breakups. He shows good instincts and reacts well to the ball in the air with speed to close on the defender.  He makes the effort to disrupt the pass playing the ball every chance he gets. There were times, for example crossing routes that were underneath him, that he would take an angle to a go for the ball, rather than the man where if the receiver catches it, he could give up a big play.

Vs Lafayette, outside receiver runs up the seam vs Man coverage. Adderley comes from the middle to go up and high point the ball for the INT in the end zone.

Didn’t get to see him play Man coverage that much in recent years but I don’t see anything that would prevent him, other than size, to play Man in the slot or TE’s.

He’s a very good tackler at the line of scrimmage or in space.  There were several plays were he made tackles where he covered a lot of ground to save the defense from big gains. Occasionally on head on tackles he doesn’t wrap up and will slide of the runner.

Vs Lafayette, lined up inside the slot to the left 10 yards of the ball. Good acceleration to the receiver comes under control and makes the tackle.

Free safety may not be the biggest need for the Steelers but they do need physical playmakers that have ball skills. A guy like Adderley will find his way on the field on defense or special teams.  He has experience returning kicks, covering kicks and being a gunner on punt coverage.