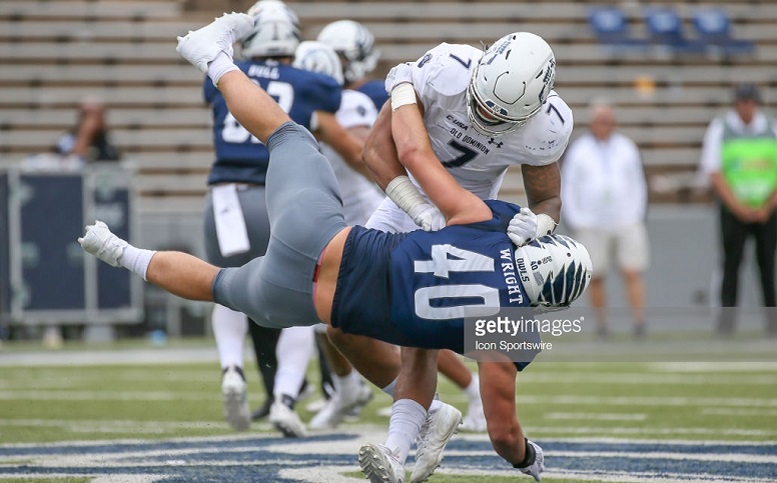 When looking for NFL caliber football players Old Dominion is not one of the places you would normally look. According to Pro Football Reference, then have had zero players drafted. Like ever.

Oshane Ximines put up impressive numbers this year for the Monarchs and along with teammate WR Travis Fulgham, who both became the first from their school play in the Senior Bowl, have a chance to break that streak and become NFL draft pics.

Ximines played primarily as a DE in a four man front. He looked most comfortable rushing with his hand in the dirt but used a 2 point stance more in his senior season. He rushed from both sides as well looking at home on either side.

His best qualities are in the pass rush but they’re not all perfect. His first step at the snap is inconsistent ranging to very good to average. The good news there is in the 5 games I watched he never once jumped offside. If he can refine that first step it would improve his pass rushing ability greatly.

He has very good hands, very active and uses them in a variety of ways against the OL. He likes to knock the blockers hands down or use a cross chop most often to keep hands of him and occasionally he’ll use a forklift move to lift the arms up. He varies his pass rush move to keep the OL off balance using a club, swim, rip and bull rushes. He has a good feel when the OL over sets to the outside and is quick to counter to the inside. And when he can’t get to the QB his always getting his hands up to try to knock down the pass.

At Virginia Tech, lined up at the LDE he starts outside and sees the RT open too far and uses a slap/swim to the inside to get pressure.

Vs Virginia Tech, again at LDE he pulls down the RT to open up and easy route to the QB.

Vs Virginia Tech, he’s standing up in the B gap uses a chop swim to the inside to get quick pressure to force and incomplete pass.

At East Carolina, straight bull rush against the RT uses good hand placement and leverage to drive him back and through the QB for the sack.

Vs Marshall, shows awareness to get the hand up on the WR Screen. Able to tip and intercept.

He’s doesn’t have a great speed rush to the outside and doesn’t bend particularly well around the edge but can get around the edge when he gets off the blocks quickly. But when he doesn’t he can get handled by OL fairly easily on the edge

In some passing situations they would move him inside to rush from the 3 technique against interior OL.

Vs Virginia Tech, from the 3 Tech position pushes the RG arms down and get around him quickly before getting tackled.

Against the run, he shows a willingness to set the edge and prefers to use a long arm to the chest or his inside shoulder into the blocker to keep his outside arm clean. This is okay if he can get enough push to close down the inside gap. I’d rather see him use both hands heads up with the OL to give him a chance to shed the blocker and make tackles.

Vs Virginia Tech, a zone run his way. He shoulders the RT and when the run is forced outside he disengages to make the tackle.

He’s a good tackler and rarely has anyone slip out of his grasp and shows good quickness from the backside making plays going away from him behind the line of scrimmage. He struggles greatly following the ball through the mesh point in the backfield. When the QB is reading him, a good fake in the belly of the back has him chasing the fake allowing big runs behind him. He doesn’t give show great pursuit on  plays on the other side and downfield.

Vs Middle Tennessee State, a good rep chasing down the RB on a run away from him to get the TFL.

Against Virginia Tech, here is an example of him chasing the fake and allowing the run behind him

Coverage could be an issue. He wasn’t asked to do it in the games I watched and other than peeling off his rush to chase a RB on a swing a few times and one 3rd and 19 play when he lined up off the ball that was it. This is something that will have to be determined at the combine and at his pro day.

If the Steelers staff feels he could be used in coverage and transition from the DE to and OLB position he could be in play. Initially, he could be used as a rotational player or sub package rusher until he got comfortable in the position switch. You can never have enough pass rushers and with some improvements Ximines could be an effective one.

Projection:  3rd or 4th round