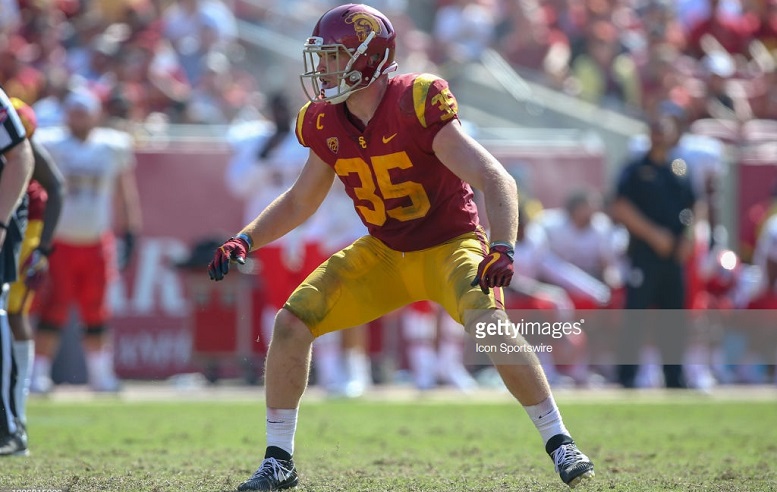 USC linebacker Cameron Smith is a very compelling player. Smith has been thrust into action with kids a lot older than him due to his skill. He has been a starter since his freshman year and according to his USC bio, he was playing football with eighth graders as a fourth grader. Being a four-year starter, especially at inside linebacker is a rare feat in college football and speaks to the intelligence and ability that the USC linebacker possesses.

The senior linebacker is highly intelligent and instinctive. Both skills go hand and hand as Smith not only has a raw feel for where to be but he is also very observant, reading his keys quickly, allowing him to diagnose plays sometimes before they start. That is the exact case on the play above, as the USC linebacker reads the direction of the blockers and is in a good position to make a play on the ball before it has even been handed off.

Instincts, intelligence and heart – Smith has all three. The motor on the USC linebacker is reliable and never fails. Watch Smith chase down this trick play, going from one sideline to the other and then sprinting up field to make the tackle. The heart and hustle to not give up, no matter what, is a winning trait and one that Smith will bring to the team that drafts him.

Just like with all the other linebackers I have profiled, I am looking closely to see how they do in coverage. The ability to stay on the field and not be an obvious weakness in pass coverage is crucial to surviving in today’s NFL. Surprisingly, despite not being the most athletic or raw athlete, Smith shows a good ability to operate in coverage, whether it is in man or zone. On the play above, he is able to carry the Texas tight end down the field and stays glued to his hips. It would have taken a precise and perfect pass to fit a ball in that window.

Looking at USC LB Cameron Smith next. Smith has been a four year starter at USC and shows ability to sit in coverage. Smith had three interceptions in a game during his freshman season. He's an instinctive middle linebacker. pic.twitter.com/jVAKqICPsd

Smith once had three interceptions in a game as a freshman. Each of the interceptions were equally as impressive as they showcase his feel for sitting in a short zone and his instincts for finding a way to the football. On the first interception, Smith sniffs out a slant route and undercuts it. The second interception is the most remarkable of the three, as Smith blitzes but keeps his eyes on the quarterback and running back out of the backfield. As the running back slips up field, Smith follows the quarterback’s eyes and movement and is able to fool the quarterback into making an errant throw. And for the hat trick, the USC linebacker jumps a curl route.

Perhaps his worst showing in recent memory, Smith really struggled out of the gate against Ohio State in 2017. The USC linebacker was constantly fooled by the option and jet sweep handoff. Smith’s overaggressive nature did not help his matter as he shot the wrong gap or found himself trailing behind on most plays. Fortunately, this story has a happy ending as Smith started getting a feel for the game as it progressed, stopping a few runs off tackle before the ball carrier had a chance to get up field.

The only knocks on Smith’s game are his strength as he does get lost in the trenches and his overaggressive nature. Though his highs outweigh his lows, as his instincts, consistent tackling and ability in coverage are home run traits. Smith grades out as mid round pick but with his tools at hand, he does have the ceiling to develop into a spot starter. He should be able to grab a 53-man roster spot in his rookie season as he figures to contribute immediately on special teams