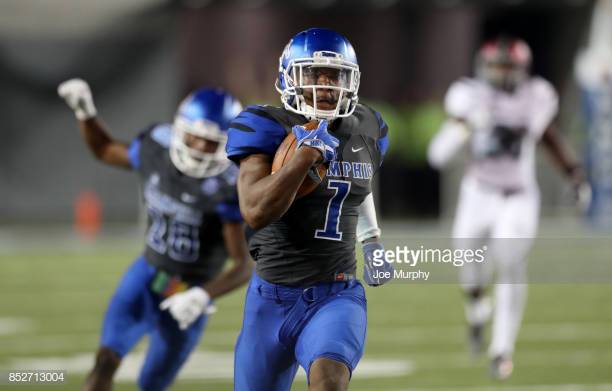 – Good frame, a little lean but seems capable of adding weight and a muscular body type
– Superb long speed and home run player
– Excellent burst and acceleration, able to hit the hole as soon as he sees it
– As a running back, shows vision and ability to press and set up linebackers
– Versatile, played all over Memphis’ offense, used as much as a receiver as he was a runner
– Part of three/five step routes as a receiver, not just quick game/RPO (though used there plenty too)
– Shows moderate power and ability to run through tackles, especially ones too high or too low
– Prolific kick returner, one of the best statistically in NCAA history
– At his best, capable of making tough catches, showing body control and ability to find the football

– Runs too tall and doesn’t fall forward as often as he could/should
– Much more straight-line player than someone capable of changing directions, generally stiff-hipped and takes time/extra steps to breakdown and alter course
– Not a natural receiver, far too many drops and struggles to turn upfield after the reception, gets himself off balance too often, many plays feel difficult and forced, fights the football
– Struggles to create space as a route runner, definitely unrefined
– Questions over NFL role, true position
– Wasn’t trusted to be the lead back or receiver, overshadowed by better talent, and times where gameplan didn’t involve him, simply didn’t touch the ball very often in his college career
– Willing blocker but largely ineffective and didn’t look good in limited look at pass protection, not physical enough

Pollard caught my eye with a pretty good showing at this year’s Senior Bowl so I wanted to check him out more, especially after seeing his interesting career stats, everything he did as a runner, receiver, and especially returner. But I came away more disappointed than I had hoped.

The obvious comparison here is Jaylen Samuels. On that basis alone, you’d think the Steelers could have interest. Pollard is a guy who can run a little, catch a little, and return a lot, just like Samuels (minus the returns). Pollard isn’t quite the same player though. On the positive side, he is much, much faster. He can outrun most guys on the field and his kick return touchdowns are him mostly untouched, making one cut and then burning the 11 guys trying to tackle him. He shows that speed on offense, too.

And he’s made spectacular plays as a receiver too. What a grab against Georgia State this year, working back for the ball and keeping his feet inbounds for the score.

But he’s not a natural receiver. Samuels felt pretty natural. For Pollard, it’s mostly a struggle to catch the ball, secure it, and get upfield. Drops litter his tape.

Even when he does catch it, he can struggle to do so cleanly and that slows him up, sapping his speed and open-field threat. Simple out route but he stumbles and can’t turn upfield, robbing him of what should’ve been an easy first down.

Largely, he’s a straight line-ish runner whose best way of winning is running past, not around or through. Being good at just one thing in the NFL isn’t a recipe for success and his skillset is too limited to think his ceiling is that high. Put on the tape and you’ll be more impressed by the other Tigers’ backs, especially Darrell Henderson Jr, also in the draft this year as a junior. Two backs had more than 200 carries this year for them; Pollard was given just 78.

In their conference championship game, Pollard received just six touches, mostly working as a change up Wildcat quarterback. The other two backs combined for 37 touches. Compare him to Samuels again, who had just one fewer game of double-digit carries but 22 games with at least five receptions; like I said above, Pollard only had four.

Exceptions exist, like Alvin Kamara, but the vast majority of the time, if you aren’t getting the ball in college, you aren’t going to be good enough to get it in the NFL. His value comes as a returner and gadget-ish player on offense who can wear a lot of hats. That is attractive and I don’t want to pretend he’s incapable of making an NFL impact. I think he can, will, and he’s an interesting prospect who should be on most teams radar in some capacity. As a runner, definitely needs to be in a man/gap scheme where he can get downhill and through the hole without changing directions.

But again, that ceiling isn’t super high and that means not investing a high pick into him. You’ll get a good returner. Not sure about everything else. Having kick return value in an era of touchbacks and the game *this* close to outlawing the play hurts him.