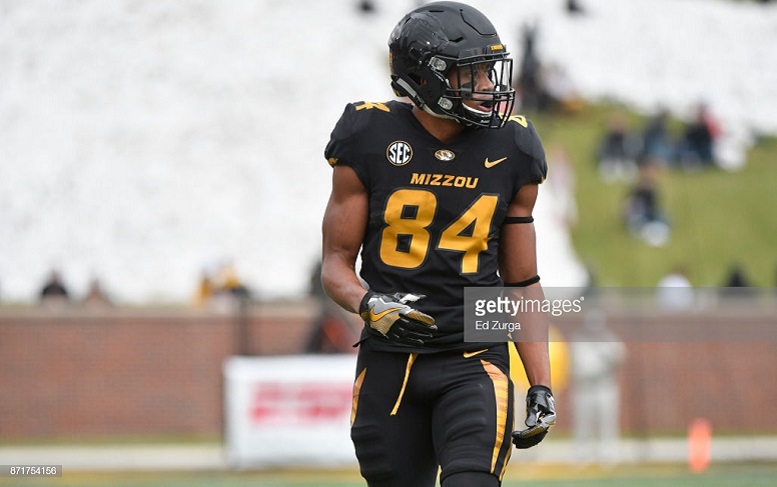 –He has several setup moves to get him off the line of scrimmage.

–Makes tough catches in the middle of the field.

–Explosive athlete who is a deep threat.

–Averaged 20.8 yards per reception at Missouri.

–Good foot speed that can make defenders miss in the open field.

–Tracks the ball well in the air and makes some amazing bucket catches.

–He doesn’t run a lot of routes, perhaps Missouri didn’t ask that of him.

–Not very physical boxing out defenders.

–Had a difficult five weeks in the middle of the season with a groin injury and the passing of his father.

–Can be lazy when the ball is not going to him.

–Finished his collegiate career with 97 receptions for 2,016 yards and 16 touchdowns playing all four years albeit limited in his first two years.

–Opted out of Senior Bowl due to the flaring up of groin injury that happened in middle of the season.

–Started senior year with two back to back 170+ yard games.

Split out wide to the left on a 3rd and 10, Hall lines on the line of scrimmage with the cornerback directly across from him with no cushion. At the snap, the receiver dips outside, slips past contect, and streaks down the sideline creating separation from the defender. He maintains his stride while tracking the ball over his shoulder. Hall slowly gets his arms up to secure the catch, and gets brought down by a diving tackle while falling forward.

Once again, he is split out on the far left on a 3rd and goal at the five yard line. The wideout is given a 4 yard cushion by his defender. At the snap, Hall runs directly at the corner which forces him back on his heels. This allows the receiver to create separation inside. Drew Lock’s pass is a little behind the wideout, but Hall calmly reaches back shielding the defensive back from the ball to catch the touchdown.

Split out far left with a five yard cushion on a first and ten at the Missouri 32, Hall forces the corner back a step at the snap of the pigskin. Then he darts directly down the line of scrimmage catching the ball cleanly in space. His defender screams towards the playmaker, while Hall jukes the defensive back to the ground. The wideout darts outside like a slalom skier, starting and stopping for a 16 yard gain that could have gone for only a yard if not for Hall’s quick feet and vision.

On a 2nd down and 4 with a 13 yard cushion that became a 7 yard cushion at the snap, Hall just takes a step forward and stops at the snap of the ball when he realizes the pass is intended for the slot receiver to his right. He doesn’t try to block anyone and just watches while the ball gets stripped away from his teammate. Hall’s effort on that play was very disappointing.

Projection: Third or fourth round selection