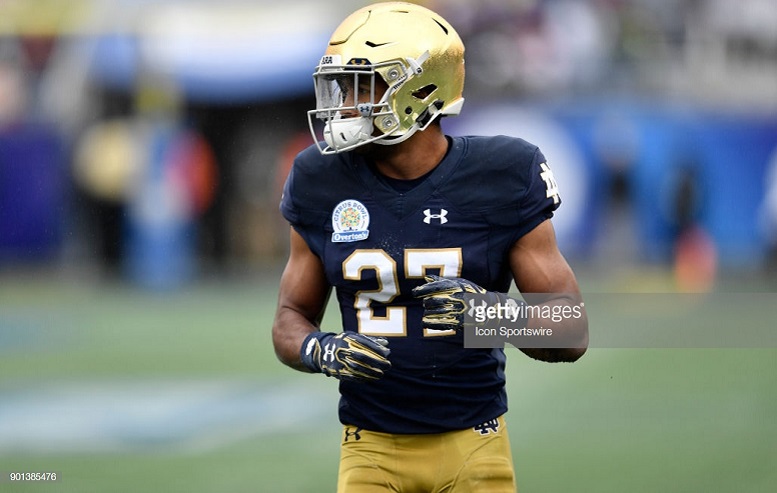 On defense you can never have too many pass rushers and you can never have too many good defensive backs. The two positions go hand in hand and complement each other greatly. Having a good pass rush can help cover a deficiency in coverage and conversely having better defensive backs can aid a defense when the pass rush isn’t doing its job.  The Steelers tied for the league lead in sacks with 52 and were 28th in interceptions with 8 with 5 of those coming from DB’s.

Julian Love brings a lot of experience to the table. The junior from Notre Dame started 34 games over the last three years and had 5 career interceptions. That stat that really stands out is his pass break ups. 39 total in his career including a school record 20 as a sophomore and 16 this past season.

He played the boundary corner for the Irish which is generally considered the more challenging side because they usually don’t get as much help from the safeties. On obvious passing downs, when opponents would go 4 wide, he would often move inside and play the slot. He has experience playing off the ball, zone and press man coverage.

Vs Syracuse, he’s in the slot and the WR gets a step on him. He stays with the play that is looking like a catch but he chops at the ball and forces the incompletion.

With the NFL being more about the quick passing, high completion percentage game the majority of that came comes within 10 yards of the line of scrimmage. He’s at his best when playing off the ball where he can read the WR and QB and break on the ball. Really like his ability to put his foot in the ground and accelerate downhill to make a play on the ball. On deeper routes he uses his hands well to redirect and disrupt routes.

Vs Virginia Tech in off man coverage, jumps the comeback route and under cuts it for the INT.

Vs Syracuse, in Zone coverage he reads the swing to the running back and comes up to make a clean tackle for a loss.

His Man coverage skills are solid and he’s generally in phase. He’s patient to wait for the WR to make his cut, has smooth hips and gets up to speed quickly to run with the WR. He doesn’t look overly fast but doesn’t look to have issues running with WR’s on deeper routes.

Vs Syracuse, just a go route where he uses his right hand to get a little push on the WR and gets in good  position to use his body to force him toward the sideline.

He’s comfortable playing in trail man coverage and reads the reaction of the WR well to get his hands inside the receiver’s arms to break up passes.

Vs Vanderbilt, press coverage where he gets a good jam at the line of scrimmage pushing the WR toward the sideline. He doesn’t get his head around but reacts to the WR to break up the pass.

Vs Stanford’s JJ Arcega-Whiteside (#19)in the red zone. He’s in good position, uses his hands well and gets his head back around to the ball. Gets his hand up between the WR’s to make it a difficult catch.

He is susceptible to falling for the double move. Because he plays downhill so well, when he sees the receivers first cut he is quick to attack it and when that second move comes it leaves him in a disadvantageous position.

Vs NC State’s Stephen Louis (#12) he jumps the out fake allowing Louis to make the inside cut for and easy catch. The Steelers actually used this route several times last year for big gains.

Vs Vanderbilt, this time it’s an inside fake and a break to the outside that gets him twisted around and he misses the tackle. This was a bad rep but there weren’t many of these.

He isn’t overly aggressive in the run game. He will get in there to make tackles and is willing to take on lineman when he’s the last man on the outside of the defense to force the run back inside.  His tackling is good and will find a way to get his man down.

Vs Northwestern, he has the unenviable task to take on the pulling OL. He meets him at the line of scrimmage to force the run inside and eventually disengages to makes the tackle.

Vs Virginia Tech, he’s in zone coverage and reacts to the quarterback scrambling. He’s ready to pop the QB when the ball comes out and he benefits from a nice bounce to get the fumble recovery TD.

I think Love fits today’s game very well. The majority of the passing game is in the short and intermediate area where his strengths lie. He doesn’t have great size but is similar in size to Joe Haden.  Defensive back is a definite need for the Steelers and something that should be addressed within the first couple rounds on draft day. I think this golden domer would look very nice in black and gold.