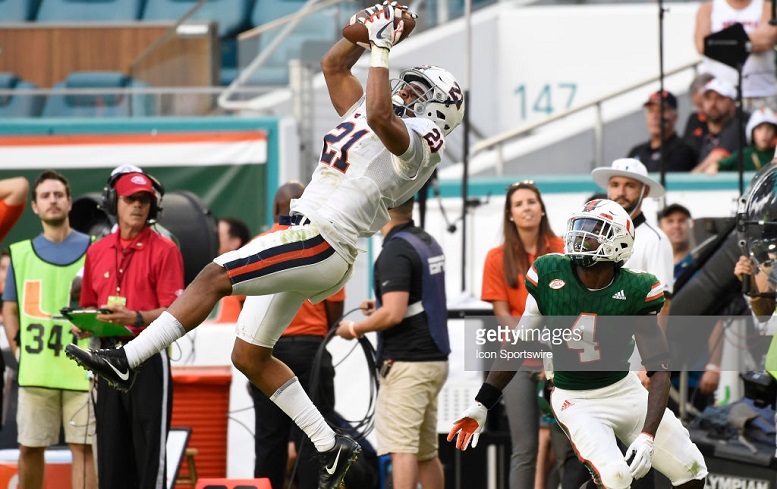 Virginia safety Juan Thornhill is a jack of all trades. The senior safety has experience as a cornerback, in the box safety and deep safety. Thornhill made the transition from cornerback to full time safety for his senior season and the results have been rewarding. The safety finished with 98 tackles and six interceptions, which were the third most interceptions in the nation. A great processor, Thornhill comes equipped with cornerback athleticism along with safety smarts.

With his cornerback experience, Thornhill can easily diagnose routes and breaks from receivers, except now he can roam from above and undercut any throw. The Virginia safety makes the opposing quarterback pay for locking onto his target and undercuts a throw to the sideline. He is also a threat to flip the field anytime he has the ball in his hand as he recorded 141 interceptions yards this season, a Virginia record.

While Thornhill may not have had the athleticism or footwork to be an elite cornerback, his athleticism is top notch for the safety position. He has loose hips and can open up without any hitches in his movement. While the Miami receiver is able to open up and flip Thornhill’s hips, he is still in excellent position as he does not get beat deep. This is key as it shows that he can be used as the defense’s last line of defense in a center field role.

Thornhill also comes equipped with the ball skills of a cornerback. The play above is like watching a movie play out in sequence. There is the initial heartbreak where Thornhill bites on the double move and impending doom feels like it is inevitable. Then there is the heroic redemption moment where the safety showcases quick recovery skills with his loose hips. Finally, there is the closing scene, a diving acrobatic interception that sends everyone home happy. You want your safeties to be ball magnets and Thornhill definitely has the ball skills and instincts to consistently find ways to the football.

The NFL team that adds Thornhill is not just getting a high upside safety but also a safety that can be used in a variety of ways. Here he is man to man coverage in the slot and he is able to stay with his man for almost five seconds. Thornhill closes the play just falling short of another interception but displays another example of his athleticism and ball skills.

The biggest question surrounding Thornhill’s full-time transition to safety was how he would hold up against the run. The answer to that is pretty well. The Virginia safety rose to the task at hand and showed the ability to not only come down from the secondary to make run stops but also to play as an in the box safety. He gets downhill quickly and is frequently involved in the play, recording 98 tackles this season.

There is not much to dislike about Thornhill’s game as he blew past his expectations in his first year as a full-time safety. While the Virginia safety is never going to convince anyone that he is the fastest or quickest player on the field, he makes up for it with intelligence, instincts and versatility. The ability to not only add a promising safety but also a safety who is capable of playing in the slot and being a proven run defender is a commodity that NFL teams are going to jump the gun to add. It is hard to imagine Thornhill going any later than day two, with a chance to perhaps even be a second-round selection.

For a team like the Steelers who may be in the safety market again if they release Morgan Burnett, Thornhill would be a pretty good replacement at the dime backer position.