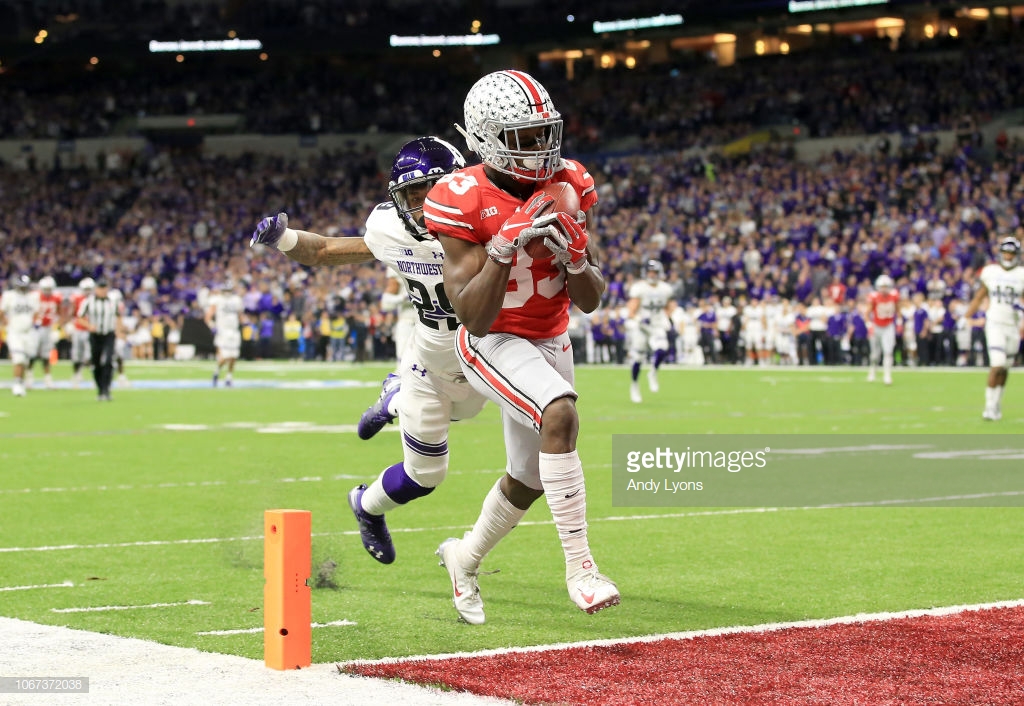 -Willing blocker that loves to stick his face into the fan on crack blocks from outside
-Gets up to top speed in a hurry in his routes
-Dynamic game-breaking ability after the catch
-Quick, lite feet in short area of his game
-Consistently gets clean releases off the line and changes up his technique throughout the game to keep corners guessing
-Legitimate deep threat that routinely takes the top off of defenses
-Experienced special teams player; served as a gunner on punt coverage, helping him hone his press release abilities

-Finished career at Ohio State with 75 catches for 1,251 yards and 19 touchdowns, averaging 16.7 yards per catch in 44 career games
-Best season was senior season in which he hauled in 35 passes for 701 yards and 11 touchdowns, finishing with 20.0 yards per catch
-Invited to 2019 Senior Bowl, where he exceled in front of scouts
-Two-time captain in 2017 and 2018 at Ohio State and graduated with communications degree in 3.5 years

If there’s a surefire player in this draft class who will be light years better in the NFL than he was in college, it’s easily Ohio State wide receiver Terry McLaurin.

Caught up in a numbers crunch in a deep, talented Buckeyes wide receivers room, McLaurin produced just 75 career catches in 43 career games, but he did haul in 19 touchdowns as a legitimate deep threat for Ohio State.

The problem with his skill set as a home run guy was the lack of deep throwing in Ohio State’s offense under JT Barrett and Dwayne Haskins in recent seasons. Fortunately for McLaurin, he’s an elite run-after-catch guy in this class, thanks to his game-breaking speed.

Catching a short curl here against Oregon State to open the 2018 season, McLaurin shows off his open-field vision and impressive acceleration, getting up to top speed quickly, allowing him to run away from the Beavers’ secondary for the 74-yard score.

One thing I’m really high on with McLaurin is his footwork in short areas. Yes, he takes a false step on his release off the line more often than not, but he’s got quick feet in a phone booth and relies on his footwork to work himself open.

This is a simple stop route for a short gain, but watch the feet at the start of the play, and once he gets to the top of his stem.

He’s a sudden player in his movement and really bounces around on his feet. He’s able to get a quick, clean release off the line and then stops on a dime, allowing the corner to blow by, getting himself open on the stop route.

His calling card though is his home run speed.

This is from 2017 against Wisconsin in the Big Ten Championship Game. He’s working out of the slot against the Badgers and gets a clean release. That’s the first mistake. After that, he’s able to use his long speed to flat-out run away from the defender for the 84-yard touchdown. It won’t always be this easy in the NFL, but if he lands in the right offense that likes to take deep shots, he’s going to put up quite a bit of production.

I know I said he’s not very physical in his routes and rarely wins contested catches, but that’s not to say he hasn’t done it. In fact, he’s flashed the ability a few times on tape. He just needs the right coaching to consistently bring it out of him.

Again, look at the suddenness in his lower body to get him free off the line and outside of the defender, getting himself even quickly. Once that happens, the quarterback gives him a shot on the fade. He ends up trapping this against his chest, but you can see the leaping ability.

He needs to learn how to high-point the football in situations like this to be able to consistently give himself a chance to win at the next level.

Outside of his receiving abilities, McLaurin will contribute from Day 1 in the NFL as a special teams player. He was tremendous as a gunner for Ohio State during his four years, routinely getting downfield quickly on punt coverages.

Despite not producing a ton as a receiver over 43 games at Ohio State, McLaurin is as talented as they come in the 2019 wide receiver class and should hear his name called early on Day 2.