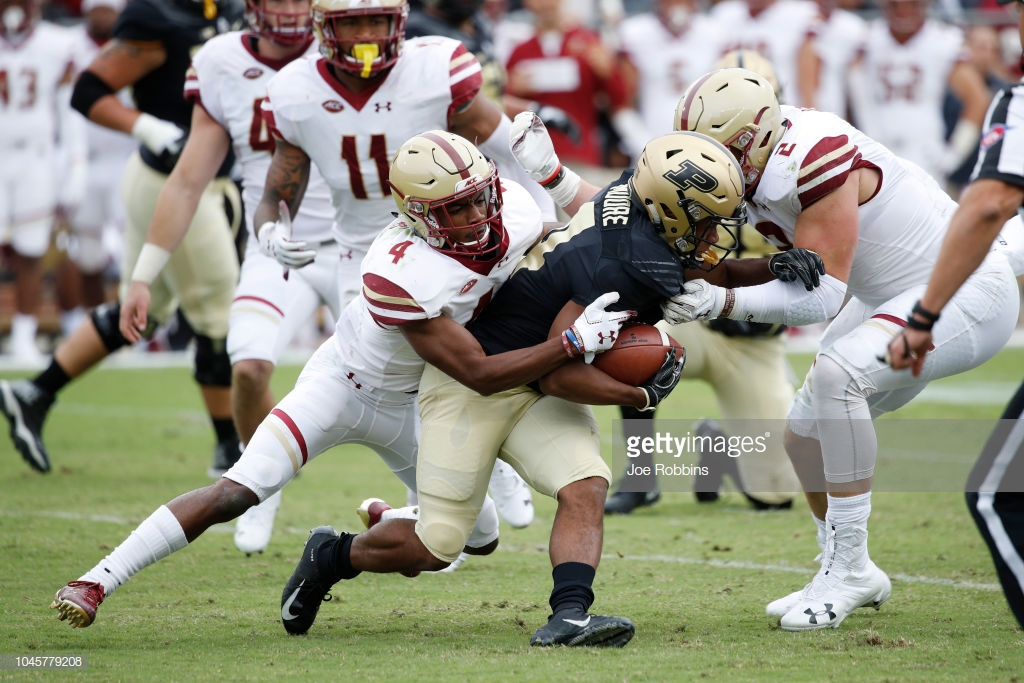 – Fluid player who doesn’t show stiffness in his turn
– Comfortable in press man coverage, seeks contact, and shows ability (though needs more consistency) with his jam and riding receivers to the sideline
– Good leaper who times his jumps really well on vertical routes
– Reads quick/three step game well in off coverage and closes on the ball quickly
– Very productive junior season, ballhawk
– Underclassmen with room to grow, isn’t a finished product yet

– Slight build, lacks great size and bulk, will be overmatched in the NFL
– Average athlete who will struggle against bigger, faster receivers, questionable deep speed and unlikely to turn in a great 40 time (4.5+).
– Needs to be more physical in coverage and in the run game, too passive versus the latter and generally not involved
– Prone to biting on double-moves, teams will use his aggression against him
– Can get boxed out on short, breaking routes and doesn’t have strength/size to finish the play
– Drag down tackler and struggles to get his man on the ground
– Primarily played one CB spot (right side)
– Lacks starting experience

Hamp Cheevers. I almost hope he becomes a Steeler just so I can say “Hamp Cheevers” every podcast. Say that name out loud and tell me you’re not smiling.

Ok, let’s talk about him as a prospect. Cheevers does have good ball skills. Hard to pick off seven passes in your first season as a full-time starter and not have that trait. Some of the picks I saw were a little fluky, tipped passes, terribly thrown balls, but still, the dude finished plays. More than you can say about the Steelers’ secondary and at a baseline level, this team must target players who can create splash.

He reads the quick game well. Against Florida State, reads the throw to the flat, and picks it off, taking advantage of it being thrown behind the receiver.

Cheevers is a good leaper who times his jumps well and is capable of high pointing the football.

But he’s undersized and underpowered, a dubious combination. Lack of physicality hurts him against the run, he’s barely a factor, but as a tackler too. Takes plenty of effort for him to get the job done and that’s at the college level. Only going to be more difficult in the pros.

Has to wait for help to come over and take down this FSU receiver after allowing a long completion.

He can be fooled by double-moves too. Happened twice against NC State, which we can see thanks to the All-22. At the top here.

And the bottom here.

Don’t think he’ll test like a great athlete. So he’s on the small side, not super physical, with a likely average workout (his vert will probably be decent). Tough sell. He’s not as tall nor quite as lanky but reminds me a bit of Harlan Miller, a 6th round pick in 2016 who’s struggled to stick in the league. Cheevers may best be moved to free safety at the next level.

Games Watched: vs Temple, at NC State, at Florida State, vs Syracuse