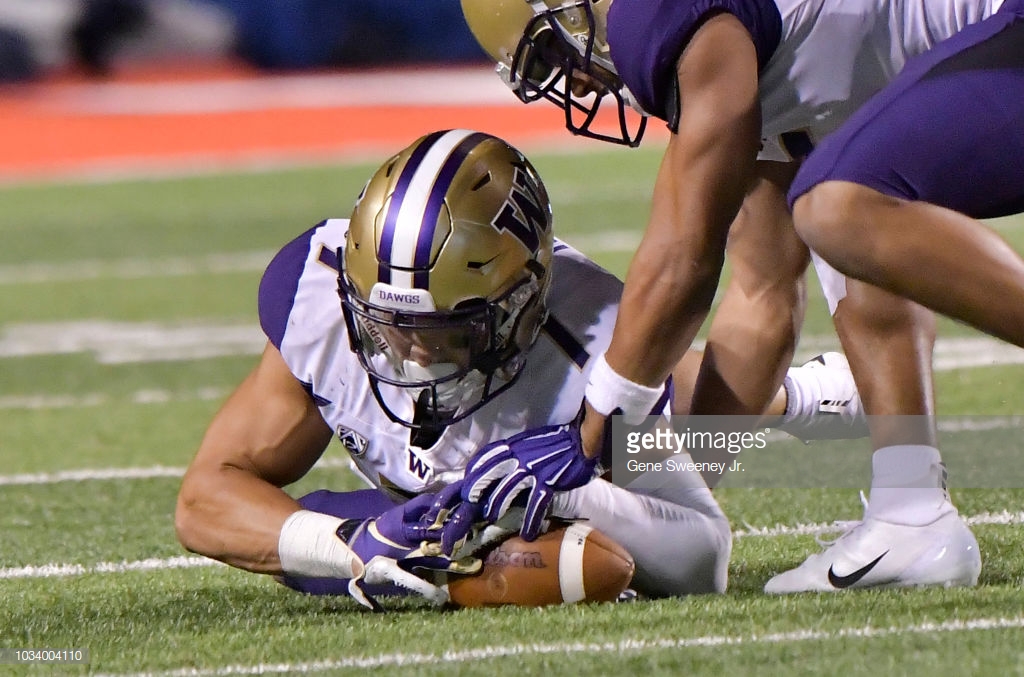 Rapp has experience playing in the box and as a single high centerfielder, though his traits are likely better suited for an in the box role. He has recorded seven career interceptions and six sacks while collecting numerous accolades such as All Pac-12 in both 2017 and 2018. Rapp has started since his freshman season and it’s easy to see why when you consider the traits he brings to the table.

The Washington safety is as technically sound as a safety prospect comes. Not only does he always take good angles to the football but he packs a punch when coming downhill. Auburn running back Kam Martin is stopped dead in his tracks when meeting Rapp despite carrying a ton of momentum behind him.

Showcasing an ability once is a highlight, showing it multiple times consistently makes it a trait. Rapp’s ability to lock on to moving targets and consistently take the right angle from the secondary is a great trait. He is rarely fooled even by the shiftiest ball carriers. Watching the Washington safety play, three key attributes consistently revealed themselves – great angles, big hits and consistent tackling. Throughout my watching of the Washington safety, I cannot recall neither one poor angle or one missed tackle and as you would expect, hard hitting and consistent tacklers are always in high demand,

Moving on to his pass defense skills, Rapp is a very smart and instinctive safety. He has great route recognition skills as he picks up on route concepts and patterns quickly and with his immediate short area burst, he is usually in position to lay a hit on the receiving target. The Washington safety sees the slant/flat concept and immediately starts breaking towards the middle of the field. By the time the ball hits the receiver running the slant pattern, Rapp is right there to lay the boom and is able to dislodge the ball, leading to an incomplete pass.

Rapp also comes with the ability to play in the slot and he can be effective in a pinch. It’s unlikely that he will be able to carry or defend any vertical routes but he has no problem covering any short to intermediate routes. The safety’s quickness shines through again as he breaks on the slant and is able to come up with a pass breakup. Rapp is no easy target in man coverage as his physicality makes him a tough man to beat when it comes to contested catches.

Rapp’s short area burst is a true elite feature that really separates him from a lot of safeties in this year’s class. Though he only finished with six career sacks, he always made an impact whenever he was tasked with blitzing. Watch above as it looks like the Washington safety was shot out of a cannon, covering roughly 15 yards in about three seconds. Whether it comes to stopping the run, stopping the pass or even getting after the quarterback, Rapp’s short area quickness is the backbone that his game is based off of.

Moving downhill is exceptionally easy and natural for the Washington safety but it is a different story when it comes to moving backwards or laterally. He has limited range and not the natural lateral athleticism to be a centerfield safety. Rapp is best suited as an in the box strong safety where he can play to his strengths and be put in position to succeed. He has great size for the position as well at 6’0 and 200 pounds, showing the physicality and toughness to survive the NFL game.