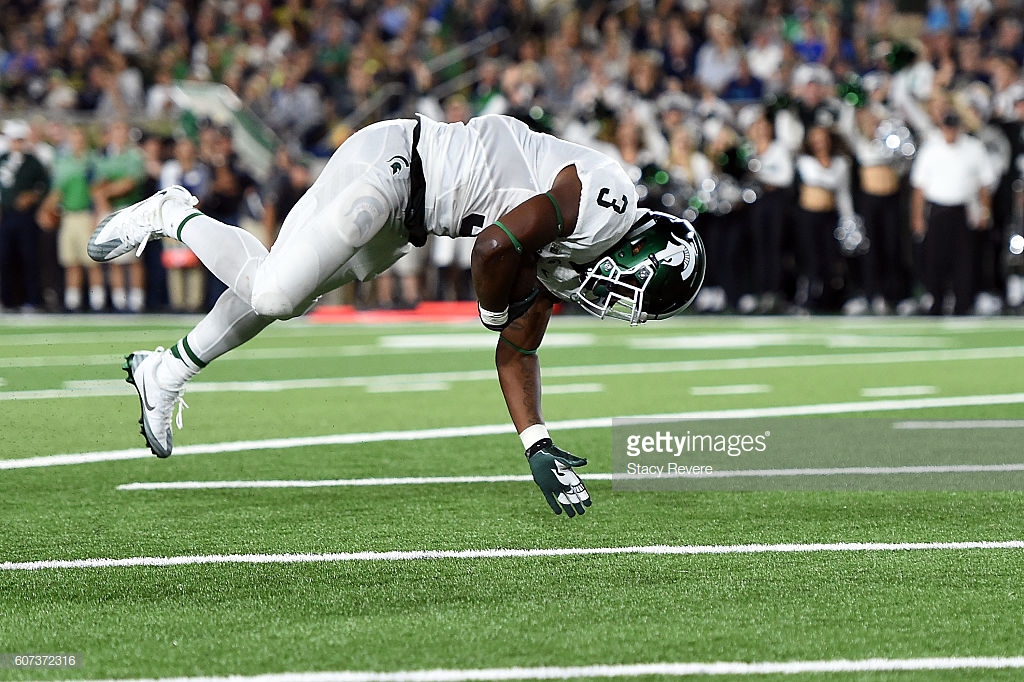 – NFL size and build
– Strong lower half with excellent leg drive, runs hard and churns out tough yards
– Downhill runner who doesn’t dance, works to get vertical
– Good hands out of the backfield, feels like a natural catcher and asset in the passing game
– Superb in pass protection, as good as you can hope for from a college back, takes pride in his work, stays square, plays with power, and seems to have no issue sacrificing his body
– Shows flashes of better athleticism than you’d expect
– Patience to set up and follow his blocks, works best in a gap scheme
– Power to run through tackles and hard to bring down with arm/lunging attempts
– Moderately productive when healthy

– Lacks a great burst through the hole, probably needs to drop some weight to improve his acceleration
– Doesn’t have the long speed to finish off plays, too easily tracked down by third level defenders
– Wasn’t a dynamic player in college who didn’t produce a ton of big plays
– Height causes him to run a little tall and loses power, will be stood up more than you’d like and will rely on running through contact often
– Struggles to make defenders miss in the open field
– Never had a defining season, failed to ever have 1000 yard campaign
– Didn’t have many college receptions (though ability to catch the ball seems strong)
– Has to be quicker on his release out of the backfield when one-on-one against linebackers, takes too long to make his move
– Plagued by injuries his senior year and had a very non-descript season

– 23 career starts for the Spartans
– Career: 610 carries 2855 yards (4.7 YPC), 25 TDs, 43 receptions
– Best season came in 2016, totaling 994 yards rushing and 5.4 YPC
– Limited to five games as a senior and averaged only 3.3 yards per carry, failed to find the end zone
– Suffered ankle injury in early September in 2018 that bothered him all year, sought redshirt before deciding to declare
– Four star recruit out of HS, also had offers from Alabama, Pitt, and Tennessee

Scott loosely earned some Le’Veon Bell comparisons, mostly for his size. But his run style, pass protection, and hands are all similar too as far some of the concerns I had on Bell coming out.

Scott is a tough, no-nonsense runner. Big dude with great lower leg drive who can churn out tough yards. He might be best known for this game-winning TD against Iowa as a freshman, running through half the team to stretch over the goal line a la Antonio Brown.

He knows where the marker is and you’re not going to prevent him from getting it.

What separates him is his pass protection. Normally one of the biggest issues for rookie backs. Guys who didn’t do it in school, weren’t taught how, and they become liabilities in the NFL. Scott seems to excel at it though. Collection of clips.

The problems? He’s not dynamic. Not a gamebreaker. Even healthy as a junior, he had only two runs of 30+ yards. Like Bell and James Conner, he probably needs to drop some weight to be a little more explosive. Slow starter though the hole and too easily caught in the open field. In the second clip, you see Scott struggle to explode through the hole and get vertical, turning what could’ve been a healthy gain into just a short one, again in thanks to his leg drive.

My first worry with him was another Andre Williams type, a big back out of Boston College who flamed out with the Giants because he was the ploddiest of the plodders. But Scott brings that extra element with his hands and pass pro and that’ll give him longevity in the league. Upside is limited and I don’t think he’ll be a starter because the position requires dynamic guys but there’s a role for him in the NFL. Better version of Jeremy Hill, a poor man’s Matt Forte.