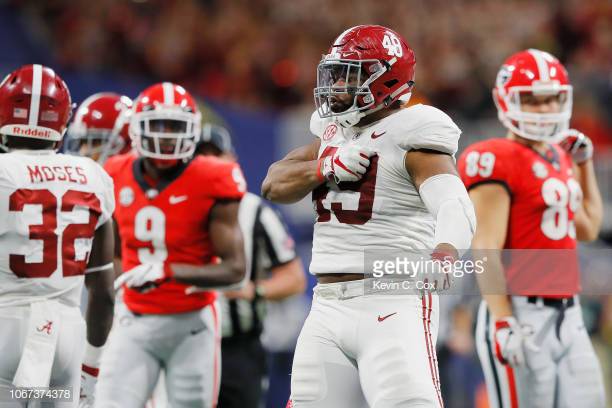 -Powerful initial punch to stun offensive linemen at the point of attack
-Knows how to play with leverage and gets consistent extension away from his body when playing the run
-Versatile defender that moved all over defensive line and filled a number of roles while at Alabama
-Strong anchor point against the run and maintains gaps with power
-Power-packed mitts and shows off ability to work push-pull, club, rip when rushing the passer
-Very productive defender that made a number of plays around the line of scrimmage for Alabama’s multiple fronts

-Doesn’t offer a ton of juice as a pass rusher; lacks explosiveness and bend in lower half
-Motors burns hot and cold snap to snap
-Inconsistent hand usage rushing the passer; has the ability, just slow to work to it consistently
-Sluggish get-off at the snap, especially late in games; could be a conditioning issue
-Labors to flash any sort of counter when rushing the passer

As an Alabama football fan, I watched an unhealthy amount of Crimson Tide games over the years, so I was pretty familiar with defensive lineman Isaiah Buggs heading into my film study on him.

Through live viewings I always held Buggs in high regard, but once I was able to get my hands on I came away wanting more out of Buggs. Yes he was productive at Alabama, but his individual tape just isn’t that eye-catching.

He’s a strong run defender that anchors well at the point of attack and uses his arms well to create extension while dropping his anchor at the line of scrimmage, tying up blocks.

As a pass rusher though, there’s just not much there, especially with him coming off the edge as a 4-3 defensive end like the Crimson Tide asked him to do throughout his two seasons in Tuscaloosa.

Buggs does have some explosiveness to his game and packs a major punch as a tackler when he’s square and uses proper technique.

He’s unblocked here coming off the edge against Mississippi State in 2017, but he reads his keys quickly, squeezes down on the down block and fires downhill for the big hit on the running back behind the line of scrimmage.

Buggs really knows how to use his hands when playing the run. He has a great first punch off the snap that allows him to get his hands into the offensive lineman’s chest, giving control to Buggs.

Once he punches and extends, he’s able to find the ball quickly.

Look at the punch and disengage here against Texas A&M in 2017, leading to the tackle for loss. It doesn’t get much better than that for a defensive tackle when playing the run.

Here’s one last rep against the run by Buggs.

This is from the National Championship Game against Georgia at the end of the 2017 season. He faced a smorgasbord of NFL linemen in that game and really stood out on tape, showing what he can be when the motor is running hot and the effort level is really there.

Look at the extension here at the snap and watch how he folds the lineman inward, blocking up the hole. He then is able to shed the block and make the stick in the hole.

As a pass rusher, Buggs has the ability to win inside with speed and power. He just can’t bend the edge like he was asked to do at Alabama in their multiple-front scheme. Ideally, he’s best suited for a 3-4 defensive end or 4-3 interior defensive lineman role at the next level, where he can line up over top of guards and go to work.

Like I said, he flashes the ability to rush the passer inside.

Look at the wipe to clear the offensive lineman’s hands and then the quick transition to the rip underneath, beating the guard cleanly for a sack against Texas A&M in 2018.

Buggs is a fine player that would make a nice rotational piece on a defensive line, but he kind of got lost in the shuffle at Alabama on the same defensive line with Quinnen Williams and Raekwon Davis. Buggs will need to test really well at the Combine to put some of the athleticism questions to rest, but he’s certainly going to be a piece to use in the NFL.