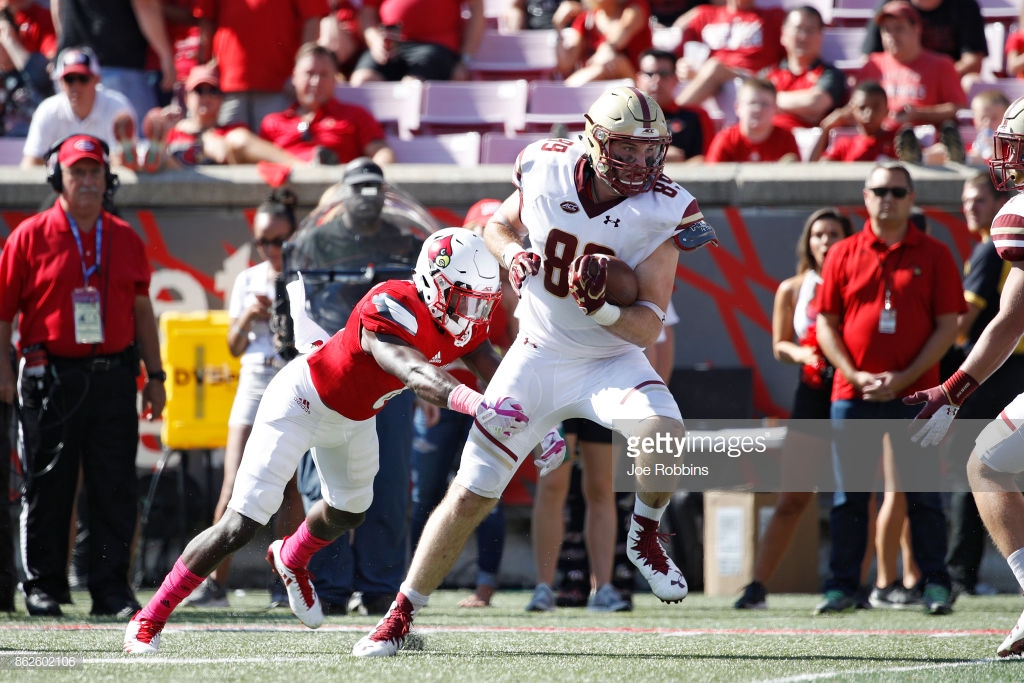 The value of the tight end position in the NFL might be the highest it’s been in recent times. The hunt for a player who can be physical on the line of scrimmage as an extension of the offensive line and help move the chains in the passing game is a need that all teams have.  As with all positions, one isn’t enough. Teams must have multiple options to fill each spot.

Boston College utilized 12 personnel a majority of the time and rotated six tight ends throughout the game.  Tommy Sweeney (#89) was utilized at the Y position, the H position and would also line up in the slot.

In the running game, he shows good aggressiveness and leg drive to move defensive lineman. He can mirror and control defenders to the outside and likes to use an aggressive chop to get the defenders hands down.  He has the agility to get to the second level on combo blocks or get outside and downfield to block on runs or screens.

At Wake Forest, lined up as the Y on the left side. On a fly sweep to the left, he shows good agility to get out in front, staying square up field and is able to get good push on the defensive back leading a big gain.

He does a very good job to sustain his blocks to the whistle and if there was a big gain on a running play there was a good chance Sweeney had a key block.

Versus Miami, first play of the game, lined up on the left side, on the line of scrimmage in a two point stance.  You see the pre snap communication mentioned earlier. Good quickness on this play to double team the defensive end with the left tackle and shows good timing to get to the second level to seal the linebacker to open a big hole.

Versus Clemson, from an inline Y position, he fires out against AP All-American Clelin Ferrell (#99). Get his hands up quickly, gets a helpful push from the left tackle and is able to sustain and seal a gap for the runner.

In the passing game, he showed enough athletic ability to be used on all three levels of the passing game. Pivot routes, curls and crossing routes in the short area, drives and outs on the intermediate and the corner route was an effective option deep. He uses physicality to get separation and has very good body control with the ability to adjust to the ball and to catch all around his frame. His hands are very good catching the ball away from the body and can make the contested catch with defenders on his back. Reception numbers could have been higher as he was open on many routes when the quarterback was pressured to quickly to get an effective pass away.

Vs Wake Forest, he’s lined up on the right wing. He sells the down block for a good 2 seconds before pivoting to the outside. Does a nice job adjusting to the pass behind him to make a tough catch.

At Virginia Tech, lined up on the right side of the line. He runs a drive route against the rover.  A slight adjust behind for a 17 yard gain.

At Wake Forest, from the left wing, he gets left alone on a deep corner route. Shows good body control to catch and easy touchdown

At Virginia Tech, from the right wing he runs a deep out off of the rub from the outside receiver coming up the seam. Good concentration with the defensive back undercutting the route. He makes a hands catch and good displays good balance to keep him inbounds and we finally get to see him run after the catch to get an additional 26 yards.

In the NFL game where the athletic pass catching tight end is en vogue, Sweeney is a bit of throwback. He more closely fits the block first mentality of years gone by.  But by no means should you underestimate his ability to catch the ball. His hands are very good and will catch everything in his radius. I am curious to see him with a more accurate quarterback who could help him add to his after the catch ability and if he can improve his separation ability he could prove to be a viable option. He’ll be a nice addition to any NFL roster and can probably stick around ten years as a TE2

Games Watched:  2018 – At Wake Forest, Vs Miami, at Virginia Tech, Vs Clemson