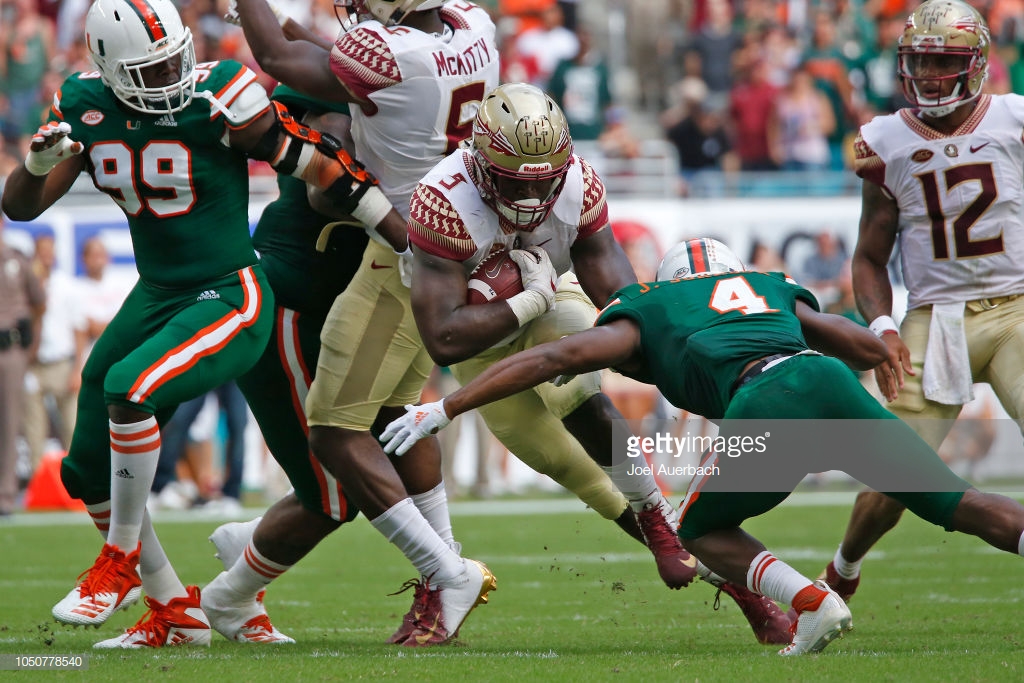 The Miami Hurricanes took the nation by storm last season, introducing a turnover chain for members of their defense. The concept is simple, any defensive player who records an interception or forced fumble gets to wear a glamorous, gold chain with the Miami Hurricane logo. With eight career interceptions and six forced fumbles, no player wore the chain more than Hurricanes’ safety Jaquan Johnson.

Johnson is a very aggressive and physical player. When he is not delivering a big hit, he is usually trying to rip the ball out. The Miami safety’s awareness is a big part of his game as he is always thinking of how to create a turnover. Johnson’s aggressive nature leads to an aggressive strip. The NFL requires and rewards players who are aware of the football and Johnson passes all the tests in that regard with six career forced fumbles.

Another area the safety thrives in is defending the run. Johnson is great at defending the run and filling in as an extra defender in the box. He comes downhill quickly and takes clean angles to the ball carrier. Throughout his tape, Johnson demonstrates consistent tackling, rarely missing any tackles and this is because he constantly takes good angles to the football. Whether the play is down the field, in the backfield or near the sideline, Johnson takes a clean route to the ball and wraps up his target with an aggressive and powerful takedown. Most impressive on the play above is his ability to laterally shuffle and still stuff the Virginia quarterback short of the chains. Johnson’s tackling ability comes up clutch on third down as he makes many key stops short of the chains.

The Miami safety excels in coverage when it comes to short or intermediate routes. Johnson sniffs out short routes quickly and with his aggressive play combined with his closing speed, he delivers punishing hits near the line of scrimmage. The crushing hit on the flat is just one of the many examples of Johnson using his body as a battering ram against short passing plays. Johnson is a force over the middle, breaking up a few slant patterns over the middle and on passes to the sideline.

Johnson’s game gets compromised due to a few bad habits. His eyes and aggressiveness lead to all the highlight big hits but they also have their downfalls, including being late on more than a few throws. It seems on the play above that Johnson is tuned in to the outside receiver and is late to picking up the slot receiver coming over the middle. He even hesitates for a second and as a result, he is late to the zone and the pass is completed for a first down. His struggles in coverage and average instincts as a center field safety hinder his ball skills. Though Johnson has recorded eight interceptions over his career, many are the result of tipped passes rather than straight instincts.

Perhaps one of his worst showings on tape, Johnson gets caught flat footed staring into the backfield and is partially responsible for giving up a big play. The play action leaves the safety with cement feet and he is too late to help break up the go route to his left. Without elite athleticism or range, this play is already very difficult for Johnson to get to, though it becomes an impossible play when his diagnosing skills lag.

Teams would be foolish to work Johnson in as a true center field free safety at the next level. The NFL is all about putting players in their best position for possible success and for Johnson that is as an in the box strong safety. There, the Miami safety will be able to use his physicality, toughness and ability to defend any short or intermediate routes to his advantage. Sticking him in center field will only expose his shortcomings. Johnson should be able to carve a role on a roster with his ability to play in the box and his experience on special teams.