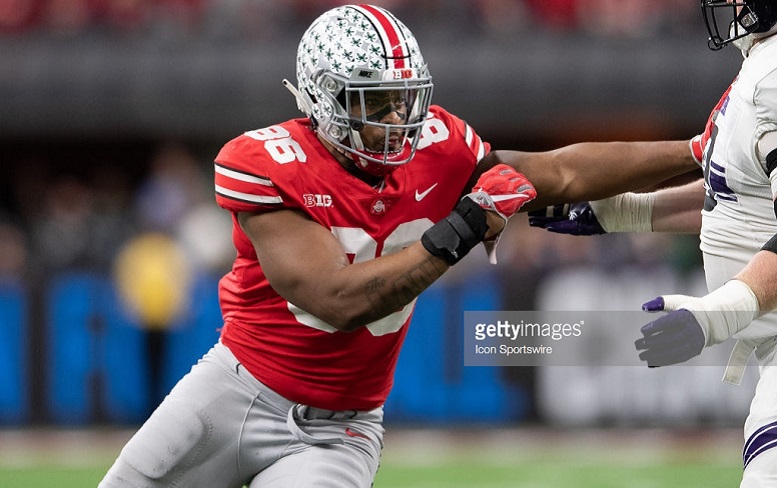 Dre’Mont Jones is an interesting player.  He doesn’t have the size you’d usually see in defensive lineman. He’s listed at 6’3” which means he’s probably a little shorter and he weighs in at 286 lbs. That’s pretty light. Common with lighter lineman is quickness and agility and Jones doesn’t disappoint there.

The first thing you notice when watching Jones is his first step. He is very quick at the snap and can get penetration into gaps to disrupt blocking schemes and running lanes in a flash. He played primarily as the 3 technique in Ohio State’s four man front and was able to penetrate the inside gaps with regularity. This is great when it works but if it doesn’t, he can be easily pushed aside rather easily.  A lot of his success in the run game relies on the 1 gap technique.

At Penn State, just quickness at the snap to split the B gap and get a TFL

At Penn State, a club swim to get outside the tackle and shut down the outside run.

Vs Northwestern, 3 and 1 and he’s lined up in the A gap. Fires out with great leverage and is able to get around the ankles of the RB to stop him cold.

Vs Northwestern, he reacts to the pulling LT to sidestep to the inside of the LG blocking down. He then gets skinny to slide inside of that pulling tackle at make a tackle at the LOS.

When facing up with blockers or playing a 2 gap technique he struggles.  He gets upright more often than not and that gives offensive lineman a chance to get into his chest. Furthermore, his punch into their pads, to stun them is generally ineffective. He doesn’t show the ability or upper body strength to stack and shed blockers regularly. He’s much better at avoiding or sidestepping blocks than taking them on.

Vs Washington in the Rose Bowl. This was a play where he was able to shed. Taking on the left guard (#76), he’s still too high but he’s able to extend his arms and as the RB comes he rips with his right hand to clear his left arm for the tackle.

As a pass rusher, he showed improvement this year.  In his sophomore season he was often taken out on passing downs. Early on in the season, before teammate Nick Bosa was injured he was asked to rush from the inside often being lined up as the 0 technique head up over the center.  Once Bosa went out, he was most often used to rush from the edge. Most of his effectiveness came on the inside between the 0 and 3 technique positions

Vs TCU, he’s lined up at the 0 tech. TCU tried a shovel pass which he steps in front of and takes it 29 yards for a TD.

He displays great effort and active hands to swipe and chop at the hands of the lineman. His hands didn’t always connect on his swipe/chop and the diminished his rush greatly.  When he landed his hands he would combo it with a club, rip or swim move.  With improved hand usage could improve his pressure numbers greatly. He used the spin move a lot in the games I watched. Its quick and looks like would work but it didn’t help him much from what I saw.

Vs TCU from the 3 Tech. He takes an outside angle. The LT sets up too far outside and Jones give him a club to the inside to get the sack

Vs Northwestern, he swipes the outside arm of the RG to get him off balance and he has a clear land to the QB.

Love his motor and pursuit. He was always making an effort to get to the ball not matter where it was on the field.

So how would he fit in Pittsburgh? Initially he could be a rotational defensive lineman who could be used to rush from the inside on passing downs. With added weight and ability to shed blockers he would be a starter a couple years from now. His best fit is as a 3 tech in a 1 gap defense.

Defensive line isn’t one of the biggest needs for the Steelers. They do need depth but that may be too high to take depth as most right now have Jones going in the second round. The NFL loves speed not matter the position.  You can’t teach speed and Jones has speed. Is that enough to take him in the second round? Not for me.