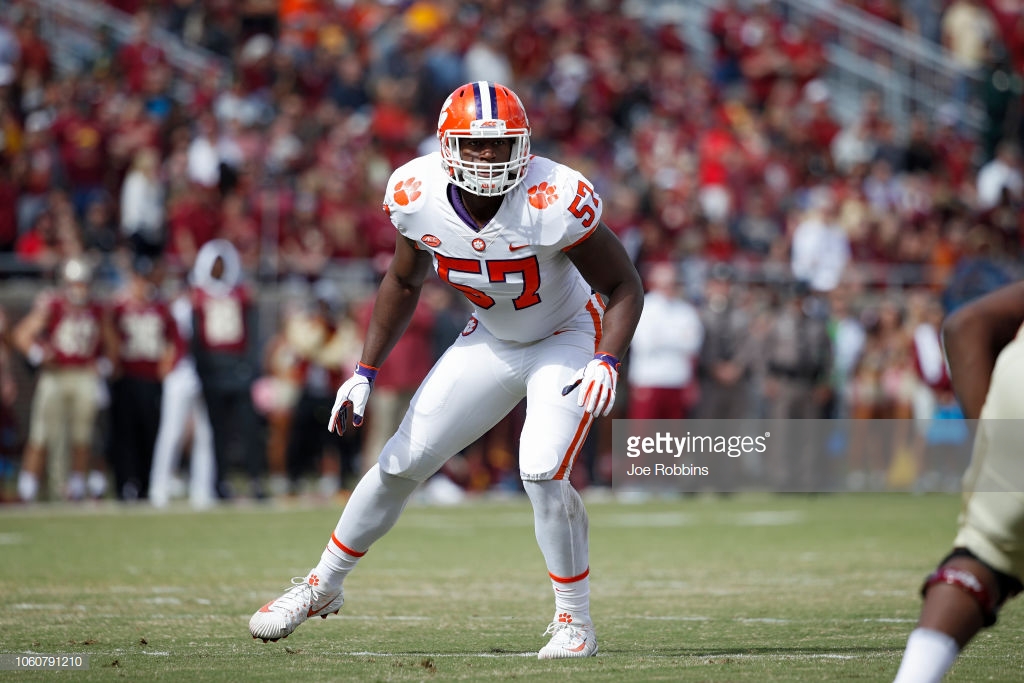 – Extremely limited athlete who seems to expend a ton of energy moving sideline to sideline and backwards
– Awkward mover, very deliberate in his steps, stiff player who struggles to cover ground
– Lack of athleticism makes him late to the spot, has trouble getting proper depth, closing on the ball in coverage, and playing the ball on the edge
– Far from a dynamic player who lacked splash plays and will struggle even more at the NFL level
– Didn’t play a ton of snaps at Clemson, rotated out for passing situations, and used on “run downs”
– Takes false steps trying to get downhill in the run game, can cause him to be a step late through the gap
– Difficulty taking on base blocks against guards and centers, too easily washed out, especially for a guy of his size
– On the ground too often
– Offers little as a pass rusher, best success will come along the interior against running backs when he has size advantage, shows no bend the few snaps he saw on the edge, very tight hips and ankles
– Will have hard time finding an every down role in the NFL and lacks the speed/range to be a strong special teamer, though hit power and physicality are pluses

Unfortunately, I fear Lamar is one of those classic cases of an underclassmen who shouldn’t have declared early and will be burned because of it. Everyone has their reasons for leaving school and even with a low draft projection, it can sometimes still be an understandable choice, even if ultimately the wrong one.

There’s some good with Lamar but you have to search far and wide to find it. The more I watched, the more I saw that was positive but still, it felt like a struggle. Just compare the detail of the notes from the good and bad section. Rarely is it as lopsided as it is. But we’ll begin with the positives, like always.

Lamar is best known as a physical player and thumper in the run game. His size provides hit power and lets him make some plays in the run game. When able to come downhill without changing direction, he can close with decent quickness and capable of finishing the play.

I do like his discipline in the run game. Patient, doesn’t try to overrun things, and keeps the back contained. Some little plays that are barely perceptible on tape because it’s a guy doing his job. Nonetheless, it is a positive. Effort isn’t a question with him either. He’ll run down the ball the best he can.

Now to the bad. And there’s…plenty. Lamar is about as awkward of a player in space as you’re ever going to watch. He runs like someone never letting go of the “strafe” button in Madden. Short, choppy steps, everything feeling clinical and more mechanical than whatever the heck they make McDonald’s Chicken Nuggets out of. Honestly, it’s cringy to watch.

Look at him here try to flow to the edge. There’s plenty of movement and energy in his hands and feet, arms pumping, legs moving, but he’s having such a hard time to cover any ground.

Again here on the edge. In position to make the play but too slow and clunky to close. He does ultimately make the tackle but that’s not going to work in the NFL.

In coverage? Just as bad. Turn away when you see him go through coverage drills at the Combine.

They aren’t all problems with him in space either. He can be overpowered in the run game too, on the ground too much. I know this against GT’s triple option offense but still, he’s completely run over and taken out of the play.

Lamar is the definition of a straight-line player whose flaws come into crystal clear view when you ask him to do anything else. With the definition of a “run first, 1st-2nd down linebacker” becoming less and less of a thing (even being generous with the criteria, teams threw the ball more than they ran it on 1st/2nd and 10 in the first half this year) I don’t see how Lamar fits. His tackling ability and hit power looks nice for special teams but his lack of range there is a concern. Probably best on kicks where he can run in a straight line as long as possible. I think he’ll test poorly, in testing (my guess is he runs 4.75-4.85) and in drills. Reminds of me Shayne Skov/Josh Forrest and someone I couldn’t justify spending a draft pick on.

Games Watched: vs Georgia Tech (2017), at NC State, vs Boston College, vs Duke