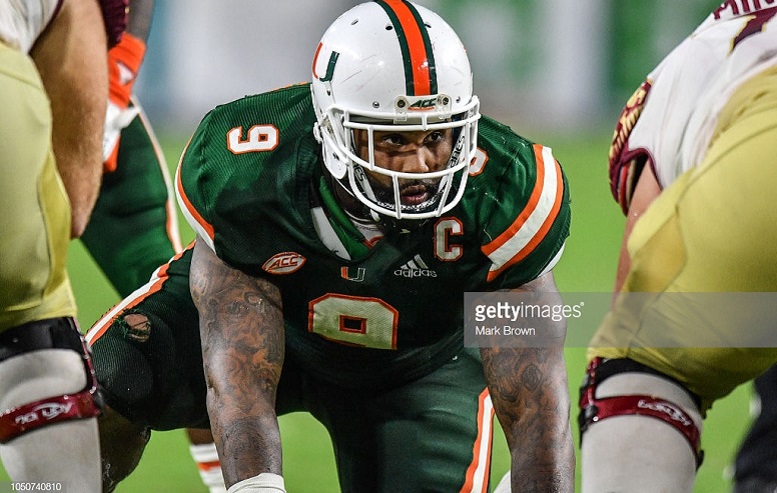 To say Gerald Willis (#9) has had an interesting college career would be selling his story short.  He started out at the University of Florida. He got some playing time there but conflicts with teammates and altercations on and off the field led at least in part to him transferring.

He transferred to the University of Miami and after sitting out a year (transfer rules) played in 9 games and ended up partially tearing his MCL. Then in 2017 he took a leave of absence from the team for reasons that included personal issues and academic concerns. Stepping back seemed to be the right course for him as he came back in better shape physically and mentally to compete.

He’s got the thick lower body you like to see for interior DL. Willis played primarily at the 3 technique on Miami’s four man front. They liked to stunt him on any down to loop around the 1 technique to try to open up lanes for him.

He has solid acceleration off the line and likes to rely on quickness and agility to avoid blockers rather than taking them on.  He likes to use a club/swim combination to try and get penetration whether it a run or pass. And when it works it’s great, you see good quickness and he makes plays in the backfield.

Vs LSU, club/swim to to get around the RT tackle and he absorbs the push from the TE to wrap up the ball carrier for a loss

Vs Florida State, here is a good look at his quickness. He’s too fast for the LT to down block and for pulling RG to get to him and makes a tackle for a loss.

His hands are very inconsistent. When he uses them right his can show a good punch and move offensive lineman. But when trying to shoot gaps he forgets to use his hands and will struggle getting off blocks.

Vs Florida State, on this rep he uses his hands well and plays with leverage. Shows a good punch to the chest of the RG to knock him back giving him space to move and make the tackle

Vs Boston College, and here is the other end of the spectrum. Step around the LT with his hands low and not ready. The TE ends up in his chest and drives him downfield.

Here are a couple of plays where he shows good awareness vs run and the pass.

Vs LSU on an outside run to his right, gets moving laterally, gets his hands up to take on the lineman and is able to shed and tackle.

Vs Duke loved the hustle on this play. On a sloppy field, good awareness to recognize the WR screen and chase to the outside to the tackle short of the first down.

As a pass rusher he was used from the 0 and 3 technique and again he relies on quickness and agility to get pressure.  He doesn’t use a lot of pass rush moves, play with good leverage to get push or use his hands well enough to disengage. When he tries to get around OL into gaps, it leaves his body open for the OL to get their hands on him and control him. He needs to improve how he counters when his initial move doesn’t work.

Vs LSU, uses a slap swim to the inside to get inside of the LG and gets his hand around the foot of the QB for the sack

Vs Pittsburgh, the left tackle starts out for the presumed outside rusher. When he drops out, that one outside movement by the LT get him off balance just enough for Willis to use his favorite move to get to the QB.

Overall, I was left wanted him to do more.  The first game I watched against LSU he looked great. He owned the OL and made a ton of plays. In the other games watched he just didn’t produce as I was expecting. He’s from Louisiana so maybe he stepped up his game against the home town school.

The question teams will have to answer when looking at Willis is are you drafting the guy who had 8 tackles, 4 TFL and a sack against LSU? Or the guy who looked like just a guy against BC often being shut down by most of the OL and TE’s?

He’s far from a finished product and with some good coaching he could maximize that potential and be a quality NFL lineman. He’s shown good ability but the consistency isn’t there. If he can be coached up to use his hands better, take on blockers and add some pass rush variance he could be valuable at a likely relatively cheap draft price.

Projection: First half of day 3

Games Watched: 2018 – Vs LSU, Vs Florida State, At Boston College, Vs Duke, and Vs Pittsburgh