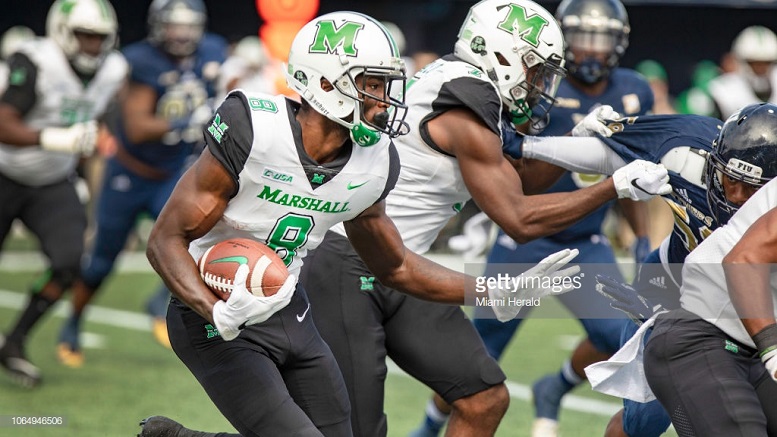 –Can create separation almost immediately off the snap.

–Adjusts well to poorly thrown passes, and shields the pigskin from defensive backs.

–Might be faster moving side to side vs straight ahead with his loose hips.

–Rarely tips off the corners where the pigskin is until it’s too late.

–Will already be 24 years old in April aka old for a rookie.

–Suspended by the Miami Hurricanes for 3 games in 2015 for violations of a team rule and sat out 2016 season to transfer.

–Gets knocked around by more physical defenders

– Tends to get sloppier running routes as the game wears on

–Almost no factor as a blocker

–A three star prospect via Rivals.com, 247sports.com, and espn.com.

–Played in 8 games and made 3 starts for Miami compiling 9 receptions for 112 yards and a touchdown.

–In two years at Marshall, he caught 133 passes for 1,944 yards and scored 17 touchdowns. He also failed to complete his only passing attempt.

Split out wide on a 2nd and 3, Brady is lined up directly across from the cornerback. At the snap, he fakes going inside and quickly steps outside. This isn’t enough to create separation as the defender keeps mugging him down the sidelines. The wideout tracks the ball in the air, making a nice adjustment to catch it with his body while the defensive back is still draped all over him. While the replay shows, Brady only got one foot down, that is a catch in college. That showed great concentration and effort by the young wide receiver.

Lined up far right on a 2nd and 6, the cornerback gives the wideout a 6 yard cushion. After the ball is hiked, Brady runs a short hook with his running back screaming into the flat. The back’s action moves the defensive back freeing up the receiver, who makes a nice adjustment to a poorly thrown pass. Brady secures the catch, swats away one defender and races down the sidelines for an additional 12 to 13 yards. It was his quick feet that made a short gain a much bigger play.

Once again split out far right on a 2nd and 17, Brady gets lined up man to man versus the cornerback. He races down the field hand fighting with his coverage. The wideout adjusts his body to catch a wormburner. It looks more like a dumbbell curl than a catch as he traps the pigskin with one arm against his shoulder pads while falling to the ground with his defender laying on top of him.

Lined up on the far left with a four yard cushion, Brady runs directly at his cornerback at the snap. He fully extends his arms, which gives away his leverage in blocking. His quarterback darts to the left. Even though the receiver matches the corner’s body movement, Brady is slightly behind aka out of position and could have been penalized for a hold as he continues to grab the defender’s jersey until the whistle blows. His blocking needs a lot of work f he were to become a Steeler.

Projection: 4th or 5th round pick