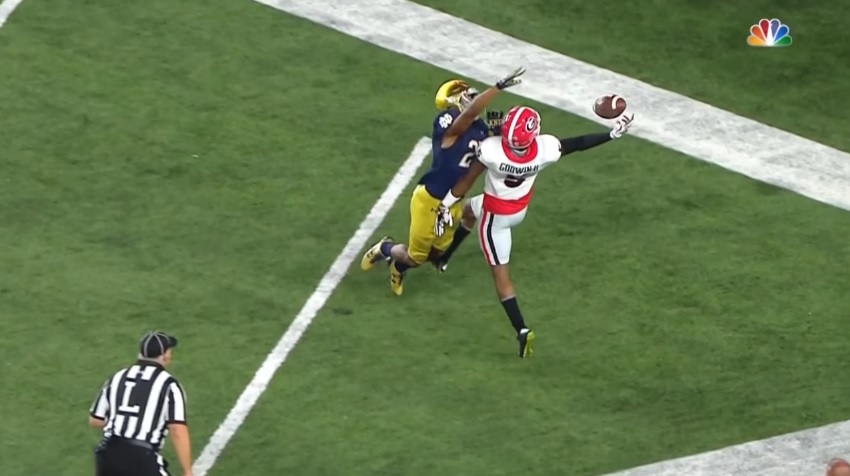 – Legitimate deep speed and playmaker down field and over the middle
– Capable of making spectacular catches, shows plus body control and awareness for where he/the sideline is at
– Hands catcher who plucks away from his body
– Quick to the tuck after the catch, good acceleration to reach top speed
– Works hard to adjust to the ball away from his frame, does a nice job of tracking the football
– Shows snap and separation at the top of his route
– Can win with his release off the line, especially on vertical routes, quick-twitch player
– Some slot/X receiver versatility in school
– Dynamic player, made most of his opportunities
– Willing blocker in the run game
– Tons of starting experience

– Very slight bad, underweight, needs to add muscle and at least another 10 pounds to hold up as a full-time receiver
– Short arms (less than 30 inches) and struggles to finish some plays on poorly thrown passes
– Struggles in contested situations due to his frame
– Problems beating press, can get beat up, especially on non-vertical routes where he knows he has to break down, better in the slot with more space/leverage
– Despite effort as a blocker, has trouble cracking safeties due to his size, better on stalk blocks against corners
– Limited production, didn’t play a ton of snaps, only one year over 400 yards, never had more than 38 catches
– Doesn’t have the return experience/production you’d expect out of a speedster of his size, something he’ll need to learn in the NFL (questions about his frame as a kick returner)

Godwin would’ve been an easier evaluation and a boost to his draft stock if he simply got the ball more in college. But he played in a run heavy system with a ton of talent around him at receiver, making it tough for him to see the field and get the opportunities others do.

But he took advantage of many of those chances. Goodwin flashes a ton of speed and big play ability. Like this 75 yard catch against Vanderbilt this year, splitting two defensive backs and showing incredible drive to finish the play and find the end zone.

How about this end zone, one-handed fade? He has good hands and even better ability to track and find the football in the air. This against Notre Dame as a junior.

More of his body control, getting both feet inbounds along the sideline.

The negatives. A lot revolves around his size or issues his size presents, which is predictable. I forgot how light he weighed in at the East/West Shrine Game. Just 174 pounds? Not good enough. If we assume that’s what he weighs in at the Combine, and let’s hope he’s had a couple milkshakes, there’s a very thin list of receivers with NFL success at that size.

Watch him struggle to beat press coverage here. Top of the screen.

Without a lot of production to look at, he never even had a 100 yard game in college, and a slight build, it’s hard to see him be a highly coveted asset in the draft. Doesn’t mean he can’t play, I think he can, but he’s a Day Three guy, even after an impressive Shrine Game. Travis Benjamin is a good comp for him.