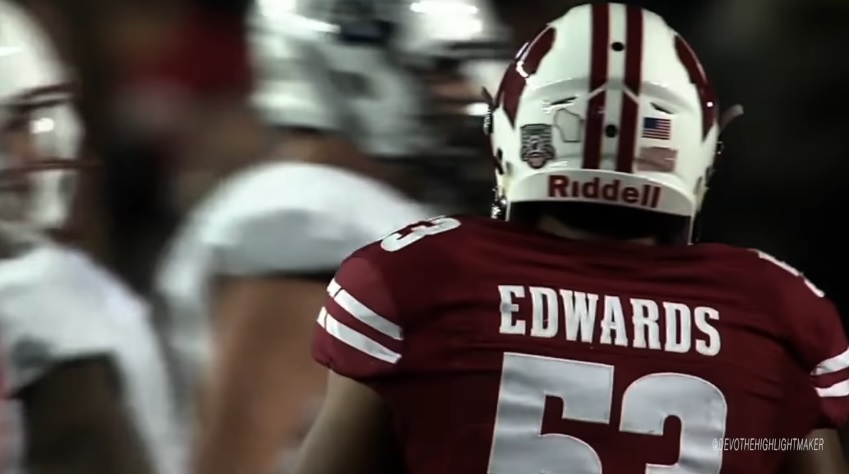 A few years ago, the Pittsburgh Steelers drafted a very good linebacker prospect from Wisconsin named T.J. Watt. Wisconsin will send another very talented linebacker prospect named T.J. to the NFL Draft this season as well. Inside linebacker T.J. Edwards has patrolled and started on the Badgers’ defense since his freshman season and has no shortage of experience. The senior linebacker has seen it all and comes into the NFL as a very developed and seasoned prospect.

Just who is T.J. Edwards? Well for starters, the Wisconsin linebacker has great awareness and intelligence which he uses to his advantage. Just at a quick glance, you would not expect him to be the kind of player to be capable of defending a jet sweep but he manages to make it work with his intelligence. Edwards diagnoses the play quickly, comes downhill and engages with a blocker. He then uses his arms to create leverage between him and the engaging blocker, giving him the opportunity to break off the block and make the tackle. Edwards is a tough player in the trenches and his intelligence really helps elevate his game.

Here is more of that toughness I just spoke about. What a crushing hit delivered by Edwards. I am sure that is one that the running back is going to remember. The Wisconsin linebacker is not overly aggressive, instead letting the play come to him. He sees the play happen and then attacks. On the play above, he sees the handoff and the lead blocker pull to his side. Once the lead blocker is engaged with a different defender and the running back has hit the line of scrimmage, Edwards attacks and he delivers a punishing hit.

Edwards really makes his money for his instincts and awareness in zone coverage. While his 10 interceptions will get him the praise and money he desires, its plays like the one above that really show how aware he is in coverage. The Wisconsin linebacker is great at picking up crossers in his zone while also staying disciplined to his area. Edwards is in a tough position of picking up a drag route and a running back hitting the flat, a true two on one disadvantage but the Wisconsin linebackers manages to stop the play for no gain. Watch his discipline to observe what is going on in front of him and then the closing speed to make the tackle for no gain.

Now at 240 plus pounds, Edwards is not the linebacker to be able to move well in man to man coverage. His instincts, intelligence and toughness cover up his lack of elite athleticism thus putting the linebacker in a situation that requires natural athleticism like man to man coverage is usually not a successful strategy. While he is good at coming downhill, Edwards does not have the same engine to move laterally or backpedal at the same speed. Here, he is late at getting to the flat, resulting in him playing catch up and a missing a tackle.

If Edwards can not make the tackle immediately, he is in trouble. The linebacker is stiff in space, especially when it comes to his change of directions skills. Edwards’ hips are incredibly stiff, which leads to a lot of moving parts when it comes to changing direction. Instead of one fluid motion, there is a lot of stop and restart in his hips and footwork and he is left vulnerable because of this.

The Wisconsin linebacker comes with a couple limitations to his game but as documented, he covers them up with his instincts and intelligence. His toughness and ability to diagnose plays make him one of the better linebacker prospects in this year’s draft. While his ceiling may not be as high as others, he comes with a higher floor than most prospects as he is equipped with experience. With his success defending the run and ability to drop into short zones, Edwards could develop into an adequate MIKE linebacker in a 3-4 defense.