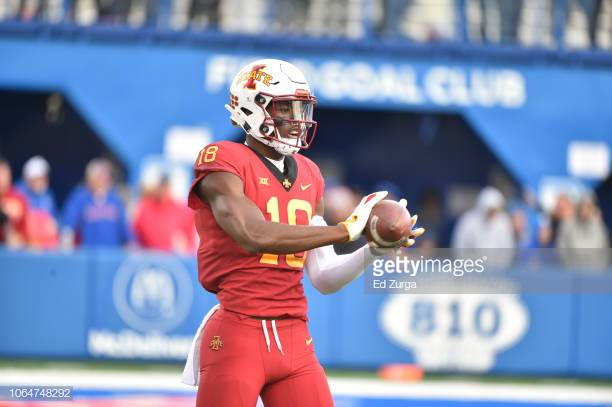 With Butler standing at a massive 6’6, it does not take a genius to figure out that he would be a great red zone target.

The Iowa State wide receiver is almost uncoverable when it comes to fades in the red zone. It is a damned if you, damned if you don’t situation with Butler in the red zone. You can’t press him at the line, as he is just too strong, and will you beat you with his hands. If you choose not to press him on the line, good luck trying to beat a 6’6 receiver with long arms in a jump ball situation. Butler comes with one of the biggest catch radiuses in this year’ class as his 6’6 frame, long arms and leaping ability make him an undisputed jump ball winner.

Blessed with his rare physical attributes, Butler knows how to use his size to win. Here he is one on one with Texas cornerback Kris Boyd, who is no slouch. The receiver’s size means that opposing cornerbacks will likely be allowed to get away with more physicality than usual but Butler knows how to handle that. Butler uses his long arms to subtly swipe away Boyd’s own arms and then makes a great catch with the Texas cornerback all over him. Cornerbacks are not going to be able to outmatch Butler in physicality and when it comes to contested catches, the Iowa State receiver is always going to win in that regard as well.

For a man his size, Butler is great at keeping his body under control. His quarterback play was far from anything special at Iowa State but Butler was able to bail out his quarterback on numerous occasions by using his body control. Whether it was by coming back to the football, high pointing the football or keeping his feet in bounds, he was able to use his body to either create or sometimes even force an area to catch the ball.

Now here is where it gets fun. Butler led the Big 12 in yards per receptions not because of his route running ability, or his elusiveness but because he is so big. One man is not enough to take down the 6’6 receiver as it takes a pack of defenders to take down Butler, who has great strength and contact balance. The play above where he breaks four tackles on his way to the endzone summarizes what kind of open field strength he brings.

Areas that Butler struggles and will likely hinder his potential at the next level mostly focus on his athleticism. His lack of athletic traits is concerning as the Iowa State receiver really does not have the footwork or quickness to be a great route runner. He is sluggish at his cuts and while his release off the line is adequate, Butler is never going to be a possession receiver…and that is okay. His role is a vertical threat receiver who will line up at the X position and can make up for his lack of athleticism with his physicality, body control and size. His hands are where he runs into real trouble as Butler is very inconsistent at catching the football.

There are a good amount of catches across his tape where he makes one handed catches or catches that leave your jaw on the floor.

But then there are also just as many drops like this.

Butler suffers from inconsistent hands, mostly from lapses in concentration. For every incredible catch, there is a bad drop. He will have to clean that up or find a way to improve at the next level should he hope to have a long career.

Drafting Butler brings a real X receiver who can beat press coverage while being an effective vertical and red zone threat. He also has experience playing in the slot, which he showed some success in. What he lacks in athleticism, he makes up for in physicality. Look out if a coach is able to get their hands on the lengthy receiver and polish his rough edges. Should Butler continuing to show his highlight reel ability while eliminating the blooper reel drops, he could enjoy a long career out wide.

Games Watched: vs Texas, vs Oklahoma, vs Iowa, vs West Virginia, vs Kansas