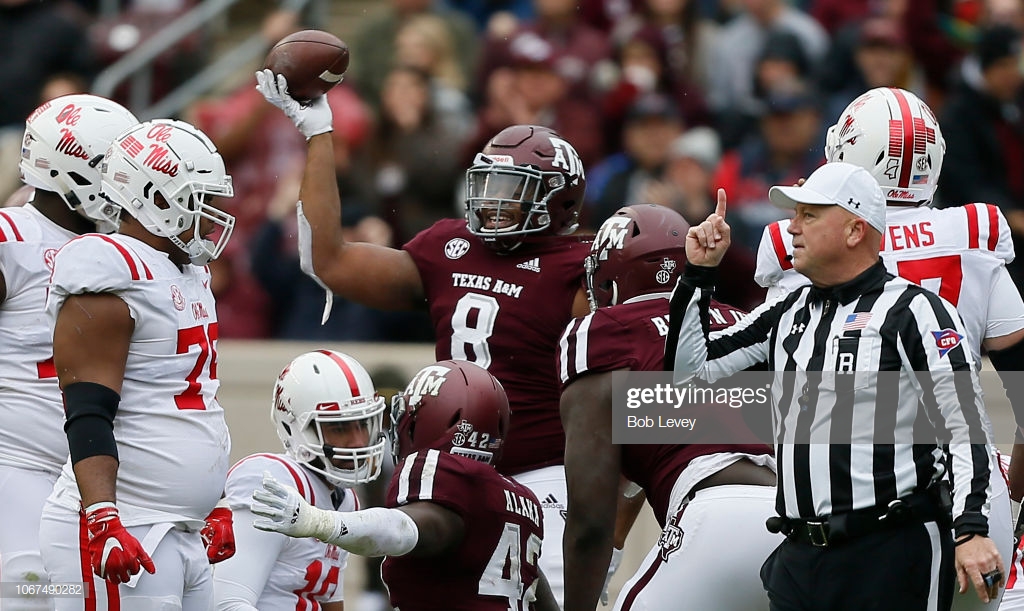 The Steelers will have decision to make along the defensive line this year. With depth of their D-line hitting free agency they’ll need to address this issue by resigning players, hitting the free agent market or through the draft.

Kingsley Keke (#8) was a key member of the Texas A&M defensive line the last few years. He was a 305 lbs defensive tackle for most of his time there but with players like Daylon Mack playing a more prominent role in 2018, he dropped 20 pounds so he could play more at the defensive end position in his senior season.

The versatility he displayed will only benefit him at the next level.  He has experience all along the line playing from the 0 technique over the center out to the 7 technique rushing on the edge.  Also adding to the versatility was the way the Aggies mixed up their defensive schemes allowing him to play in both 1 and 2 gap. He plays with his eyes up, always in the backfield, allowing him to flow to the ball and be aware on screen plays.

Vs Clemson, he’s lined up at the 1 tech to the right of the center. He comes across the face of the center and uses a rip and recognizes the screen to his left. He reacts quickly to chase down the RB for no gain.

Inconsistency was also a part of his game, a bit of a Jekyll and Hyde feel to it. Right at the snap it was easy to see he was consistently late, often being the last DL to move. This delays everything: his hands coming up to meet the OL, the ability to move laterally on outside runs and being able to pressure the OL while pass rushing to name a few. This makes him more likely to play high limiting his play strength and leaves him trying to overcompensate for his tardiness.

When he was able to fire out at the snap he looked like a different player.  Good punch in his hands and they were active keeping the lineman’s hands off him. He played with good leverage able to stand up OL and shed vs the run, drive back the OL with a bull rush and could anchor vs a double team (more so when he was at the heavier weight).

At Florida, he lined up over the right guard (#88 in 2017), he uses good leverage and hand placement to stand up the guard, shed him and make a tackle in the B gap

At Florida, he is lined up as the 3 tech on the left side, playing 1 gap the defense slants right and he fights his way between the RG an RT to make a TFL.

Vs North Carolina State, lined up as the 3 tech on the left side playing more of a two gap scheme here he shows his strength tossing aside the 329 lb RG aside to make the tackle.

As a pass rusher he was able to produce pressure using a club/rip, slap/swim and the aforementioned bull. He added spin move late in the season and has the strength to add a push/pull.

Vs Kentucky, lined up as the 5 tech on the left side he uses a quick jab inside then swipes at the OT’s hands and rips underneath to get pressure leading to a Mack sack.

Vs Kentucky, lined up as the 5 tech on the right side he uses good leverage and hand placement to bull the LT back to the QB. Later in the game on a twist stunt he did the same thing to the LG.

Vs North Carolina State, lined up as the 1 tech on the left side he presses to the outside of the RG, uses a spin move to the inside to get the sack.

At Florida, he is lined up as the 1 tech to the left of the center. The defensive line all slant right and the QB takes off running for a huge gain. But look who makes the tackle catching up to the QB about 75 yards down field. You have to love this kind of effort.

He has the capability to play all along the line and back up all three spots initially and possibly be used to rush from the inside on passing downs. These clips highlight the good things he is capable off and I mentioned above the issues of consistency with quickness at the snap and effort from play to play. In reality, what you’re looking for from the depth on the roster is 15-20 plays a game to give the starters a breather. Coach Karl Dunbar has seen him play first hand while he was at Alabama. Can he get the most out of him for those few plays?