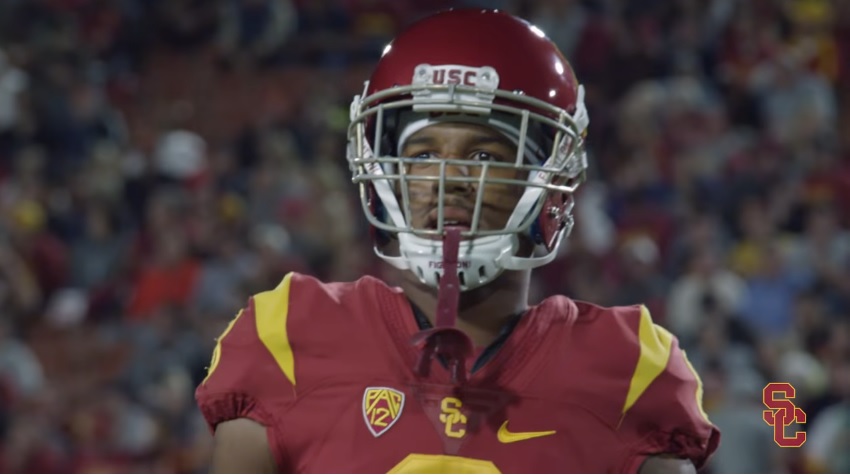 – NFL frame, looks the part to handle big Z-type receivers
– Aggressive and physical with his jam in press man coverage, does well to disrupt WR’s release
– Reads quick game well and trusts in himself to make the play, closes quickly on the ball
– Fluid mover who doesn’t show much stiffness in his turn
– Quickly recovers and gets back in-phase if beat off the line
– Physical player, shows hit power, and willing to play near the LOS, help in the run game
– Technique needs work but overall, reliable tackler who gets the job done
– Elite starting experience against quality competition, durable player who missed very little time in college career, played through injuries
– Experience playing all three corner spots
– Productive, especially early in his career, shutdown corner at USC

– Despite height, lacks length (30 5/8 inch arms)
– Good but not great athlete who could struggle against the league’s fastest receivers
– Tackling angle needs to be cleaned up, aims a little too low and tries to cut down players a bit too often
– Hands might not be the best, dropped some INTs
– Needs to play cleaner, called for too many penalties
– Self-admitted effort problems that hindered his junior year
– Lacked splash plays the last two years (zero interceptions)

Marshall was a last-minute add to the roster before this year’s Senior Bowl kicked off but I’m sure glad he got the call. That’s when he caught my eye with an impressive week, thriving in drills where offenses naturally have the advantage. I was excited to dig into his tape more and came away with a similar positive feeling as I did watching him in Mobile.

Marshall has good eyes and ability to close on the ball. Reads and works the quick game well.

While he didn’t make every play with the ball in the air, he shows the ability to play to the upfield shoulder, track the ball, and the strength to finish the play. Interceptions weren’t there but there were plenty of breakups.

He isn’t the world’s best tackler but for a corner, he does a good job. There’s a willingness and want-to, that’s almost a win in itself but he doesn’t often miss and has the strength to finish the play. Does tend to tackle too low but that’s something that can be improved with coaching.

Some of the negatives are hard to show in a clip. Lack of splash the last two years is an obvious worry, especially for a Steelers’ defense starving for splash. Maybe some questionable hands. Should’ve picked off this pass against Stanford last year.

There’s the penalties, flagged too often last year, and Marshall admitting his effort wasn’t where it should be is a question that will come up in interviews with every team. Here’s what he told the Orange County Register in April of last year.

“I say effort was a problem,” he added, “because the simple fact is you see me loafing around in a game and stuff like that. That’s something I have to change.”

But there is a positive in that too. Marshall was capable of being self-critical, admit he needed to make a change, and by all reports, did so. Head coach Clay Helton praised the work he put in this past year. So in a way, I admire Marshall making that bold statement about himself and then doing something about it.

Obviously, no picks in two years is a worry and I understand why fans – and Steelers’ scouts – would shy away from him. But Marshall is a good prospect who I think can make big plays in the NFL. You’re not spending a first round pick on him and personally, I’m willing to take that chance.