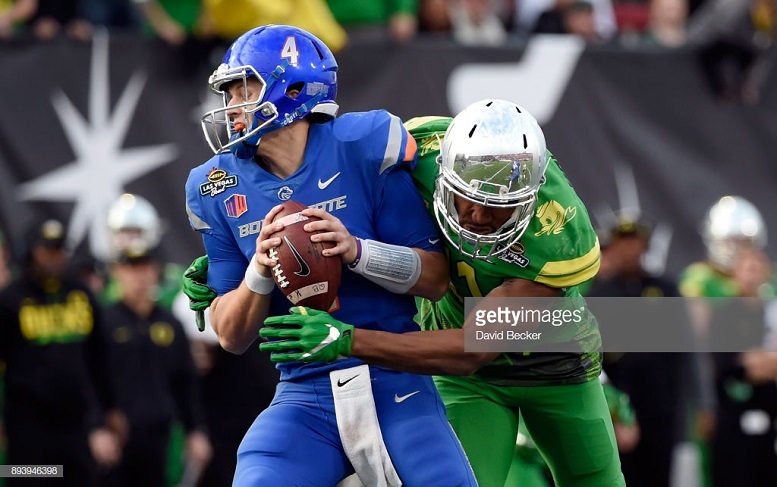 Justin Hollins (#11) is a long, sinewy OLB from Oregon. He played primarily on the strong side of their 3-4 and saw time on both sides of the defense. He was third on the team in tackles and led the team in TFL, sacks and forced fumbles.

Against the run, he’s a very good defender who knows his role and doesn’t go off script. On runs to his side, he shows good strength and leverage to set the edge vs blockers a force the ball back inside. On plays to the inside and opposite field he’s patient using his hands well to keep defenders off of his body and he doesn’t over pursue. He stays inside the runner and square to the LOS to cover the cutback lanes and reads and reacts to bootlegs and reverse’s well. He’s generally a good tackler, not a thumper, but gets the runner down.

At Washington, shows quickness to the inside to beat the block of the TE and takes down the runner for a loss.

Vs Stanford, from the right side he follows the pulling H back, stays square, inside the runner and makes the TFL.

At Arizona, they ran away from him for most of the game. Khalil Tate (#14) tried on this play but Hollins is able to chase him down to the outside for a short gain.

Rushing the passer, he displays good anticipation and the snap and can get up field quickly. He likes to use a violent chop to the hands of OL to get them down and shows solid bend to get around the edge. He also has good agility to press outside and counter to the inside to get pressure. He’ll use a club, swim and bull rush to mix it up and when he gets to the QB he goes for the ball causing 5 forced fumbles last season. You can check out his sack compilation here.

At Washington, from the right side he shows the speed and good bend to get the pressure.

Vs Bowling Green, lined up on the right side he uses a chop swim and speed to chase down to get the pressure.

Vs Stanford, from the right sides he shows the chop on the hands with speed up the edge to get the sack fumble.

e, on 4th and 1 he’s lined up on the left side. He doesn’t chase the play action fake to the middle. He’s balances, accelerates quickly to the QB and forces and early throw that ends up incomplete.

Being an actual 3-4 outside linebacker he has experience in coverage. He’ll line up on the slot to redirect was used primarily in the curl/flat zones. He’ll keep his eyes on the QB and flow with him and shows good awareness of receivers in his area. He handled short area Man coverage well on RB and TE and occasionally saw him run with wheel routes. With his length he presents a long obstacle for QB’s to try and throw over.

Vs Michigan State, lined up on the right edge, he redirects the TE at the LOS and takes the RB on the swing. Comes to balance, under control and makes the tackle for no gain.

Against Arizona, he’s lined up outside left near the slot WR. He doesn’t get a lot of depth but he shows how hard it is to throw over him getting up to deflect this pass.

Vs Michigan State, he showed a lot of good things on this play.  From the right side, he shows awareness to identify the screen, agility to get back into the passing lane and then athleticism to chase down and sack the QB.

Hollins is already on the Steelers radar and it’s easy to see why.  He has a high football IQ, can make plays against the run, can get after the passer and has experience in coverage.  He has a bit of an unusual build being so tall and thin. The closest comparison based on size I could find was Arden Key.

Length on defense is a huge asset if you know how to use it. He isn’t a finished product yet but there’s a lot of potential here. There is room to improve his pass rushing ability and his athleticism lead me to believe he can play Man in coverage.  We’ll probably start to hear more about Hollins leading up to the draft.

Games Watched:  2017: At Washington; 2018 – Vs Bowling Green, Vs Stanford, Vs Washington, At Arizona, Vs Michigan State