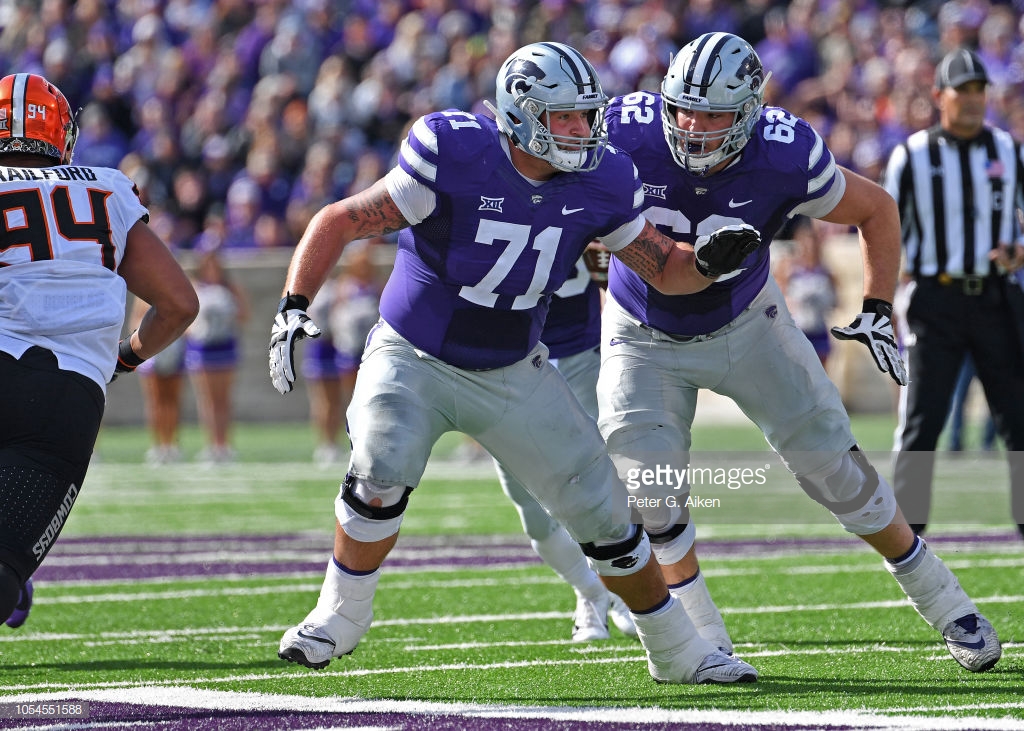 -Really good arm extension at the point of attack to win inside control of the defender
-Efficiently passes off twists and stunts, able to process them quickly
-Strong, powerful hands to latch onto defenders; excellent hand fighter inside
-Violent mean streak to his game
-Drops anchor consistently against power rushers and rarely loses ground
-Never have to question his desire or willingness on each snap
-Has missed just one game in his collegiate career and played center his redshirt freshman year

-Tends to overextend his upper body when working to the second level; lets weight get out over toes
-Footwork is inconsistent in pass protection, mostly with his kick slide and set on the edge
-Feet come too close together on initial set, leaving him vulnerable to speed or power
-High pad level due to build, but gets away with pad level due to overall strength
-Get get overzealous on his punches in pass sets, leaving him overextended against snatch/pull moves

-Four-year starter that started in 50 career games for Kansas State under Bill Snyder
-Three-year captain for Wildcats and former All-American and All-Big 12 tackle
-Played through a number of injuries throughout his career, missing just one game total
-Participated in 2019 Senior Bowl

There might not be a better offensive tackle in the 2019 NFL Draft class than Kansas State’s Dalton Risner.

A four-year starter and a three-year captain, Risner brings everything a football team should want in a tackle, regardless of if he plays on the left or right side of the line.

Risner started his redshirt freshman season at center for the banged-up Wildcats before sliding out to right tackle his final three seasons in Manhattan, KS. On tape, he has some of the best football IQ I’ve seen from a lineman in quite some time. He’s quick to decipher stunts in front of him, locates edge blitzers pre-snap, and tends to adjust on the fly as a blocker. He’s everything you want in a blocker, even if he is a bit unorthodox.

His slide step in the run game to move down into the line is a bit slow, and he had a couple of guys throughout his distinguished career cross his face, as highlighted by Solomon Thomas here in 2016. It’s a tough block to make, but one that linemen are asked to do time and time again. Risner is a step slow here and Thomas is able to knife into the backfield to blow up the play.

However, Risner got him back later in the game, latching and driving him down the field in the run game. Risner is so darn strong and really gets his feet going in the run game. He wants to bury people, and has a nasty, nasty streak to his game.

You need a guy like this on your offensive line. He’s going to protect his quarterback at all costs, try to absolutely wreck the guy across from him on every snap, and isn’t afraid to mix it up post-whistle without crossing the line.

While playing in the Big 12, Risner never really saw high-end pass rushers, but he did shut down Oklahoma State’s Jordan Brailford, who is expected to get drafted this spring, and also shut down Mississippi State’s Montez Sweat early in the season, as well as at the Senior Bowl.

Sweat did record three sacks in the early-season win over Kansas State, but two of them weren’t Risner’s fault. The first one, the Wildcats quarterback ran right into the back of Risner trying to scramble out of a clean pocket. The hit knocked Risner off the block, allowing Sweat to get in clean. The second one, the quarterback scrambled backwards out of a clean pocket right into where Risner was pushing Sweat.

The third one? Well, Risner showed what happens when he lets his weight get out over his toes in his pass set. Sweat hits him with a quick snatch to get a free run at the quarterback. That might have been the only rep Sweat won against Risner the entire game.

Overall, Risner is a plug-and-play guy who should prosper in the NFL. He’s a bit unorthodox with his feet, but his lower half is incredible strong and he’s nimble in pass sets. He should be able to clean up his footwork at the next level, and if he does we could be talking about a perennial All-Pro talent.