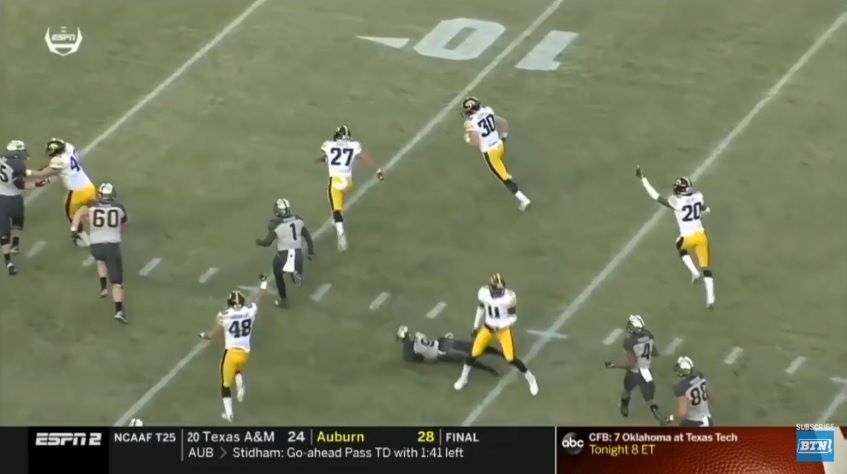 Iowa’s Amani Hooker has a legitimate chance to see his draft stock soar if he can put in a good performance during this month’s NFL Combine. His athleticism is the only aspect of his game that needs to be confirmed as his tape already speaks for itself and it only speaks good things. Hooker really took the ball and ran with it during his junior year, recording four interceptions and winning Big Ten Defensive Back of the Year.

The Iowa safety has a natural feel for sitting in coverage as his instincts guide him to the ball making him a true ball hawk. Hooker excels at sitting in his zone, keying in on the quarterback’s eyes and putting himself in position to undercut the throw. While the elite quarterbacks may be able to look him off, Hooker makes lesser quarterbacks pay for their mistakes. On the second interception, Hooker is lined up in the slot and makes a great play on the ball, showing off his reach and takes it to the house. The Iowa safety has elite ball skills that will propel his draft stock.

What impressed me most about Hooker’s game is his route recognition abilities and feel for what is happening around him. Not only does he have great instincts, understanding where the ball is going but he is able to act on that rather quickly. Watch him on the play above, as he drifts and breaks towards the sideline anticipating an out route by Iowa State receiver Hakeem Butler. Hooker is able to get a fingertip on the ball which may have thrown off the pass trajectory enough to result in Butler dropping the football.

There have been a lot of questions on if Hooker has the make-up to be able to play the dimebacker role. I certainly think Hooker can do it, as he has the skill set versatility needed to succeed in dime situations. Here he is not lined up at safety but in man to man coverage in the slot on Indiana receiver J-Shun Harris II, who is incredibly quick at just 176 pounds. Despite this, Hooker sticks on Harris like glue and closes on the play quickly, resulting in fourth down.

Hakeem Butler makes another appearance and once again Hooker has him under wraps. Despite Butler having a six-inch height advantage on Hooker, he is unable to box him out for the jump ball. The Iowa safety stays on top of Butler, not allowing him to out box him or beat him off the line, resulting in an incomplete pass. His physicality and blue-collar toughness to compete with players who have obvious size advantages really helps push Hooker’s game to the next level. Iowa frequently put Hooker in the slot in the red zone, another way for the Iowa defense to utilize one of their best contributors.

Hooker is extremely physical at the top of routes, not allowing any easy catches for opposing wide receivers. Here he is breaking up a key fourth down attempt by being combative at the point of attack and knocking down the throw.

The Iowa safety will still just be 20-years old by the time he is selected in the 2019 NFL Draft, which only increases my hopes for his play. If this is the production he is providing at just 20, imagine what his ceiling could be. Hooker comes ready with not one, not two but a handful of NFL ready traits. He is a natural ball hawk with great instincts and awareness in coverage. He has good size for the safety position and knows how to use it, showing physicality in coverage, even against bigger opponents.

What separates Hooker from the numerous other safety prospects is how his toolset could be utilized in many different manners. Iowa knew they had a special player on their hands and used Hooker in numerous roles, from cover two safety to slot corner to even matching him up against the opposing team’s best receiver in the red zone. The team that adds Hooker to their roster is getting a young player who can contribute in a lot of ways. With his high ceiling and ballhawk abilities, Hooker should make an impact sooner rather than later at the next level.

Games Watched: vs Iowa State, vs Mississippi State, vs Nebraska