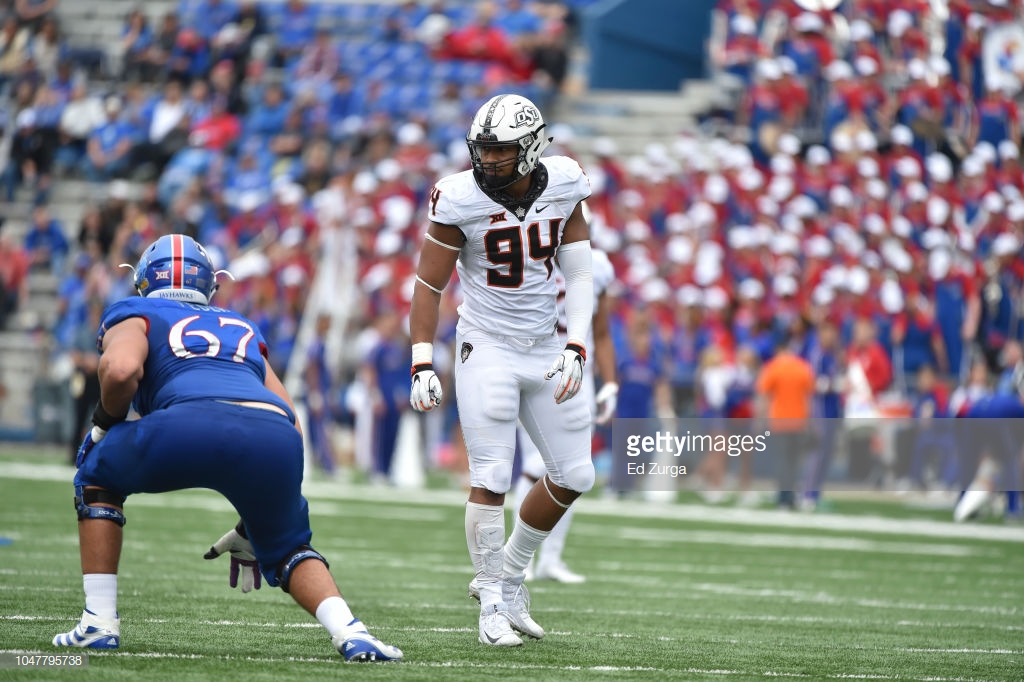 Jordan Brailford (#94) had a productive junior season at Oklahoma State and parlayed that into and invite to the East West Shrine Game where he had 3 tackles, 1 sack and a fumble recovery. He played primarily as the weak side defensive end for Oklahoma State lining up in the 5, 6 and 7 technique positions in 2017. This year under new defensive coordinator Jim Knowles he was moved around much more. They played quite a bit in a 3-3-5 formation in 2018 and Brailford often lined up as the middle linebacker off the ball.

This flexibility is a good thing to have in today’s defenses. Being able to line up players in multiple positions pre snap to confuse the offense is a benefit defenses are always trying to find.

Against the run, he showed a solid ability to set the edge to force runners inside, showed quickness to chase down the line of scrimmage from the backside and improved on his ability to make plays from off the ball. Later in the season, he became more comfortable lining up as the Mike and more plays having a 10 tackle (8 solo) game against West Virginia.

Vs Oklahoma, playing on the right end. Follows the pulling blockers away from him and is able to chase down the RB for TFL.

At Kansas, from off the ball on the left side. Reads the play and attacks quickly into the backfield and throws down the RB for a loss.

Vs West Virginia, lined up off the ball over the RG. Shows good pursuit through traffic to make the tackle after a short gain.

As a pass rusher, he lined up on both side on the edge in both a 2 and 3 point stance. He has a solid first step and liked to use a rip or long arm when rushing up the edge. His best move was a spin inside where his first 3 steps press outside before a quick spin inside. This moved improved throughout the season. You can see a compilation of his sacks here.

Vs Oklahoma, lined up on the left as the 5 technique. Oklahoma is trying to set up the screen. Oklahoma State sends 2 guys through the B gap and Brailford uses a rip to the inside to get to the QB.

At Kansas, he starts off the ball and moves to the right edge pre snap. Gets good burst on this rep getting the LT to open up his hips. He gets pushed up the arc a bit but keeps working to get the sack

At Kansas, from the left edge in a 2 point stance.  He doesn’t regularly show good bend on the edge but this was a good rep. Speed rush to the outside to get the sack.

At Kansas, lined up as the MLB off the ball. Good acceleration to the LOS, some agility to work inside of the center and wrap up for the sack.

He was also used more often in coverage. Not a lot but enough to get his feet wet.  He was only used in Zone coverage and didn’t have a lot of chances to make plays but it will be something he will likely be asked to do in the NFL

Vs Oklahoma, lined up inside of the slot on the left side he gets a push on the slot to redirect and reads the in route coming underneath and makes a tackle on Marquise Brown (#5).

Many undersized defensive ends in college often have to make a position change and become outside linebackers. In this case, Knowles may have been on the right track moving Brailford not only off the ball but to the middle.

As a pass rusher, I came away unimpressed. He’s not consistently quick at the snap, has poor hand usage, doesn’t bend very well and gets handled too easily by blockers.  As an off the ball linebacker there were encouraging signs that he may be a better fit there.  He played more aggressively, definitely made more plays in the running game and has shown at least some ability to play in Zone coverage.

I think he would best fit as and inside or Will linebacker in the NFL. He’ll likely be making a position change wherever he goes but with some growth mechanically and creative coaching he could eventually be an impact player.