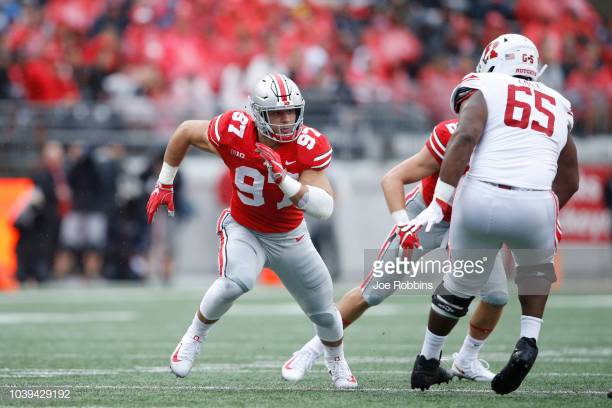 – Fantastic first step-quickness.
– Easily disengages from would-be blockers with speedy hands.
– Full of counters to defeat o-line aka swim move, spins, bull and speed rushes, push and pull, flatten or dip inside.
– Sets edge well, gets hands up and extends while not giving ground.
– Solid wrap-up tackler.
– Moves up and down the line of scrimmage pursuing the ball carrier.
– Can kick inside for maximum impact on third and long situations.
– Finds the ball quickly and usually gets himself in the best spot to impact the play.
– Flips sides effortlessly.

– Missed all but three games his junior year due to an abdominal/core injury that was corrected by surgery.
– Can get caught off balance at times if he overextends himself.
– Suited for a three point stance position aka not a good candidate to play outside backer.
– Might be maxed out physically.
– Never played extended snaps due to depth of the Buckeyes defensive line.

Lined up split out wide right in an almost sprinter’s stance about a yard away from the offensive tackle, Bosa explodes off the snap removing the yard cushion between he and the lineman. He then takes a small inside step that forces the tackle inside for a step, and then quickly swims outside. The Buckeye flattens out and disengages from his blocker while setting the signal caller in his sights. The defender rips through the quarterback’s mid-section, wrapping him up, and then violently brings the play to an end.

On a 2nd and 4, Bosa lines up between the tackle and the tight end. At the snap, he comes out of his stance lower and extends his arms which prevents the tackle from controlling his movement. The defender dips and swims by the blocker,then finds the runner despite being off-balance. Yet, Bosa still manages to body block the Badger back to the ground for a yard loss.

He never gives up on the play.

Bosa lines up almost heads up on the tight end on another 2nd and 4 play. He gets underneath the blocker immediately off the snap, sets his base, and forces the tight end away. This makes that blocker go inside to try to pick up a different defensive linemen. That allows #97 to swallow up the Wolverine runner like a catcher squeezes a fast ball over home plate. Stand your ground, force your blocker onto someone else and smash the ball carrier, all in a day’s work for Bosa!

With just 11 seconds to go in the Michigan game, Bosa lines up 2 yards away from the left offensive tackle in his sprinter’s stance. He dips inside at the snap, which forces the tackle to take a bad angle, and #97 quickly squirts right around the lineman. A Wolverine back picks the defender up, but Bosa is too powerful and throws the runner aside. #97 reaches his big, long arms out grabbing the signal caller wrapping him to the ground with a fellow Buckeye defender to seal the game.

Projection: Should be top pick in NFL Draft, but could slip to top five depending on trades