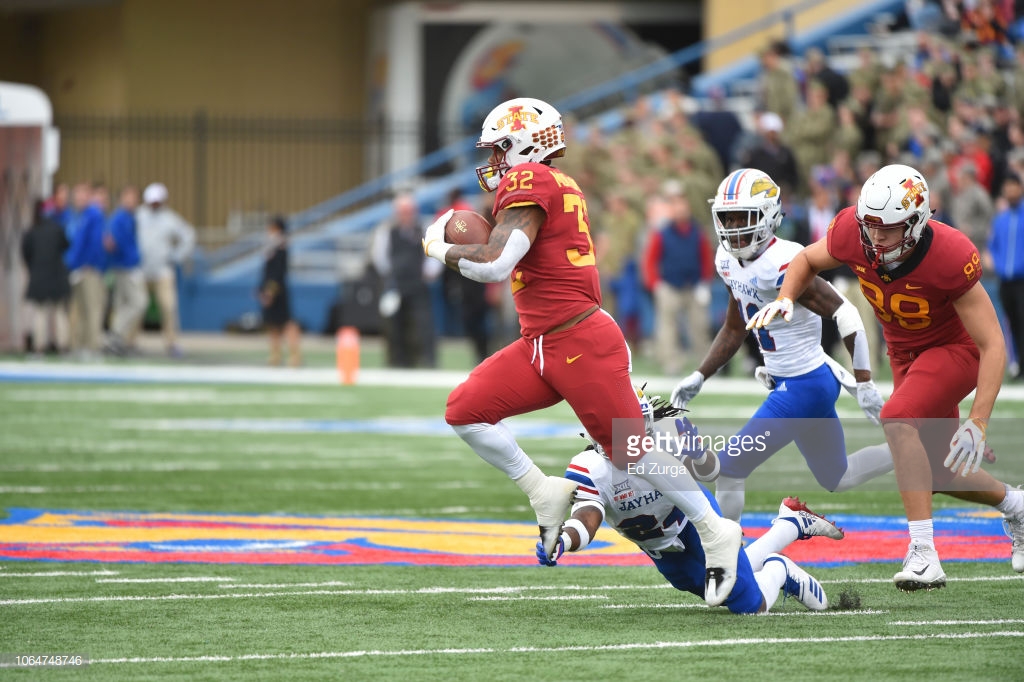 –Good balance, decent leg drive, and exploits small creases while running to daylight
–Gets to full speed in two steps, has quick bouncy feet, and moves well side to side
– Has nice body control and effective pad level getting low with loose hips
–Near the goal line and short yardage situations, he busts through the line of scrimmage like a wiry corkscrew burrowing his way to the other side
–Uses spin moves or stiff-arms to create space between himself and his would be tacklers
–Has soft hands, catches the ball in stride, and can adjust to poorly thrown passes while running crisp routes

–Sophomore and junior years got a lot of touches behind an abysmal offensive line.
–Tries to go to the corner store too often, breaking plays outside when he should kick them back into the teeth of the defense.
–Lacks an explosive second gear
–Shows effort on pass blocking, but limited competency.

On a 3rd and two, the offense lined up in a spread formation with the runner to the left of the quarterback in the shotgun formation. At the snap, the full back seals off the backside end, while Montgomery reads his blockers seeing that the designed hole didn’t develop. The back bounces out right racing outside as he helps his right tackle take a few defenders out of the way. Montgomery swats a defensive back to the ground while jump cutting away and breaks the play even more outside while stiff-arming another defender on his way out of bounds.

It’s a 1st and ten in the shotgun with the back beside the signal caller again. The ball gets hiked low and Montgomery works his way into the flat unnoticed while his quarterback gets his bearings back. The runner catches the pigskin cleanly in stride and tries giving the safety a little dance. The defender reads his hips and is not fooled, but is still caught off balance. Montgomery twists to create an 8 yard reception when it should have stopped after a 2 yard gain. It was his balance and determination that created additional yardage.

Once again out of the shotgun beside his quarterback on a 2nd and one, Montgomery takes the handoff and glides down the line of scrimmage laterally while reading his blockers get a hat on a hat. He avoids contact at the edge of the line of scrimmage, and then dips back inside as the deep safety tries to lasso him down. The Cyclone runner reaches down while keeping his balance and runs through that tackle attempt. The back spins once more then gets tackled by two defenders while leg pressing them a few yards down field. His vision and amazing balance took a loss and changed it into a 15 yard gain!

On a 4th and one, lined up once again in the shotgun formation to the left of his signal caller, the end and wingback flip over to the strong side. This re-alignment forces the majority of the Mountaineer defense to focus on the wide side of the field, leaving them susceptible to a counter play. Montgomery explodes towards the weak side into the line of scrimmage, gets small, pops out while reading his blockers. He cuts back inside for a step which causes the outside contain man to lose him for a second, and then bounces back outside racing down the sidelines for a 35 yard gain.