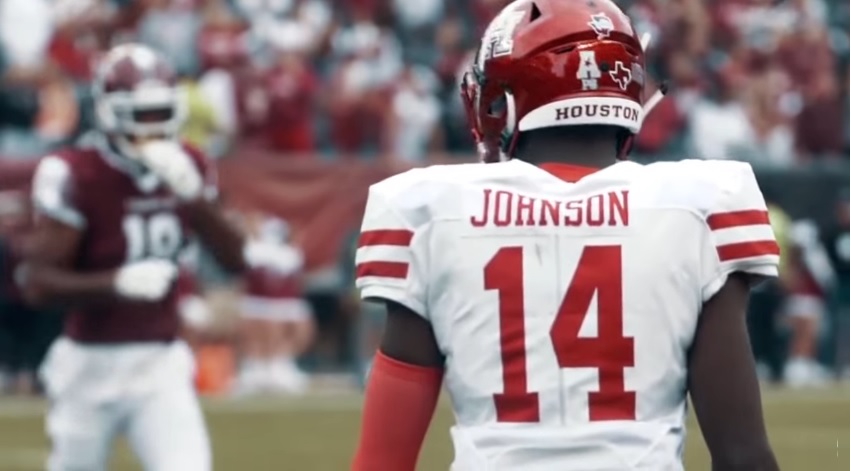 Wide receivers are seemingly growing more and more each year.  A quick look at the top 25 WR’s in this year’s draft and there are at least a dozen that are 6’2” or bigger. Look that the list of corners and you’ll find about half of that.  To defend length defenses need length.

Isaiah Johnson (#14) has length.  He is a converted WR who switched to the defensive side of the ball 2 years ago. That’s inexperienced to bring to an NFL team but any defensive back coach will look at it as a positive.  Fewer bad habits to break and can teach him to play exactly how their defense wants to use him. He played primarily the right CB but did see some time on the left.  He has experience playing in different coverages.

He looks comfortable at playing Press Man at the LOS. He has the length in his arms to get a jam on the WR and has quick hips to turn and run with the receiver with ease.  He stays close and uses the sideline to his advantage and can run with just about anyone.

In Press bail or off Man coverage, he has good COD to click and close on the short area passes and can get on the receiver quickly. He keeps a big cushion when in this coverage, seemingly not wanting to get beat deep, but allows easy catches in the intermediate level. This can probably be improved by playing flat footed for the WR’s first three steps before he starts his pedal. With more reps he can get more confidence and trust his speed.

Vs Texas Tech, he’s in Off Man coverage and WR runs a quick out underneath him. He closes on the ball quickly and is able to get a PBU.

Vs Tulane, he bails at the snap but keeps his eyes on the QB an easily undercuts the WR for the INT.

He didn’t play a lot in Zone but seemed to recognize WR’s in his area well enough and has the ability to close on them quickly.

At Tulane, with no WR’s split to his side, he’s lined up over the TE on the wing. He sticks with the TE until he sees the shallow cross which he closes on quickly to help ensure the incompletion

Vs Arizona, he shows the advantage of length. With trips in front of him and safety over the top, he gets under the route and gets up to get a hand on it.

Ball skills should improve with his confidence playing closer to the receiver and his length can only help to break up passes. The more he plays in phase, the more chances he’ll get. Tackling is a mixed bag. Sometimes he shows aggressiveness and attacks the runner and other times he avoids the contact or dips his heads and struggles.  He struggles to get off blocks and with improved effort and physicality I think he can become better.

At Texas Tech, he’s lined up on the outside WR and reacts quickly to the pass inside and attacks to get the stop.

Vs South Florida, he’s playing Press Man on the right side. The route leads him inside to where the RB has a big hole and he has his best tackle in the games that I watched. Wrap, lift and drop.

Vs Memphis, here’s a bad example trying to make a tackle. He’s hesitant and dips his head and whiffs on a long TD run.

There are positives and negatives with every player and sometimes when it comes down to choosing between two players there are certain things that can tip the scale. Physical tools are one of those things. Every year you hear about the height/weight/speed guys at each position and Johnson fits that category.

The Steelers need DB’s and will likely draft one early. I don’t see Johnson being that guy. But if they want to double dip and take a player with potential in the later rounds, where a lot of teams just look for athletes, then they could do worse than letting him be a backup while honing his skills.