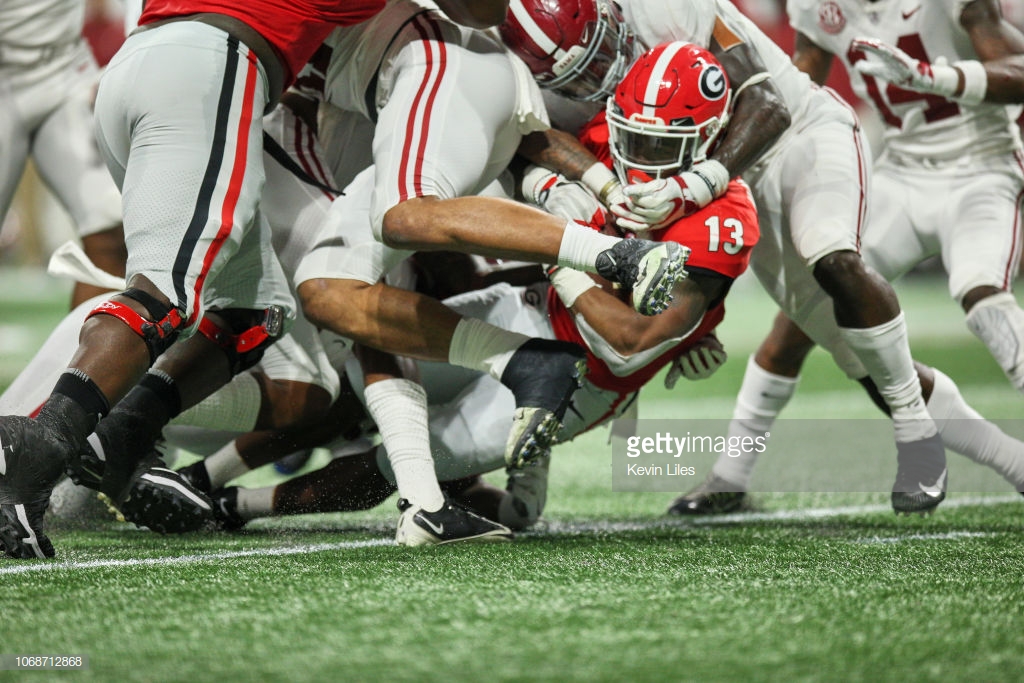 – Has bouncy feet, amazing balance, and doesn’t give defenders much to hit.
– Uses spins, stiff-arms, and jump cuts to keep the defenders on their heels.
– Gets low with a good center of gravity while pumping his legs to move the pile.
– Exploits even the smallest of creases on the line of scrimmage, and keeps both arms on the ball when bracing for contact.
– Second gear once he reaches the open field makes him dangerous.
– The young runner has a nose for the endzone.

– Not very experienced with Nick Chubb and Sony Michel playing in front of him.
– Hasn’t gotten more than 20 touches in a game.
– Has seven career receptions.
– Bounces a lot of his runs outside, and got caught from behind on too many of them
– Leaves his feet too often (which leaves Holyfield’s ball security at risk)
– Glancing around too much during pass protection when the back should have set his feet and got low taking on blitzers

On a 2nd and 10, the runner lines up in the shotgun to the left of his quarterback with his Bulldog offense in a four wideout spread formation. With the ball securely in his breadbasket, Holyfield gets low, reads his blockers, and decides to bounce laterally to the outside as his designed crease is collapsing. He bursts towards the sidelines and lunges towards the first down marker for a nine yard gain  while getting too high out of his stance. The back created more than what was there, but he might have been more successful if the runner would have pressed the line of scrimmage immediately.

Starting off once again in a four wide spread formation and lined up to the left of his signal caller, Holyfield gets the pigskin and scans the line of scrimmage. With the back side defensive end bearing down, the runner slips through the crease created by his center and right guard. He gets to full speed in about four steps and then lines up a safety that is in his way. Instead of trying to juke the defender, Holyfield gets both hands around the ball and explodes through the Tiger defensive back for an 18 yard gain. It was his brute strength and determination that were on display during that run!

Trailing by 16 points with a little over a quarter left against LSU, Holyfield gets the handoff against a strong Tiger seven man front. The back jump cuts while sinking his hips to get through a sliver on the line of scrimmage. That closes sharly and he is forced to smash into a defensive back. This doesn’t slow the runner down as he keeps moving the pile and is finally brought down at the 10 yard line (a 13 yard gain) with five LSU Tigers draped all over Holyfield.

Lined up as the single back in the red zone, the runner barely sells his fake handoff, then sets up off-balance and too far right to protect his quarterback. A defensive lineman burst through the first line of protection as Holyfield is trying to recover from his bad foot placement. The back barely makes contact with the defender, which allows his signal caller to take a big hit. Holyfield needs to set his feet and keep a watchful eye on the inside of the impending rush if he wants a chance at becoming a starter at the next level.