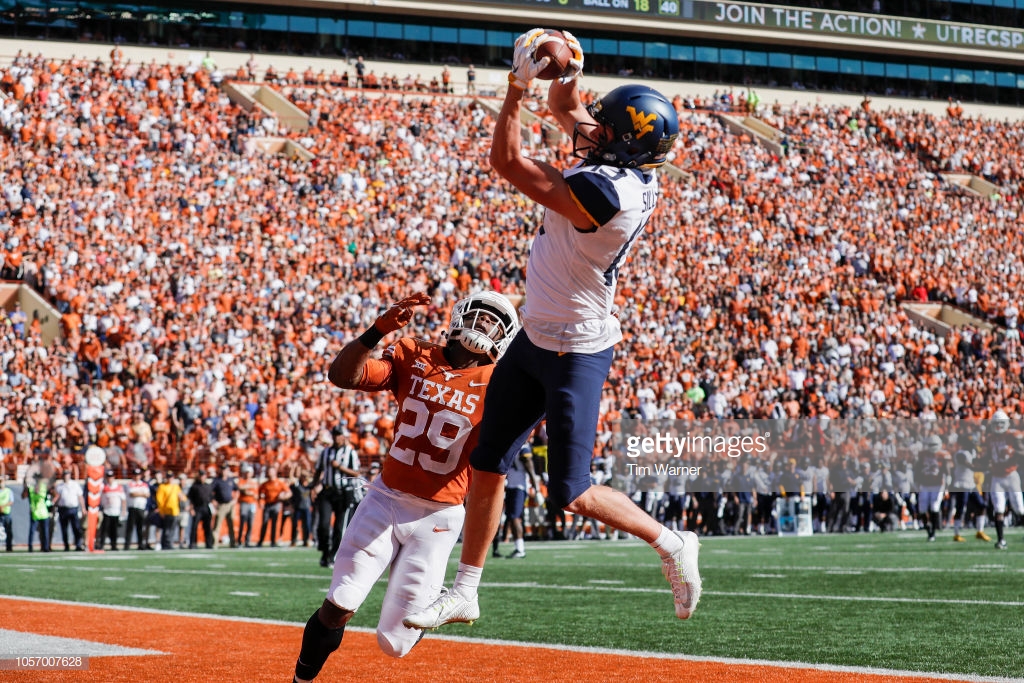 West Virginia wide receiver David Sills V really started picking up steam at this year’s Senior Bowl where he showcased his physical abilities. What is incredible about Sills is his size, which jumps out at you right from the get go. At 6’3, Sills has the size and length to be a deep threat and red zone receiver. Don’t believe me? Well, the West Virginia receiver has recorded a first down or touchdown on 85 of his 126 receptions over the last two years.

Sills is not the fastest or most athletic wide receivers in this year’s class but he still uses his strength to be a deep threat. The wide receiver is a winner in one on one situations and frequently wins battles for contested throws. Watch on the play above as Sills works through some obvious pass interference from the defense back and still manages to come down with a touchdown. He has recorded 33 touchdowns over the last two seasons as Sills has been almost impossible to defend in the end zone.

Dread it. Run from it. Sills will still score. On the impressive touchdown above, the WVU receiver uses a jab step inside to gain separation to the back of the end zone. The play above is one of the best examples of Sills’ ceiling as he combines quick, effective footwork with his elite size and red zone ability. He is not one to wait for the ball to come to him as the WVU receiver leaps over the shoulder of the defender to attack the ball at its highest point.

Averaging over 15 yards per catch but despite not having elite speed or athleticism, you may be surprised to hear that Sills is quite the vertical-straight line threat. While it takes a few strides for him to hit full speed, the WVU receiver once again uses his smooth route running to create the separation he needs. Sills is very talented in using a jab step and head fake to get a step on his competition.

Another aspect you may not know about Sills’ bio is that he converted from quarterback to wide receiver just two and a half years ago during his freshman season. Despite having less than three years of experience at wide receiver, Sills is a quick learner. He understands coverage spacing and uses sound technique in his route running. The stutter and head fake are frequent parts of his game and for good reason because Sills is very good at it. He also works his way back to the football quite well and has a good understand of coverage, constantly sitting in open zones.

His hands are the biggest flaw in his game as Sills does drop a fair share of throws coming his way. Surprisingly, he seems better at high pointing a football with his hands rather than letting it come into his body. Sills is more likely to drop or have to double catch passes if he allows them to come to him rather than going up and attacking the football. Other areas in which he could improve is his ability to handle press coverage. The WVU receiver certainly has the size and strength to battle press coverage but he has struggled thus far when pressed. Too often he is re-routed or push out of bounds.

Sills has room to grow and there is promise in his abilities. While he is never going to be a speed demon or open field playmaker, he can make it work if used correctly. The WVU receiver projects to be a deep and red zone threat based upon his combative catch skills. If a coach can teach Sills how to use his strength and size to beat press coverage, he could end up as a starter in a few seasons.

Games Watched: vs Tennessee, vs Iowa State, vs Kansas State