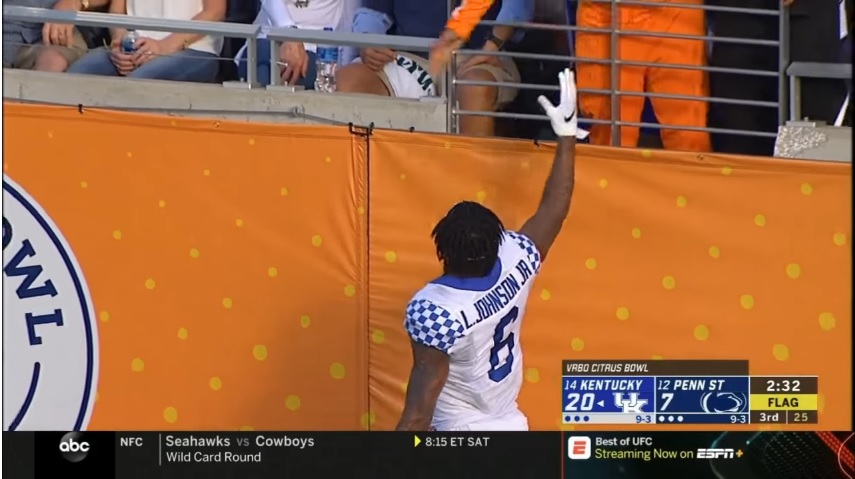 – Elite size and excellent length (32 2/8 inch arms), certainly looks the part
– Length helps him to play the pocket, able to break up passes and make plays other can’t
– Tracks the ball in the air well, good hands to make the play
– Fluidity in his turn out of his pedal to defend the deep ball
– Shows enough long speed to carry vertical routes in man-to-man coverage
– Flashes physicality and hit power coming downhill
– Shows special teams value and ability to block kicks/field goals
– Experience at both outside corner spots

– Shows stiffness and late awareness breaking down and transitioning against breaking routes (curls, digs, etc)
– Change of direction ability, lateral mobility needs work, fighting how tall and long he is
– Struggles with his punch in press man, routinely strikes with the wrong hand, causing his hips to be late getting open and giving a clean, quick release to the receiver
– Good but not great athlete, better straight-line than anything else
– Lacks starting and collegiate experience, only two years at the FBS level
– Very limited production and didn’t make many impact plays

Johnson was another corner prospect who caught my eye with a strong week at the Senior Bowl. But his tape ended up being less impressive as Iman Marshall. There’s still some to like so let’s dive in.

Size-wise, it doesn’t get much better than Lonnie Johnson. 6’2, 210 with length? That’s the type of guy every team is looking for. And he can run too. Good in a straight-line too and can defend the ball vertically.

When he’s able to explode and get downhill, he can pack a punch, too. Like the finish here.

But he’s a raw prospect who shows stiffness trying to transition downhill and has some ugly reps on breaking routes. Like losing the receiver on this dig route. Yikes.

And problems in press man where, in theory, he should excel. Corners need to punch with the hand opposite the release of the receiver. If he releases to your inside, you punch with your outside hand. Outside release, punch with inside hand. That opens up your hips and allows you to turn and run. An area Johnson is still learning, no surprise for a guy playing just two years at the FBS level and sat out a year at his junior college.

Do like the finish in the first clip but receivers in the NFL will make you pay for stuff like this.

I view him as a Cover 3 corner. Good in a line. Everything else is questionable. In Steelers’ parts, you can compare him favorably – or not – to Brian Allen. Also see some Jalen Collins in his game too, minus the off field issues.

Games Watched: at Florida, at Georgia, at Vanderbilt, vs Penn State, Senior Bowl