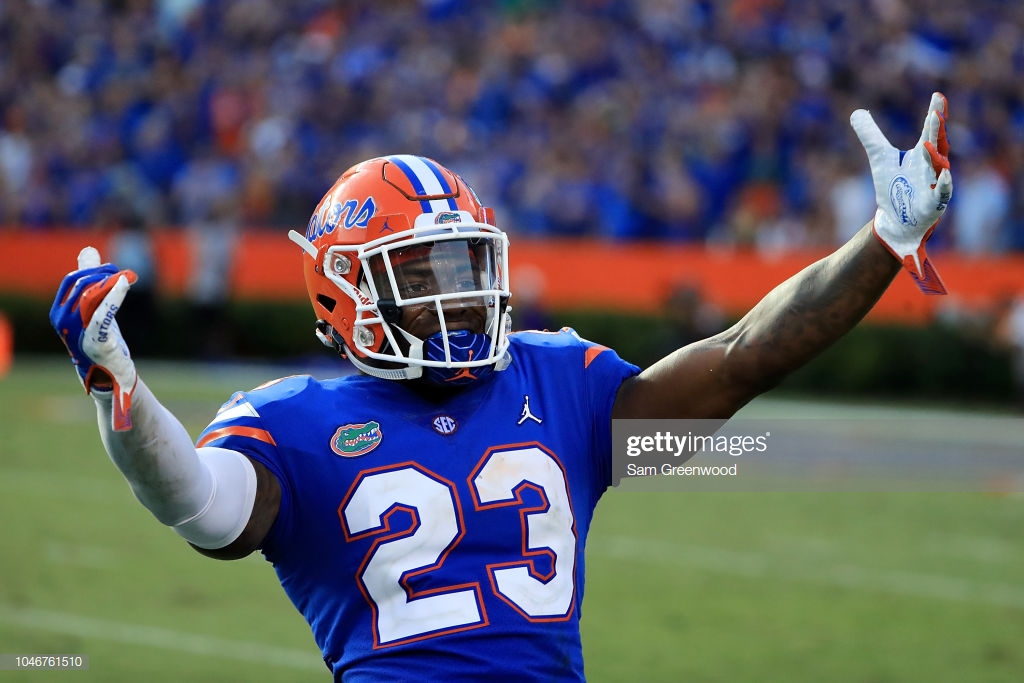 -Versatile chess piece that lined up all over the field at Florida
-Loose hips and quick feet in coverage that allows him to fly all over the field
-Reads QB’s eyes really well and baits QB into throw down the field
-Breaks on the ball quickly in the air and has great sideline-to-sideline range
-Above-average closing speed firing downhill towards the football
-Able to open up/flip hips and run with the best of them
-High-level instincts in coverage and seems very comfortable playing off-man and challenging throws
-Made major improvements from 2017 to 2018 as a tackler
-Communicates a ton of the field, can see him gesturing to teammates before nearly every snap to make sure guys are lined up properly

-Not an overly physical striker and his run support from single-high is shaky
-Will get caught staring into the backfield in man coverage and will lose feel/sight for receiver, leading to some big plays
-Appears much more comfortable playing shallow zone rather than man coverage
-2017 tape left a lot to be desired from a tackling standpoint
-Will have some head-scratching effort plays on backside pursuit, but motor isn’t a concern overall
-A bit of a ‘tweener; what position will teams really view him at?

-Played in 37 career games at Florida and finished three-year career with 161 total tackles, 15.0 tackles for loss, 4.0 sacks, 9 INTs, 12 pass breakups, 3 touchdowns
-Named Chick-Fil-A Peach Bowl Defensive MVP with two interceptions and a touchdown against Michigan in 2018
-Named Outback Bowl MVP in 2016 after recording two interceptions in a win over Iowa, becoming second freshman in Florida history to earn bowl game MVP award (Emmitt Smith, 1987)
-Worked his way into the starting lineup full time in 2017 after Marcell Harris went down with a knee injury during spring workouts

If your favorite team is looking for a defensive chess piece in the secondary that can line up all over the field and make an impact snap-to-snap, look no further than Florida safety Chauncey Gardner-Johnson, who is a junior that declared for the 2019 NFL Draft after a strong junior season.

Gardner-Johnson appears a bit undersized on tape, but his play more than does the talking for him. He packs a punch as a tackler, has no problem working through blockers on the boundary, and has an explosive lower half that allows him to fly sideline-to-sideline to make plays.

I haven’t done any formal positional rankings just yet, but I’d be hard pressed to find a better safety in this class than Gardner-Johnson.

Need a guy with plenty of range and can hold down the centerfield job in the NFL? I have your man.

Now, just one of these plays in from a centerfield role, but just look at the fluidity in his hips to open and run here and make a great play on the ball in the air in each one. Notice that both of these picks come in the red zone too.

The first one against South Carolina in 2017, Gardner-Johnson baits Jake Bentley into this throw. The Florida safety is reading the quarterback’s eyes the entire time and has supreme confidence in his athletic abilities to get to the wheel route in plenty of time. I love the way he highpoints the football too.

The second clip against Michigan in the Chick-Fil-A Peach Bowl is some really heady stuff. Gardner-Johnson runs with the inside receiver just enough off the line to let Shea Patterson think he has 1-on-1 coverage down the field. You can see Gardner-Johnson break off right before Patterson loads up for the throw, giving him plenty of time to track the football and make the pick.

As a defender near the line of scrimmage, Gardner-Johnson is really good at avoiding blocks and locking guys up for tackles in space. That was a significant improvement from 2017 where he really struggled to come downhill from a true safety position to make plays.

Here against Florida State late in a tough 2017 season, Gardner-Johnson puts an awful rep on tape trying to tackle Jacques Patrick in space after a short completion over the middle.

You can see Gardner-Johnson go to his knees before the initial point of contact, almost as if he’s trying to avoid contact with the bigger running back. That was nearly wiped out of his game entirely in 2018 as he was ultra aggressive coming downhill in the box.

These are two similar plays as Gardner-Johnson is lined up in the slot prior to the snap. He’s really good at slipping under blocks to make plays on the boundary like this, which could lead to him being a corner in the NFL rather than a safety.

He has a nose for the ball though and once he gets his hands on you like this, you’re going to the turf.

I do have some concerns with his aggression in man coverage because he tends to play too much like he’s in zone coverage there, keeping his eyes locked on the quarterback, leading to him losing the receiver for big splash plays. But for a guy with his zone coverage instincts and his tackling abilities in space, he’s a guy that should come off the board on Day 1 and make an immediate impact in the new-age NFL that leans heavily on sub-package defense and versatility.