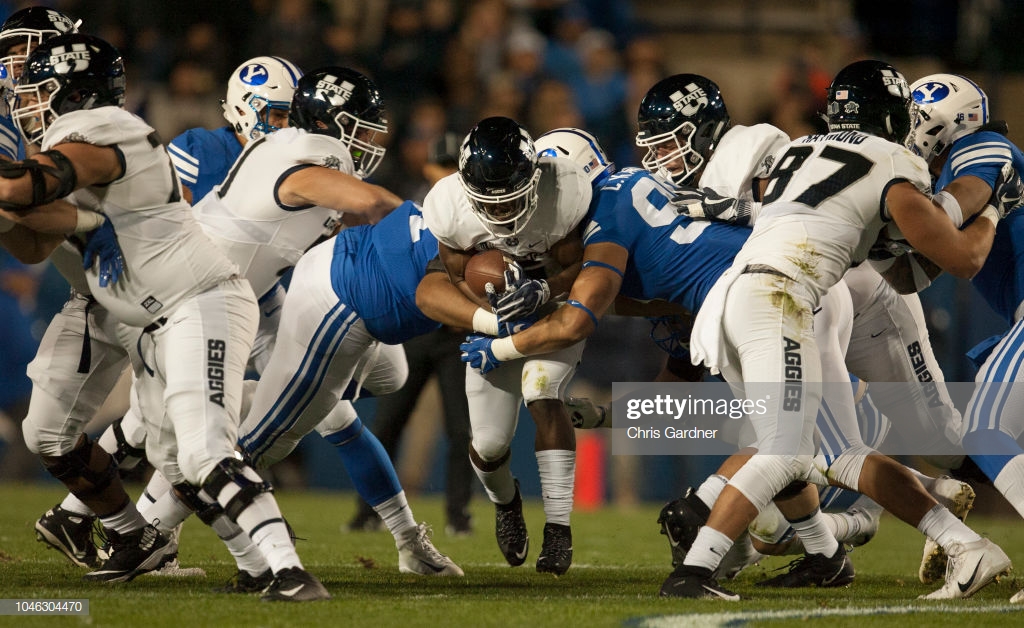 As a 5’8” running back, Darwin Thompson would most likely, at first glance, be thought of as a shifty running back akin to that of Tarik Cohen. The only issue is he is nowhere near as fast as Cohen and he also is just does not have the insane joystick ability of Cohen, although he has that in his game still. Thompson has an element of power into his game because of his absurd strength. That strength consistently shows up on his tape, as even with his size, he is surprisingly better at pass protection than you would think he is with his frame. Granted, he has work to do in pass protection, but his raw physical strength certainly gives a big benefit there, and it does not sacrifice his finesse, as he is as fleet-footed as they come.

Thompson thrives in open space, and one of the easiest ways to do it is screens and swings. Not only because of his dynamic ability to win one-on-one and power through people in space, but also because he has extremely natural hands. He knows how to ‘see it through the triangle’ and high points this ball even though no one is around him. That bodes well to his receiving prospects at the next level no matter the way it’s sliced.

The more impressive part of this is the elusiveness Thompson shows in the open field. His footwork is simply a slight stutter and a quick jump cut. It takes him one step and that shows efficient footwork. NFL teams will love that because it maximizes yardage, and with good long speed but not great long speed at his size, Thompson is going to thrive because of that ‘Cohen’ in his game. Those quick, efficient steps are what makes Cohen who he is, and Thompson inherited that part of his game.

However, even more convincing to the fact that Thompson can thrive at the NFL level is his ridiculous contact balance. Here against Hawaii, Thompson makes an insane play. He is getting battered from all angles but somehow stays up due to fantastic core strength and hip flexibility. It is a combination of great conditioning and native athleticism, but it makes Thompson a unique RB at his size because he just does not go down with contact. Besides, over sixty percent of his yards this year were after contact.

Still, even with that great balance that Thompson displays, he does not lack the slipperiness of ability in the open field to thrive at his size. This is a fantastic job of pressing the line to draw the DE in and then bouncing it outside with a quick jump cut. Thompson understands how to press the cut off of that with his quickness and short area burst. His lack of long speed does flash here because he runs out of gas near the end and almost gets caught, but he has dynamic ability to work off the line and make plays according to it. If can improve and work off his line and read the flow of defenses better, he should become even better in this area and be able to exploit that quickness more.

I am not sure what to say about this play other than a simple wow. 5’8” guys shouldn’t be able to drag guys with them, but he drags this LB seven yards with him at least. His lower body strength is fantastic and his leg churn is the best I’ve seen in this class period. The question is if this can translate to the next level, to which I say absolutely. Maybe not to this absurd level, but the leg churn is a valuable tool in short yardage situations and on the goal line and will absolutely help him at the next level.

There is just no end to Thompson’s motor. When contact balance, leg churn, strength, and motor combine, you will get plays like the one above. That is impressive and is going to flash to NFL teams every time they watch this play. It speaks not just about the type of effort Thompson puts in, but more so about his fantastic character too.

Darwin Thompson projects to be of the same mold of Dion Lewis, Tarik Cohen, and Darren Sproles, but less shifty and far more powerful with better contact balance than any of those guys. He will work best out of council due to his frame and its uncertainty of withstanding punishment of a full-time starter, but Thompson should be a dynamic, big play complement that can come in on third downs in a pinch.

Games Watched: Vs San Jose State, vs Michigan State, vs Wyoming, vs BYU, vs New Mexico