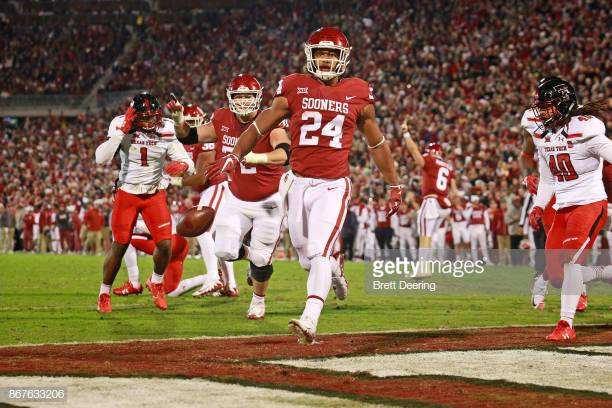 – Good frame, well put-together player
– Downhill runner who doesn’t dance and get what’s not there, sees the hole and hits it, one-cut back
– One-gear player but shows better than expected long speed when he gets into open grass, able to make decisive cuts in space to make safeties miss
– Size and strength to run through arm tackles
– Didn’t catch many passes but showed soft hands and ability to catch away from his frame
– Productive when healthy, had great junior year
– Doesn’t have a lot of wear and tear

– Poor change of direction before he gets going, takes too many steps to gather himself and search for the hole on zone runs
– Less effective in shotgun when sidecar, better off getting downhill immediately in I-Form or in pistol
– Not as powerful as frame suggests, doesn’t push the pile like you think he could, and struggled some in short-yardage/goal line situations
– Struggles to get to the perimeter and bounce runs
– Problems in pass protection, attempts to get square but drops eyes and has to show more strength and better technique
– Limited production, only really played one season, and not a lot of film to go off of, then failed to workout at Combine due to injury
– Didn’t run a route tree, caught the ball on flares, screens, and checkdowns
– Not much starting experience
– Doesn’t have top end speed and can be caught from behind
– Major injury concerns

– Seven career starts, declared for draft as a junior
– Career: 200 carries, 1285 yards (6 YPC), 21 total touchdowns (16 rushing, five receiving)
– Most work came in 2017, carrying the ball 188 times for 1161 yards and 13 rushing touchdowns
– Tore ACL in right knee in Week 2 against UCLA in 2018 season, missed rest of the year
– Broke left fibular in 2015, limited to two games, then missed all of 2016 with a broken bone in his neck, had to wear neck brace for three months
– Four-star recruit out of high school, named Top 25 back nationwide by most publications, averaged 9.1 yards per carry in his high school career
– Chose Oklahoma over Auburn, Texas A&M, and Baylor among others

Anderson has the size the Steelers generally like in a prospect and I was excited to watch more of him. Unfortunately, it’s a mixed bag leaning to the “pass” side of the draft decision. But first, the good.

He’s a very well-defined runner. Get the ball downhill, make one cut, and hit the hole. That’s how he wins. If he clears into the third level, he has enough change of direction, the big lower half helps him make hard cuts, to make safeties miss and turn good runs into great runs.

Though he’s knocked for his lack of receptions, I see a guy who catches the ball naturally and cleanly. With more work at it in the NFL, getting him involved, Anderson can be an asset.

But if you play him in a zone scheme, forcing him to read, break down, and often make big changes of direction, he’s going to struggle. Doesn’t have that ability and often results in him slowing too far down, taking too many steps, and by the time he finds the hole, it’s closed up.

For a 224 pound back, he didn’t run with the power I hoped. Too many struggles in short-yardage. Granted, that’s not all on him, the line plays an obvious role, but he didn’t push the pile consistently enough for his frame.

The obvious red flag is the injury history. It led to a lack of production, literally one year of tape, aside from about five quarters in 2018, his full game coming against Florida Atlantic. I’m sure several teams will have him off the board because of the injuries to both legs and his neck. Especially for the position, you have to wonder what his shelf life is, despite the guy having about 200 carries.

Anderson’s best, to me, only fit comes in a man/gap heavy scheme that doesn’t run much zone blocking. Let him get downhill with as much speed as possible. If he can find an offense that runs some pistol, he’ll be more effective. Maybe San Francisco? But for Pittsburgh, who runs plenty of inside zone, I’d pass on him. Glen Coffee is one comp I’d put with him.