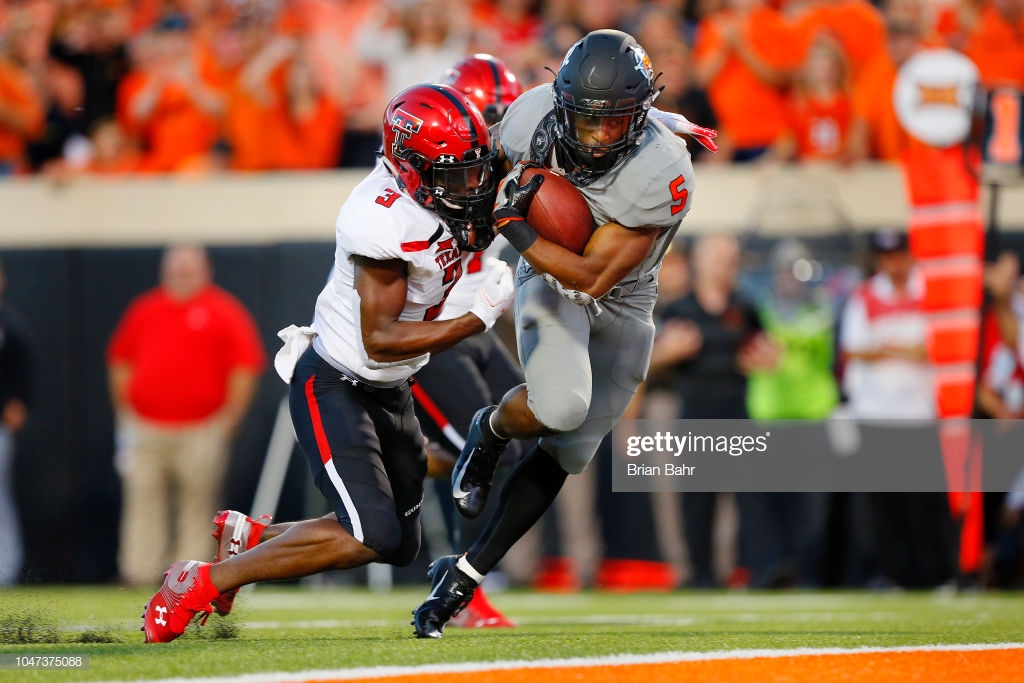 -Legitimate home run hitter with explosive lateral speed to destroy any type of angle
-Great patience and vision for a running back coming out of a spread system
-Powerful lower half that allows him to not only finish off runs, but bounce in and out of cuts in a blur
-Contact balance is good for his frame; rarely goes down on first contact
-Flawless change of direction skills
-Really competes in pass protection and has the want-to to fill that role
-Elusive runner that throttles in and out of moves with ease; impressive spatial awareness

-Ran exclusively out of shotgun/pistol at Oklahoma State, with most runs coming out of read-option
-Lean frame for position and can’t be categorized as a pile mover
-Tends to leave yards on the field due to his propensity to look for home run
-Shaky hands for a spread back; doesn’t seem to trust his hands coming out of the backfield
-Limited pass catching production despite playing in a spread system and being an every-down back

-Played in 36 career games in three seasons at Oklahoma State, starting all 36 for the Cowboys under Mike Gundy
-Finished career with 632 carries for 3,539 yards and 30 touchdowns on the ground, adding 49 receptions for 304 yards and one touchdown through the air
-Led the FBS in freshmen rushing yards in 2016
-Finished just 70 yards short of a third straight 1,000-yard season in 2018
-One of only four OSU running backs – the others being Barry Sanders, Thurman Thomas and Terry Miller – to average at least 100 rushing yards per game in their respective careers
-Ran a 4.4u 40-yard dash at the 2019 NFL Scouting Combine, and added 21 bench reps, a 40-inch vertical, and had a 130-inch broad jump, showing off lower half explosion seen on tape

With James Washington and Mason Rudolph already on the Pittsburgh Steelers roster, I think it’s safe to assume most fans are aware of Oklahoma State running back Justice Hill at this point, at least in name alone.

If not, boy do I have a treat for you.

In a loaded running backs class (no, it’s not as good as the 2018 draft class, but it’s pretty darn good and deep) Hill seems to be flying under the radar despite putting up tremendous production at Oklahoma State in his three-year career.

Despite looking a bit small on tape, Hill plays anything but small. No, he’s not going to run a defender over, but he’s a strong back that has elite speed and is as shifty as they come, all while playing with some impressive contact balance.

Here against Boise State last season, Hill shows off that contact balance that leads to a touchdown against the Broncos. I really like the way he’s able to make his strike area small for the defender, all while keeping his balance when his weight is clearly out over his knees at the point of contact.

His lateral speed is jaw dropping as well. He is able to turn on the jets in the blink of an eye, leaving defenders grasping at air as he bursts into the open field.

I want you to watch the speed Hill picks up as he slips through the hole and into the open field. Once he hits top speed, watch how he destroys the safety’s angle coming downhill, finishing him off with a mean stiff arm on the way to a long touchdown run for the Pokes.

His patience and vision is an underrated aspect of his game. The vision in the open field is one thing, but his vision behind the line of scrimmage and his overall spatial awareness is really impressive.

He trusts his eyes and knows he can outrun anyone to the corner, and that’s just what he does here against Iowa State in 2017 after getting slowed up behind the line of scrimmage.

Getting in and out of his cuts with explosion is a major strength for Hill too. He can cut on a dime and not lose and ounce of speed, as this West Virginia linebacker learned the hard way in 2017.

I mean, look at this. That’s incredible. He is just about bottled up behind the line of scrimmage but he plants his foot in the turf going laterally at full speed and all of a sudden bursts up field past the stunned linebacker, walking into the end zone.

Finally, he’s really good at making defenders miss and avoiding the big hit, saving his body from the normal wear and tear for a running back with his workload.

There’s no way he should have gotten out of this, but that speed move is so quick, and he’s able to pick up where he’s at on the field quickly coming out of the spin move, leading to a pivotal first-down run deep in his own territory.

As a pass blocker, Hill struggles to hold up against defensive linemen and linebackers due to his frame, but he has the want-to, and that’s all that really matters. He can be coached up in that area and can carve out a role in the NFL long-term.

Pass catching will be the biggest question mark with his game, considering he caught just 49 balls in 36 career games playing in a spread offense. His hands are a bit shaky and he seems to battle trusting his hands, but the route running isn’t the issue. He’s very fluid in his lower half and looks comfortable running routes.

Improvement in his hands will go a long, long way for Hill.

Overall, Hill is a guy who has the upside to develop into an eventual starter for an NFL team. He’s a real home run hitter that will add an explosive dimension to the next offense he finds himself in.