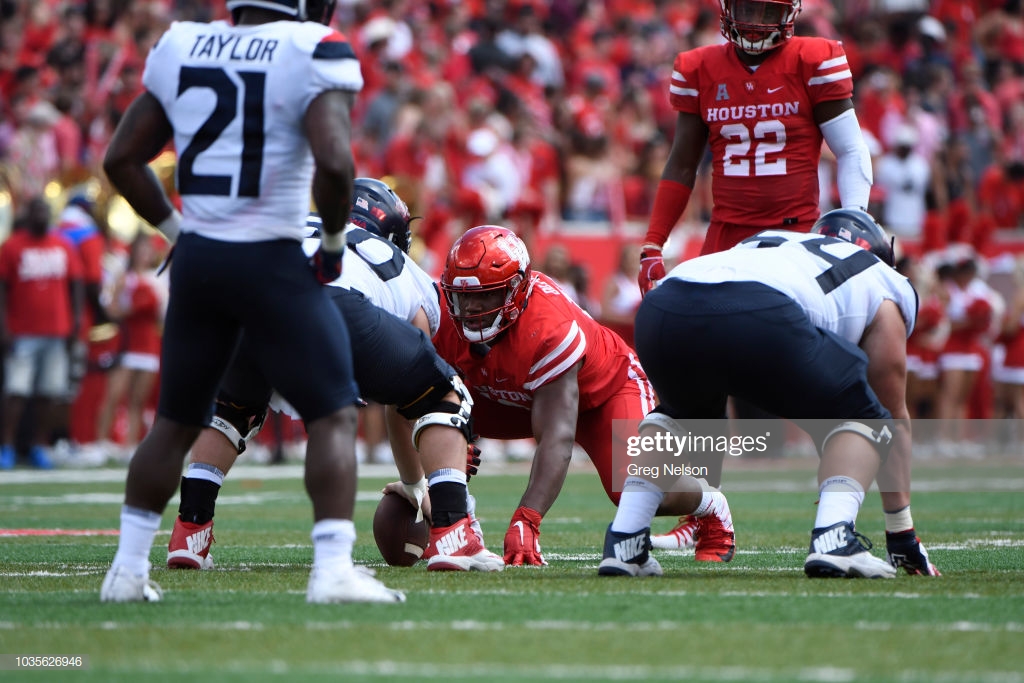 – Small for an interior lineman (height and weight), which at times puts him in bad situations
– Knee injury in 2018 caused him to miss four games
– Only ideal as a three tech player on a 4-3 front, might get dominated in other spots
– Draft twitter has mentioned a conversion to inside linebacker in third and long situations due to size as a designated off-ball rusher (could that work?)

Lines up heads up on the center, #10 fires out in a 4-point stance at the snap. It’s his balance and quickness that command three blockers to him when Houston only sent three blitzers. His pressure might have been enough to force the errant throw. Oliver showed off a good motor on that play.

In the red zone, Oliver lines up on the outside shoulder. Off the snap, he reads a run to his right and gets underneath the lineman’s base. #10 spins off the center’s grasp and swallows the running back up with a little help from a fellow defender! His sense of balance and awareness were shown on that play.

The Houston defender lined up on the outside shoulder of the center and fired into the gap between the guard and center. He clubbed and ripped his way right past towards the quarterback. While Oliver made a diving sack attempt that missed badly, his effort still forced the signal caller to get rid of the ball quicker than he wanted.

Lined up across the right guard on a 3rd and long, Oliver gets past his blocker quickly and already sees the ball fly out of the quarterback’s hand into the flat. #10 races out in an attempt to meet the back in space. While the defender didn’t make the tackle, his athleticism at his size to scream out there so quickly will definitely force offensive coordinators to scheme against him in particular.

Kicked outside as the left defensive end, #10 gets around the slower right tackle with relative ease. Oliver does get caught peeking into the backfield and gets popped by the tackle he blew right past as the ball is handed off. The defender does not give up on the play and catches up with the runner who was slowed down by a big pile. It’s his balance, athleticism, and motor that makes Oliver a factor on every play.

Of course Oliver does not fit the Steelers defense, much like the slightly bigger Aaron Donald did not. He will be best used as a three tech in a 4-3 front or would be an awesome nose if anyone would run a five man front.