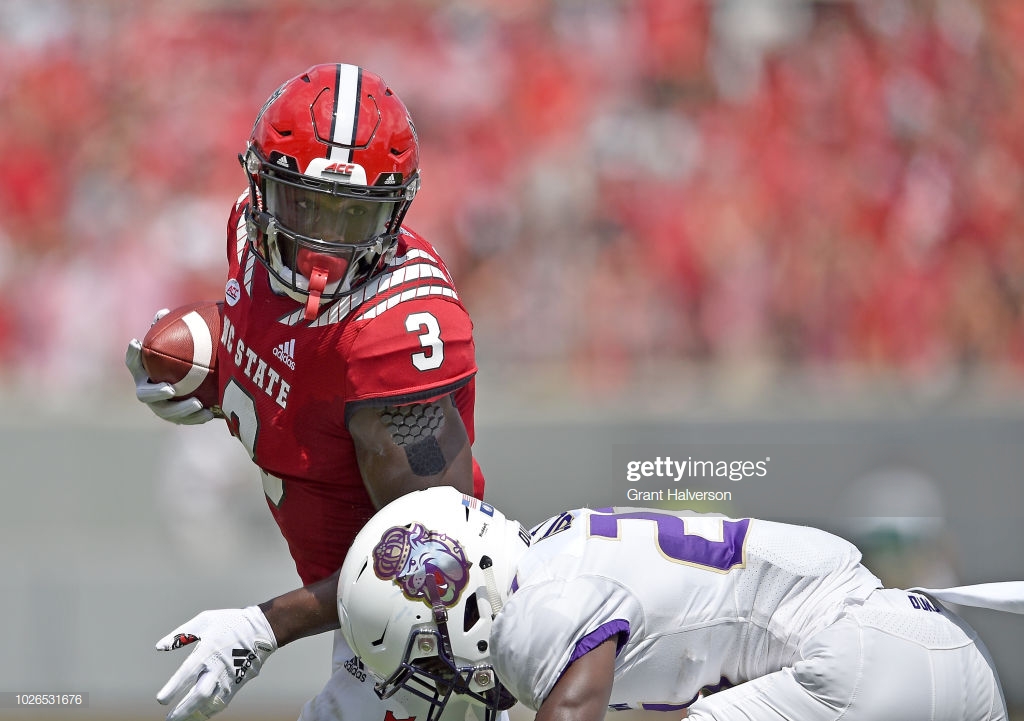 Kelvin Harmon (#3) has the physical tools you want in a WR and the football skills you want watching him on film.

He has a good release at the LOS gets up field quickly to stack the DB in off coverage and a good combination of quickness and hand usage vs press coverage to avoid the jam of the DB and get into his route.

Harmon can run the entire routed tree doing most of his damage on the outside of the field. He was used on screens, digs and slant routes and had success but his abilities on the outside in the intermediate and deep routes were his bread and butter.  He uses a variance of skills to gain separation including stacking the DB and then dropping his hips, pressing in one direction to get the DB to turn his hips and being physical at the top of the route to create space. Against Zone, he has a good feel reading the defenders to find the soft spot in the coverage.

Vs Clemson, lined up wide right he starts on a slant route and drops his hips pulling the ILB his way. He accelerates quickly to get over the top, makes the catch and slips by 3 defenders for a 48 yard gain

At Clemson, he is lined up outside right vs off coverage. Watch as he drops his hips and turns his head to the outside to get the DB to jump. He flies right by leaving four Tigers to chase him. Unfortunately, he short armed this ball. Only drop I saw.

At Syracuse, quick release to the outside and excellent use of hands to push the DB arm off him, he stops on dime and goes up to make the catch.

At Syracuse, again working to the outside, uses a subtle push off just prior to the ball arriving and tracks the ball well over the shoulder

At Louisville, here again he shows his ability to drop his hips with a nod inside, getting the DB to bite and he hits on the go route for a TD

He has good hands snatching the ball away from his body and tucking it away quickly.  He showed comfort catching all around his frame and tracking the ball over his shoulder. He made sideline and back shoulder throws look easy. Strong hands made contested catches with regularity. On some routes, comeback, curls, hitch he needs to work back to the QB to prevent the DB from getting a chance to knock it away.

Vs Clemson, lined up wide right he avoids the jam at the line of scrimmage to get behind the DB. He knows he’s going to get hit but tucks the catch away quickly before getting hit.

Vs Virginia, lined up wide right he shows good body control adjusting to the back shoulder throw for the TD.

Vs Boston College, quickness at the LOS and a shoulder dip to get under the jam. Good strength to absorb the push from the DB in the route and adjusts back inside and low for the reception.

He didn’t show a lot of quickness and agility after the catch to make defenders miss and get the extra yardage in the short and intermediate areas. On deep passes, he was adept at getting behind defenders and threat to take it the distance often.

Blocking is something that I always look for in skill positions.  What they do when they don’t have the ball tells me a lot about who they are. Harmon is a willing blocker, uses a good base and his long arms to keep defenders at bay. He blocks well in the run game and as soon as a teammate makes a catch he is looking to block for them.

At Louisville, love to see this effort. He works inside to get in position against the safety that has a 7 yard downhill head start. His effort and ability to drive him back and sustain the block leads to a TD by the RB.

You can’t tell from the highlights here but I promise you that he lined up on the left side and in the slot.

I was impressed by Harmon. He has good skills to get off the LOS, to create separation and reliable, strong hands.  He can make the tough catch, adjusts to balls well and can make the sideline catch as well. The cherry on top is the willingness and capability to block for his teammates.

With the WR turmoil the Steelers are dealing with would they take a WR in the first round? That partly may depend on how they feel about the progress of James Washington. Or it may be on their recent draft history to find gems later in the draft and their ability to develop WR’s. Can Darryl Drake take over where Richard Mann left off? If so, they can wait to find a WR and address other needs.